Sister brand Popeyes famously grappled with Chick-fil-A in August 2019 on Twitter—an effort that inspired commentary from Wendy’s to “CBS This Morning” co-host Gayle King. Customers wanted to try each sandwich and take a stand (and let everyone know about it). The effort generated the equivalent of $65 million in media value right out of the gate, per Apex Marketing Group. We now know how long that sustained for Popeyes, which is pushing AUVs $400,000 higher than pre-chicken sandwich.

READ MORE: The Chicken Sandwich Wars Will Ignite Again in 2021

The continued success is a credit to Popeyes’ sandwich standing the test of time from a quality perspective, as well as its ability to evolve the stunt from a one-time event into a culturally relevant conversation. The overall and continued growth of a category can’t be mentioned today without Popeyes figuring in.

There were 2.5 billion breaded chicken sandwiches ordered from quick-service restaurants last year, up 9 percent from 2019, according to The NPD Group. Chicken sandwiches (breaded and grilled) were featured in 6.7 percent of all U.S. restaurant orders in 2020 (or 3.5 billion servings).

As of April 2021, NPD Group said roughly 65 percent of the U.S. population ordered a breaded chicken sandwich from a quick-service restaurant in the previous six months.

And you can see below, in an updated chart from commerce data company Edison Trends, how much activity is stirring digitally. 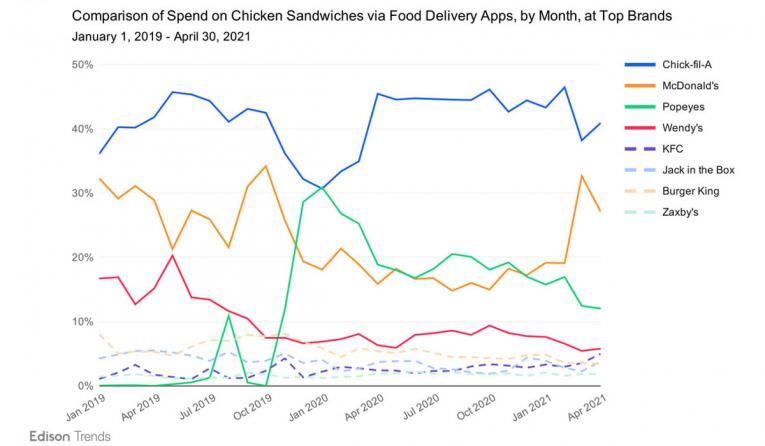 Burger King’s “Ch’King” hit the nationwide scene June 3. The sandwich, two years in development, is hand-breaded. Burger King had to invest in fresh training and equipment to make it. Per CNBC, the name hails from a customer who, during testing, told employees Burger King should change its name to “Chicken King.”

The brand launched with a deal where customers who ordered the Ch’King (there’s also a Spicy Ch’King and Deluxe option) on the BK app or website got a free Whopper.

And a day later, Burger King took to social media. The brand posted it would donate 40 cents up to $250,000 for every sandwich sold this month to the Human Rights Campaign, the largest LGBTQ+ advocacy group in the U.S. In that message, there was an “(even on Sundays)” comment that sent the news viral. It came a week or so after The Daily Beast released a story that reported the Equality Act, a bill that would make it illegal to discriminate against the LGBTQ+ community in most settings, was being railed against by the National Christian Charitable Foundation. Chick-fil-A CEO Dan Cathy is one of the biggest donors of the organization.

during #pride month (even on Sundays 👀) your chicken sandwich craving can do good! we are making a donation* to @HRC for every Ch'King sold 🏳️‍🌈

Back in February, Revenue Management Solutions said Chick-fil-A enjoyed 75 percent awareness among guests for its offering. The company asked consumers to recall brands that offer chicken sandwiches and report on sandwiches they crave most. Chick-fil-A was the clear winner, despite being significantly smaller, unit count wise, than much of the pack. So it’s understandable why competition would want to poke the front-runner.

RMS ran another round of data in late April, namely to take stock of McDonald’s entry into the race.

Chick-fil-A maintained its top billing among national brands for craveability, while McDonald’s charted a steady increase from February.

When it came to awareness, the category hype seemed to improve overall awareness of chicken sandwiches. 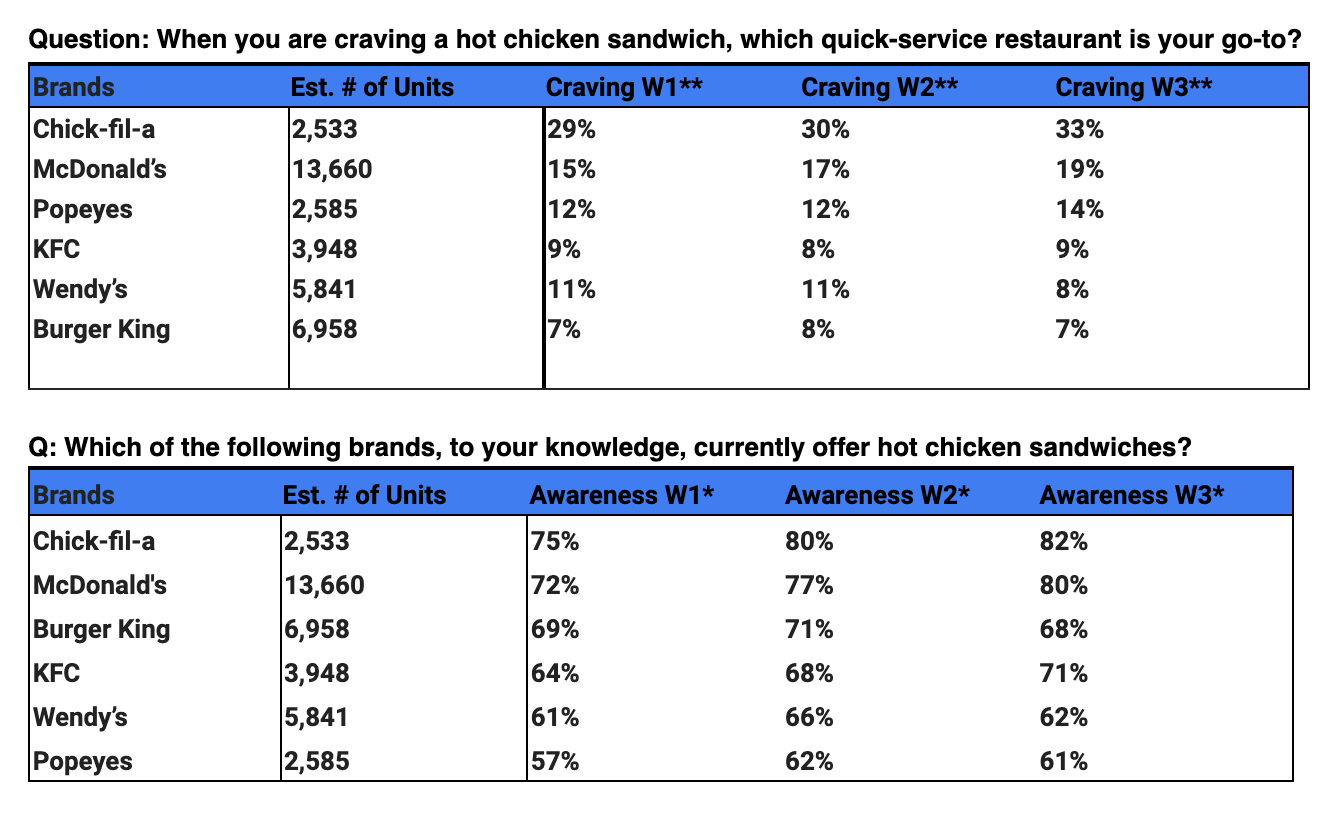 Additionally, between RMS’ first and third surveys, the percentage of frequent users who order food from a quick-service increased, predominantly driven by millennials and Gen Z, a segment that engages widely with their favorite brands on social media. 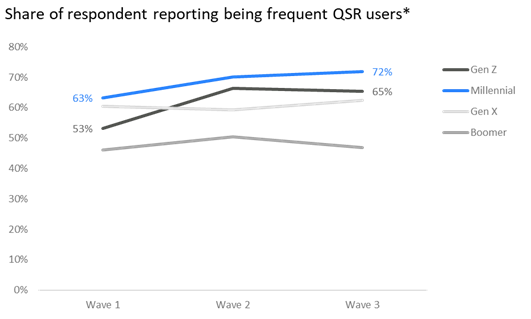 Let’s take this conversation to the present, however. Mobile location analytics platform Placer.ai looked at some recent chicken sandwich results to paint a broader picture, including how the product affected Burger King’s patterns so far.

Firstly, initially surges Popeyes made in August and October 2019 have gone far beyond short-term bumps (as the $400K AUV lift proves). Rather the chain’s chicken sandwich fundamentally shifted the positioning of the brand. In chatter, in culture, at the store level. Even with international potential.

When looking at 2021 monthly visits compared to 2019, Placer.ai recognized impressive growth where you’d expect to see COVID-19-infuenced downturns. Popeyes’ visits for the first five months of 2021 were up over the equivalent months in 2019 by an average of 21.6 percent.

“This massive jump shows that the brand succeeded in turning the initial wave of chicken sandwich driven visits into loyal customers and a wider overall audience,” Placer.ai said.

The growth is translating across the board. Popeyes opened a net of 25 stores in Q1 2021, its best Q1 performance since 2017. That resulted in 4.8 percent growth year-over-year, compared to 1.3 percent at Tim Hortons, and a decline of 0.8 percent at Burger King.

At the same time, four-wall profitability was, on average, at an all-time high, Restaurant Brands International CEO Jose Cil said. Popeyes’ same-store sales increased 1.5 percent in the period, but that stacks 27.7 percent on a two-year basis. And to the aforementioned international note, Popeyes recently announced plans to open more than 1,000 restaurants over 10 years across the U.K., India, Mexico, and Saudi Arabia.

Pulling back, each brand analyzed by Placer.ai (McDonald’s, KFC, Popeyes, Chick-fil-A, Wendy’s, and Burger King) reported their strongest month in April when comparing visits to their 2019 equivalent. This boost, likely driven heavily by a re-opening fueled sense of “first-time demand,” the company noted, was balanced out by a slight step back in May when looking at visits along the same 2019 comparison.

It should climb higher as more states reopen and “normal” shopping patterns return to the consumer picture.

Focusing on Burger King, the brand witnessed a strong recovery pattern for in-store dining in recent months, Placer.ai said. After visits declined more than 25 percent in January and February (compared to 2019), the last three months saw visit gaps of just 11.7, 11.1, and 14.5 percent, respectively.

The momentum has held. Looking at visits week-over-week draws a solid trail of regular growth apart from a two-week strength in mid-April. But the impact of the Ch’King could accelerate progress. Visits during the launch weekend, measuring Thursday through Sunday, were 3.6 percent higher than the prior weekend even though that weekend fell on Memorial Day.

Should the growth rate continue to improve, “it could provide yet another indication of the power of the chicken sandwich in quick-service,” Placer.ai said.

Burger King’s same-store sales lifted 0.7 percent in Q1, or a decline of 3 percent on a two-year basis. Some of the chain’s recent efforts, aside from the sandwich, include the launch of a $1 Your Way Menu the company said helped it close the gap on value and regain sales ground in March.

Burger King also promised to kick its breakfast innovation into gear this year, which currently accounts for about 13 percent of sales. “You'll see a shift at Burger King from trying to do a promotional activation short-term to drive visits and transactions, that high-low approach, I think you'll see us build a sustainable, long-term plan on meaningful platforms," Cil said in April.