The national promotion is changing for the first time in 12 years.

With food costs rising 8–10 percent this year and labor pressures remaining in play, the brand decided it’s time for a divorce—when it comes to the pricing of a longtime value deal, at least.

The national $5.99 Mix and Match promotion, introduced December 2009, will increase to $6.99 for delivery orders to offset the growing costs of those transactions. It will remain $5.99 for carryout orders. As part of the switch, Domino’s is adding 32-piece Parmesan Bread Bites, six-piece boneless wings, and three-piece chocolate lava cake to the list of options.

“We believe $6.99 is still a great relative value for our delivery customers, offering variety, great taste, and a competitive price, while also reflecting the increased costs inherent in a delivery order,” Allison said Tuesday during the chain’s Q4 and 2021 earnings call. “This approach can allow our franchisees to achieve balanced growth across ticket and orders, which is key to driving profitable, long-term growth for their businesses.”

The reason for the change is twofold. For one, the move helps mitigate food and labor headwinds, and two, it nudges customers toward the digital carryout channel, which is Domino’s most profitable transaction.

Online orders are much less labor intensive than phone calls and come with a 25 percent higher average ticket. Additionally, with online transactions, the brand gathers valuable customer information and the ability to leverage engaging, one-to-one marketing.

Domino’s also switched its $7.99 weeklong carryout deal to online only and decreased its boneless wing offering from 10 to eight—all in an effort to cut costs and boost margins.

And to make the online carryout channel even more enticing, the company is giving customers $3 off their next digital order. The chain’s two-minute carside delivery guarantee is yet another way of bringing guests into the digital carryout business.

Because of this push, U.S. carryout same-store sales grew nearly 10 percent in Q4 year-over-year and more than 16 percent on a two-year basis.

The carryout business opportunity is two times that of delivery, says COO and U.S. president Russell Weiner, and that’s because of the disproportionate impact of staffing drivers. Domestic delivery same-store sales declined year-over-year in the fourth quarter.

Domino’s was already facing what it called a “very challenging” labor market in the fall. The rise of COVID variants this winter did it no favors. Allison said Omicron was a “significant shock” to the brand from late December through January, causing numerous employees to call out sick. This lead to reduced operating hours and lower order counts.

U.S. same-store sales climbed just 1 percent in Q4, including a 1.5 percent rise for franchisees and a decline of 7.3 percent for corporate units. Domino’s attributed the difference in performance to company-run stores experiencing substantial staffing issues and implementing more conservative price increases as compared to the franchise base.

On a two-year stack, domestic comps rose 12.2 percent in Q4, but that’s down from the third quarter, when comps increased 15.6 percent on a two-year basis. Allison said the deceleration was caused by waning government stimulus and intensified labor challenges.

“We believe that delivery driver staffing may remain a significant challenge in the near-term,” Allison said. “As the labor market continues to evolve, we are conducting a full assessment of the driver labor market and potential additional actions to relieve the existing constraints on our business. We and our franchisees remain laser-focused on relieving the labor capacity constraints and continuing to grow the Domino's brand as we have for many consecutive years.” 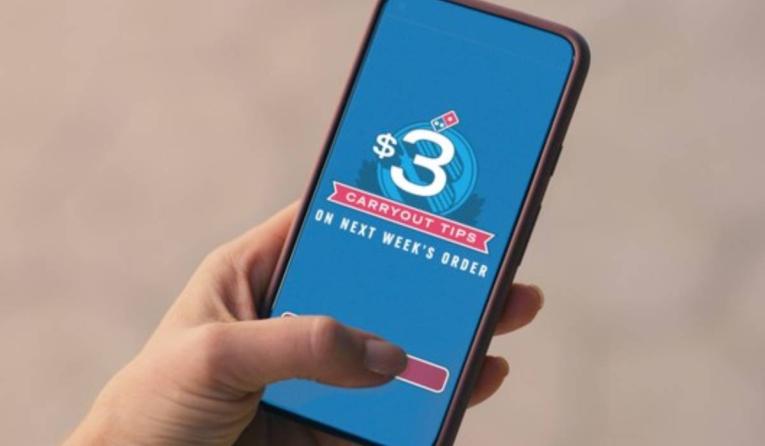 Domino's is offering $3 off customers' next digital order to boost the carryout business.

The top 20 percent of restaurants, which are close to fully staffed, averaged a nearly 6 percent increase in same-store sales in the fourth quarter. In comparison, the bottom 20 percent, which have the worst labor situations, saw comps decline by almost 7 percent.

The gap is alarming, but for Allison, it’s proof that staffing is the main source of sliding sales and that it's not an indictment on brand strength.

“We believe that the sales we saw in Q4 2021 and have seen so far in 2022 for the U.S. business are not indicative of the demand our great brand is capable of generating,” Allison said. “That demand gives us confidence about our ability to drive long-term growth once we adequately address these labor constraints.”

Domino’s is taking several steps to address staffing issues, including a new applicant tracking system that makes it easier for candidates to apply and the elimination of time-consuming tasks, like pre-folding boxes. More than two-thirds of the system is no longer pre-folding boxes, which saves an estimated 30–40 hours of labor per store per week. The end goal is to keep drivers in their car longer, which means more tips and higher wages.

At corporate stores last year, the brand rolled out raises in compensation and benefits totaling more than $6 million above required minimum wage increases. In 2022, Domino’s plans to commit an incremental $8 million.

The current macroeconomic environment meaningfully affected development, as well. The U.S. opened a net of 89 and 205 restaurants in Q4 and 2021, respectively, which was softer than what Domino’s expected. Numerous stores were delayed last year because of slowdowns in permitting, inspections, delivery of equipment, construction, utility hookups, and staffing.

Despite those issues, an important milestone was clinched. Domino’s ended 2021 with 6,560 U.S. stores, surpassing Pizza Hut as the biggest pizza chain in terms of unit count. Pizza Hut ended the year with 6,548 stores.

While domestic business is pressured, the international segment continues to soar. Markets outside the U.S. saw same-store sales rise 1.8 percent in Q4, good for the 112th straight quarter of positive growth. On a two-year basis, comps lifted 9.1 percent in the quarter. For 2021, same-store sales increased 8 percent, or 12.4 percent on a two-year stack. International markets opened a net of 379 stores in Q4 and 999 in 2021.

Overall, Domino’s opened a net of 1,204 restaurants last year, which equates to more than three store openings per day on average. The chain ended 2021 with 18,848 units across the world, or growth of 6.8 percent year-over-year. This aligns with Domino’s two to three-year outlook of 6-8 percent annual unit expansion.

“With an estimated remaining potential of over 10,000 new stores in our top 15 international markets alone, we look forward to continuing to work with them to drive long-term global growth for Domino’s,” Allison said.

The chain’s digital channels represented $6.6 billion of U.S. retail sales, an increase of more than 36 percent since 2019. Domino’s also surpassed 29 million active members in its loyalty program, and has almost 70 million enrolled in its database.