The chain just turned in a red-hot quarter to start the fiscal year.
Fast Food | May 2019 | Danny Klein

Dunkin’ says it’s the brand that could “democratize espresso.” If anybody didn’t take that proclamation seriously before, now might be the time to start.

The chain kicked off fiscal 2019 with a Wall Street-busting quarter, posting 5.5 percent U.S systemwide sales growth and same-store sales of 2.4 percent—its largest quarterly increase in four years. Adjusted earnings per share of 67 cents beat analyst forecasts of 62 cents. Revenue of $319.1 million, up from $301.3 million in the year-ago period, topped calls of $313 million.

Hoffmann said the espresso category has grown 30 percent since last year’s relaunch. To refresh, Dunkin’ introduced a $100 million plan to grow its U.S. business in 2018. Sixty-five percent of which was dedicated to Dunkin’s “on-the-go beverage-led strategy.” While not broken out by investment, a very substantial figure was attached to the equipment rollout of new espresso machines systemwide. Dunkin’s improved espresso hit stores nationwide November 19 and was then supported by six straight weeks of promotions.

Dunkin’s goal was always to provide a high-quality, improved product, but also to deliver it quickly and affordably in a way local cafes and other competitors couldn’t. Use its scale and history of convenience-driven operations to differentiate from the java pack. Has that happened? Hoffmann said the impact, both in store and in the drive thru, in regards to speed of service, has been negligible. Dunkin’ has maintained its operational strength, he said. 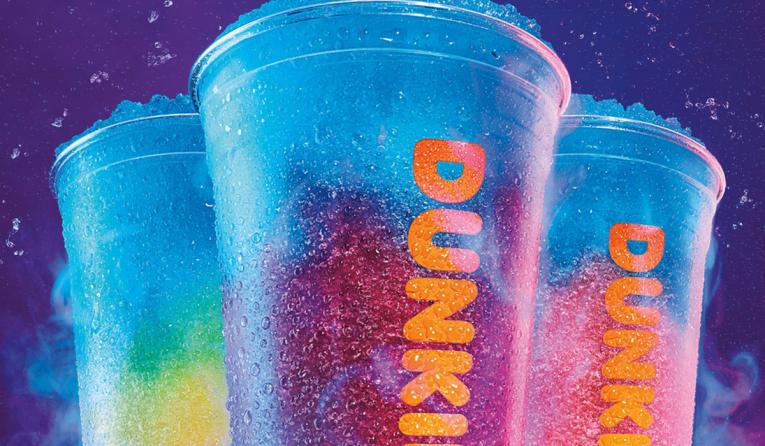 Graduating from Coolattas to lattes. Is espresso the gateway to coffee for today's generation of consumers?

High-quality espresso beverages sold at a fair price and served at the speed of Dunkin' is something only we can do,” Hoffmann said.

Heading into the summer, Dunkin’ is doubling down on training. It’s also promoting new espresso innovation, like the recently launched signature latte line, which includes a Blueberry Crisp flavor.

And expect Dunkin’ to keep driving afternoon business and trial with its PM Break platform that touts $2 offers across its beverage lineup. Hoffmann said the platform hasn’t just ignited p.m. business, which posted positive sales comps for the fourth consecutive quarter in Q1, but has also introduced many customers to espresso. Lapsed, new, and loyal. These value seekers have shown a tendency to return in the morning as well.

Espresso has also been key for Dunkin’ because it skews younger than typical hot-drip coffee and opens the brand to a new segment—one that perhaps was just interested in iced options before. Hoffmann said at the brand’s November media day in 2018 that his kids were “graduating from Coolattas to lattes.” It’s comparable to the transitional role drip coffee once played for soda-drinking consumers as they matured. Call espresso the gateway coffee choice for millennials and Gen Zers.

Another important element is the drive thru. Chief operating officer Scott Murphy said Dunkin’ was able to maintain its speeds there despite the added complexity. It’s balancing equipment and preparation changes with renewed training and other operational moves, like significant menu simplification taken last year, the installation of label printers, and better app features. “And we’ve got plans to see, hopefully, some even bigger improvements throughout the next year,” he said.

“We pay very careful attention to social media,” he said, “where conversations are increasing substantially and considerably more positive, particularly around the espresso lineup. A lot of delight among consumers around what we’ve offered and the fact that we are in that game.”

Dunkin’ brought it back in January with a revised menu that showcased three of its most-popular breakfast items, including two bagels for $4. While the platform delivered strong incremental sales and traffic, and helped with afternoon business, another figure stood out: About 75 percent of Go2 transactions contained a beverage and had an average ticket north of $8. That’s a pretty solid figure for a value platform focused on snacking.

Weisman added that Dunkin’ spiked interest awareness in the quarter with a retro-themed advertising campaign.

“The consumer has more choices in the marketplace than they ever had before. It's highly competitive. It's still a fight for share in the marketplace. Again, I think we're competing better than we ever have before." — Dave Hoffmann, Dunkin' CEO.

And all of these convenience-driven changes slide into a digital ecosystem that’s improved ever since Dunkin’ secured a perpetual license last year to the code that runs its mobile app. Doing so opened the door for flexibility and allowed Dunkin’ to get to market quicker with some of its digital initiatives.

On-the-go ordering saw average weekly sales increase by 25 percent, year-over-year, in Q1. It made up 4 percent of total transactions. At locations without a drive thru, the number bumped to 7 percent.

At some high-volume sites in many urban areas, Hoffmann said, mobile orders exceeded 25 percent of transitions in Q1. Nearly half of Dunkin’s 10 million DD Perks members are using mobile ordering, he added.

Of the company’s recent 1,000-store multi-tender test, which allows guests to earn rewards regardless of how they pay, Hoffmann said, they believe it’s a “true unlock” to grow the loyalty program beyond 12 percent of sales as it stands today. Dunkin’ is also testing delivery via Grubhub, with plans to expand “across a few U.S. markets.” 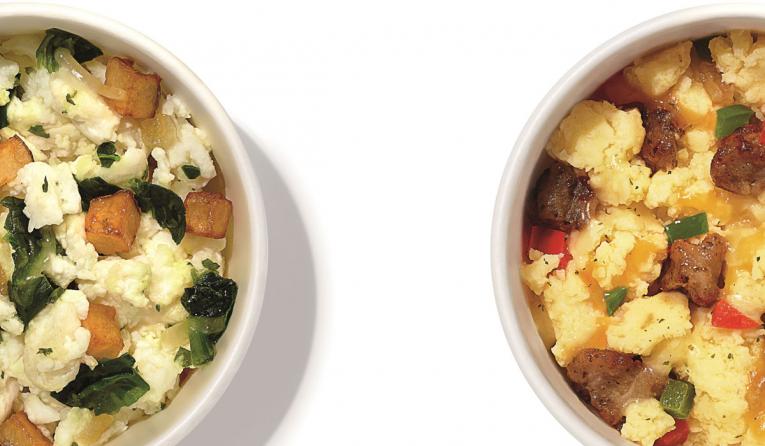 Dunkin's new breakfast bowls are a step into the better-for-you category.

Dunkin’ is tracking on the low end of its previously forecasted 200–250 domestic growth for the year. Franchisees added 34 net new units in Q1, and have now debuted roughly 200 NextGen designs. The vast majority of openings going forward will fall into the remodeled package, known for its tap handles and digital connections, Hoffmann said.

Murphy added that Dunkin’ worked closely with operators on specifics, everything from where to put equipment to behind-the-counter changes. “The collaboration that I think we have with [franchisees] is almost unprecedented in the industry,” he said. “But I think it helps make us better.”

Dunkin’ doesn’t share exact traffic figures but did say its comps were driven by an increase in average ticket partially offset by a decrease in traffic.

Weisman said Dunkin’ has seen a consistent lift across early and afternoon dayparts and is “pleased directionally with where traffic is going.”

Getting into positive territory comes down to consistent messaging. “We know value is important to consumers, so look for that going forward, and we feel optimistic about where the trends are heading.”

Hoffmann said the segment is simply more crowded than ever. “The consumer has more choices in the marketplace than they ever had before. It's highly competitive. It's still a fight for share in the marketplace. Again, I think we're competing better than we ever have before,” he said. “… in terms of what we saw around traffic, it is better than what we've had in several years. So it's a good story, but nobody is waiving the victory flag on it until we get that back to positive.