Dunkin's Digital Investments are Starting to Pay Off

When Stephanie Meltzer-Paul joined Dunkin’ about a year and half ago, she noticed roadblocks in the brand’s loyalty program. Essentially, the company was constricting the top of its funnel and creating barriers to entry and usage. In today’s digital space, especially among breakfast and coffee quick-serves—where Dunkin’s top competitor boasts close to 18 million rewards members—the issue was an urgent one.

Dunkin’ has made no shortage of investments over the past year, with espresso and its $100 million beverage-led transformation grabbing most of the headlines. But the brand has also spent heavy resources on bolstering digital assets, and the results really just started to materialize in September. Meltzer-Paul, Dunkin’s VP of digital and loyalty marketing, spearheaded two key changes: multi-tender payment for DD Perks members (where they can now earn rewards no matter how they pay, including cash, credit, debit or the previously used enrolled Dunkin’ card), and guest ordering for Mobile On-The-Go. Now, customers who aren’t Perks members also have access to mobile ordering through Dunkin’s app.

The mobile ordering feature, though, produced some more intriguing figures. Dunkin’ processed north of 18 million On-the-Go Mobile orders in Q3, which is a healthy 25 percent increase versus the prior year.

“There is tremendous runway ahead of us when it comes to growing our digital platform,” Hoffmann said.

Currently, Dunkin’ mixes about 4 percent of its total orders through mobile, up from 3 percent in 2018. And that comes with an 80 percent retrial rate, the company said. Meaning there’s plenty of whitespace left, as Hoffmann said, to match Dunkin’s core equity (speed and convenience) with technology that better serves the target.

For instance, while still in early stages, Dunkin’s guest ordering feature on its app is seeing roughly 25 percent of checkouts convert to Perks members within the first few days, Meltzer-Paul said.

Dunkin’ opened that funnel but made sure it came with incentives to inspires users to take the leap. The chain promotes Perks benefits within its mobile app after the guest’s order and then follows up with direct email marketing. “This is the goal for guest ordering—to give them the option to join Perks or not,” she said. “But, ultimately, we do want to get them over to our Perks program for an even bigger unlock.” 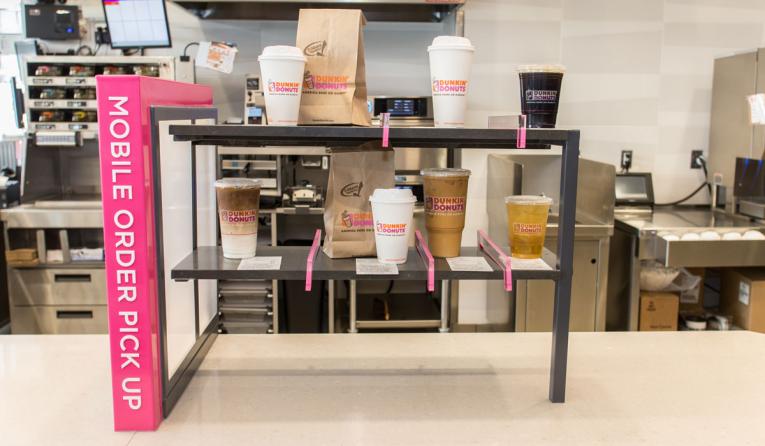 Dunkin's NextGen stores are built with

For a peak into the future, Dunkin’s NextGen restaurants are built around the digital-ordering boom, and the results reflect that. Hoffmann said there are some markets where it balloons from the 4 percent average to 20–25 percent. Dunkin’ sees better throughput thanks to that shift, too.

Its NextGen remodel program cleared the 400-store bar in mid-October. Dunkin’ is on pace to have 500 opened by year’s end between new builds and remodels. The restaurant, in addition to an eight-headed tap system, modern décor package, front-counter bakery, and more efficient coffee line, also features an enhanced pickup area that has helped lift mobile orders, Hoffmann said.

Not surprisingly, the whole package is returning better customer satisfaction scores. Part of that is what’s new and fresh to Dunkin’, but the other is how NextGen stores accentuate brand differentiators in ways old ones didn’t.

The tap system, for instance, reinforces Dunkin’ industry-fronting cold-beverage platform. Everything else nods to speed of service and convenience—where the chain tries to run away from the coffee pack.

Scott Murphy, Dunkin’s chief operating officer, said a rise in mobile orders creates a convenience trickle-down effect of sorts. It takes the business and moves it outside the restaurant—the ordering, payment, all happens on a customer’s time when they’re not actually in-store. “Which is just the most efficient and accurate and high-quality transaction for our restaurants,” he said.

Hoffmann added Dunkin’ is building these restaurants with digital in mind now, not trying to retrofit the trend. “… Continue to work on this,” he said in reference to NextGen units, “but not designing a mobile order and pay [setup] that’s 5 percent, but that’s significantly greater—three, four times that, which is where we think the trends will go in the future. Not just for us but for the industry as a whole.” 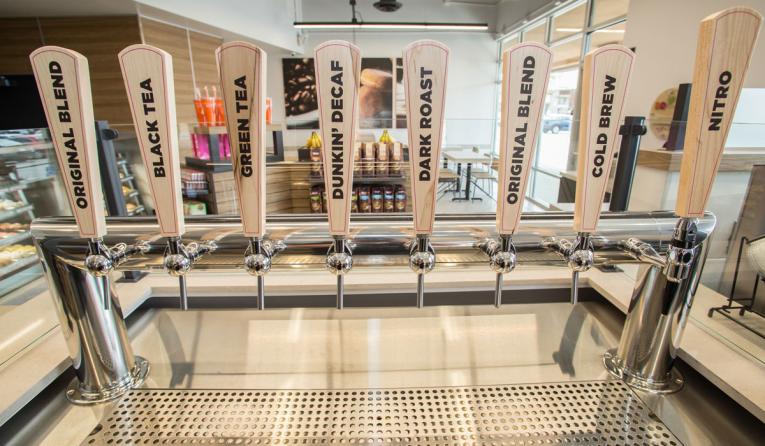 Hoffmann said the chain’s performance in Q3 was driven by premium beverages, such as espresso and cold brew, as well as its national value platform, Go2s.

Espresso sales, which relaunched about 12 months ago, hiked more than 40 percent, year-over-year, thanks in part to innovation in Dunkin’s Signature Lattes line.

Hoffmann highlighted a key learning from the past year that troubled investors in the early days: Would espresso slow down operations?

Murphy said “small tactical things” have aided the improvement, including high-definition audio, digital headsets, car counters, and the queue and positioning of its menuboard. Also, the menu simplification efforts installed over the past couple of years.

Mainly, though, Hoffman said, quality improvements are driving the results. “We are a beverage-led brand, and espresso is a big part of our future. However, we will also fight hard to protect our leadership in drip coffee, both hot and iced, which has experienced increasing competition in recent years,” he said. Dunkin’ sold more than 5 billion cups of coffee last year across its 9,500-plus restaurants.

“Everyone wants to get into our space. We've always come out strong. So, one new competitor won't change that." — Dunkin' CEO Dave Hoffmann on new breakfast competition.

In regards to the Go2s, Hoffmann said they’re driving beverage attachment, which was the hopeful goal. Close to 75 percent of Go2s transactions also include a full-priced beverage with an average total ticket of about $9, he said.

In November, Dunkin’ plans to launch plant-based breakfast sausage sandwiches with Beyond Meat. Hoffmann sees it as a prime chance to accelerate a movement. “I believe Dunkin' is a brand that can democratize trends,” Hoffmann said. “We did it with espresso, and we believe there is an opportunity to do more when it comes to giving consumers great-tasting, on-trend innovation like plant-based proteins at an affordable price. This is exactly how we want to use our platform.”

Hoffmann was also asked what he thought about “one of the big burger players getting into the breakfast daypart,” and what the implications might be (almost surely referencing Wendy’s here).

“Every day, we fight a battle on all fronts,” Hoffmann said. “Everyone wants to get into our space. We've always come out strong. So, one new competitor won't change that. I think it's all the more reason why we're very maniacally focused on what we do best, which is great coffee fast. We're doubling down on quality value, exciting new menu innovation, and that's a big part of the focus going forward. But one new competitor doesn't change that, and we'll keep doing what we do best.”

21 Main Street, Suite 204
Hackensack
NJ
203-883-6060
SH Franchise Finance is an independent finance company, so we know what it is like (more)
Technology Support