Get a Glimpse of Sonic Drive-In's New Restaurant Design

Some franchisees are already remodeling to the look.

Inspire Brands has turned up the innovation at Sonic Drive-In over recent months. In late February, it introduced a new advertising campaign and brand identity for the 3,500-unit chain, which Inspire acquired for $2.3 billion in fall 2018.

Called “This is How We Sonic,” it shifted away from the “2 Guys” focus to spotlight real families throughout a typical day (the “2 Guys” aren’t going away for good, however). The new spots centered on spontaneous drive-thru moments, with a nod to menu items. Sonic launched limited-edition swag boxes, too, and a Reese’s Overload Waffle Cone.

Sonic changed ad agencies in 2019 from Goodby Silverstein & Partners to Mother. It worked with the first for eight years.

But arguably the most tangible change was unveiled Tuesday. At least the most visual.

Inspire shared a look at Sonic’s new restaurant design, “Delight.” Sonic tapped agency ChangeUp to help create the brand look and fresh prototype, something "that winks at the brand’s equity and creates new space for Sonic to become a little oasis in your daily routine," ChangeUp said on its website.

“Over the past few months, Sonic has delighted millions of Americans, and we’re excited to visually bring that feeling to life with our new drive-in design,” said Claudia San Pedro, brand president, in a statement. “Whether our guests are trying the latest craveable innovation in our drive-in stalls, sharing some Tots with friends on our patio, or getting their Sonic fix at the drive-thru, we want to create an atmosphere that sparks moments of delightful possibility.”

"There’s an incredible amount of parody in the [quick-service restaurant] industry,” said Ryan Brazelton, executive creative director at ChangeUp, in an email to QSR. “No part of this design is a copycat, from the patio options to drive-in docks and the optimized drive-thru to the kitchen unit. Every element of the design is unique to Sonic.” 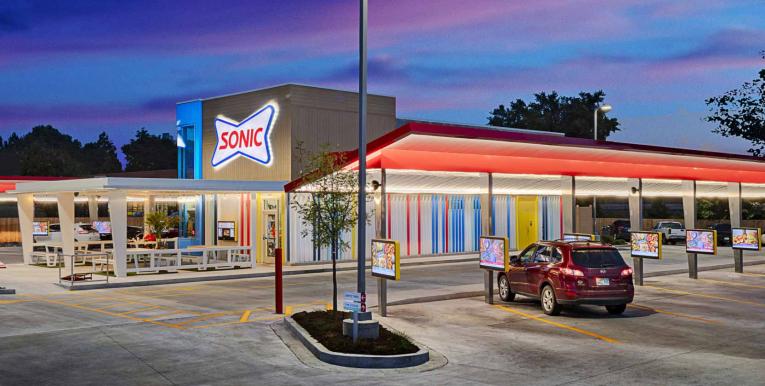 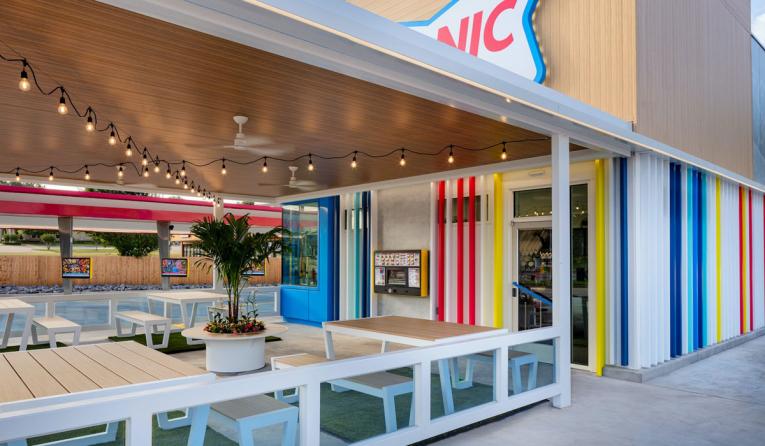 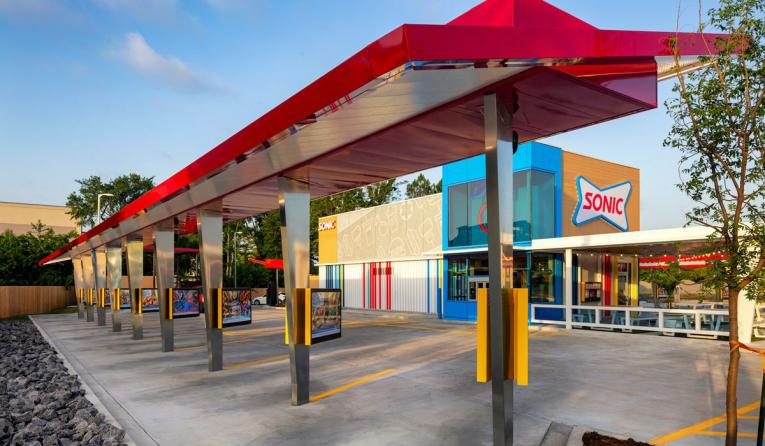 Another restaurant with the design is expected to open in July.

The restaurant is located in Tahlequah, Oklahoma, and features 18 docks, a drive-thru, and a covered outdoor patio where guests can dine under string lights and enjoy lawn games. The layout has fewer and wider car docks than normal that don’t cross over the drive-thru lane.

The patio signals “a treat for your day,” and is a newer element for most Sonic locations. There are now three to four different layout options to plug in depending on what’s right for the franchisee, Brazelton said.

The exterior reflects Sonic’s updated brand identify, the company noted. It pops with red, blue, and a bit of yellow, intended to remind “guests that summertime is a feeling, not just a season,” Sonic said. With the lenticular stripe detail, the building itself moves with you as it changes colors as you drive around the building, Brazelton said,

It also features a blue glass tower with a brightly lit cherry atop to pay homage to the 9-million-plus Cherry Limeades served each year. Brazelton said the feature stands out at night and allows "for a look inside the building to get a peek at the kitchen’s hustle and bustle."

Inside, Sonic built a new kitchen layout that enables teams to operate more efficiently, it said. (The company’s original slogan is “service at the speed of sound).

Sonic didn’t provide further details on what the kitchen change entails. It did note, however, the updated design translates to previous formats and footprints. Already, the company said, “several franchisees” are building or remodeling locations to the new look.

The second is under construction in Fort Worth, Texas, and expected to open this month.

"A modern visual system might be the secret sauce," Brazelton explained. "The bold new logo has a charm and quirkiness that’s all its own and a punched-up color palette, food and lifestyle photography, iconography, app design, and collateral such as the classic roller skates that carhops are permitted to wear."

How Sweet Chick Evolved into a Growth-Ready Fast Casual
A New, Transformational Era Begins at BurgerFi
Is a Recession Coming for Restaurants?