How Church’s Protected Brand Standards During a Pandemic

The chicken brand is conducting remote visits, and getting more efficient than ever.

Church's Chicken has put its people first from the start of COVID-19.

In early summer, Church’s Chicken CEO Joe Christina issued a challenge to his ops team. COVID-19 stretched long enough for the brand to recognize no let-up was in sight. And so Christina began thinking about one of his lead mantras since succeeding Jim Hyatt to Church’s top spot in fall 2016: This notion of becoming a “global franchisor of choice.”

Part of that directive always centered on direct support, from corporate to operator to coach and everything along the path. But one thing COVID did was strip one of the most fundamental aspects of running a multi-unit franchise—actually visiting restaurants.

In the past, Church’s regional management and field teams would spend five-plus hours in-store to conduct an “Operational Excellence Review.” Naturally, the pandemic halted that as travel budgets evaporated (since March for the brand) and Church’s executives did everything they could to limit face-to-face contact.

“His question was, ‘how do you think we can measure what’s going on in the restaurants and still provide our restaurant managers with support,” says Brendan Berg, SVP of global operations at the 1,500-unit brand. “Because Joe is really passionate about the level of coaching and direction we provide for our restaurant managers. What could we do?”

Just as most tasks and social behavior turned virtual of late, that’s where Church’s started. It had a proprietary app already in place called the RVT, or restaurant visitation tool. Imagine a mobile app where all of Church’s above-restaurant leaders and field teams can log in and conduct a restaurant visit at any time.

The end result was a “Remote OER,” which Church’s developed in 60 days. This required transformation across the board, with the five-plus hour practice getting whittled down to less than 90 minutes. Today’s enhanced evaluation of a store’s operation provides Church’s franchisees a detailed action place with specific recommendations. And because of the shortened time, Church’s can conduct more visits, more frequently (a key during COVID protocol checkups that don’t take a day off and seemingly shift by the hour).

When the Crisis Hit, Church’s Chicken Put its People First

Church’s Chicken on the Power of Putting People First

Church’s worked with its vendor, Nextx, to develop app enhancements to the RVT platform to allow leaders—“OPS Excellence Coaches,” as Church’s calls them—to provide real-time reinforcement and redirection to managers and above-restaurant employees.

While the technology is complex in some ways, the aim is not. It’s almost like FaceTiming a restaurant and having them walk you through different checkpoints. The tech links Church’s field teams to not only the restaurant manager and market leader in the restaurant, but as many additional parties as Church’s wants to join, like a director of operations or the franchisee. Essentially, it’s a market leader inside the restaurant walking through with a mobile device. A Church’s director of ops, etc., joins in virtually and the final component is the field representative guiding the process from their home office.

Church’s said this allows everyone along the ladder to see what’s happening in the trenches, calibrate on any current business needs, and collaboratively develop a “Go Forward Action Plan.”

Given the constantly evolving battle of running a restaurant during COVID, the Remote OER Continuous Improvement Plan is housed inside a dedicated tablet called the “OPS 360.” It supports daily restaurant routines and allows both sides to easily access information. Managers and employees can open brand-approved reporting websites, job aids, videos, and submit photos and comments when action items from the remote OER visit have been completed. For instance, if the 90-minute visit put a high-priority on handwashing, progress can be continuously recorded and tracked. It’s real-time intel.

Getting visits to 90 minutes boiled down to a targeted approach. Berg says there are standard visits, which are about an hour and guide through all aspects of the restaurant, from outside cleanliness to landscaping. When the process finishes, it gets incorporated into a PDF that’s emailed out to the restaurant and everybody involved—franchisees, market leader, field teams, and so forth. 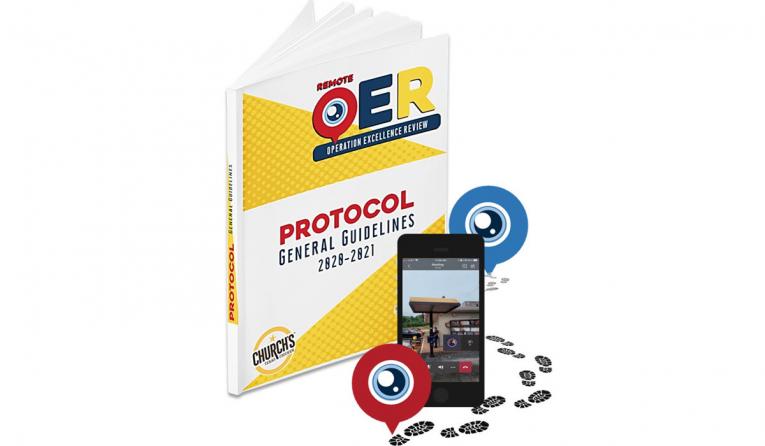 Church's wants to ensure consistency across all of its operations.

There are different visit types in the RVT app. There’s a specific check-in with LTO launches, for example. There’s one for food safety. Another for speed of service.

Church’s beta-test for the Remote OER application completed in September and rolled to the domestic system by mid-October. It reached all international markets the following month. That latter point is important because it’s enabled Church’s leaders to check in on franchisees without hopping on long plane flights.

There are benefits to the remote OER beyond social distancing. Berg says it’s unlocked the ability for Church’s to gently steer market leaders through visits; what they should inspect, measure, coach, look for in every restaurant. While it can’t (and won’t) replace in-store visits down the line, there’s more transparency, in some ways, throughout the organization with these since executives can join from wherever.

“We are driving engagement of our market leaders and tapping into them and making sure that they’re feeling good about what they’re doing,” Berg says.

In shorter visits, Church’s can’t look at every facet as it might before, but the reality is it doesn’t need to. It can return a lot easier, so there’s less pressure to knock every aspect out at once. “We’re really focused on those that are hot right now,” Berg says. “COVID-19, health and safety, [recently launched] chicken sandwich, and we’re looking at that in a close way”

So far, Berg adds, Church’s has observed stronger engagement. Market leaders and coaches used to only get one, maybe two of these in a typical workshift. Now, in some cases, they’re conducing four visits. Even five. “They’re getting multiple touch points completed in a day,” Berg says.

The action plan element has been one of the biggest adds. In the past, when Church’s had lackluster or inconsistent performance, Berg says, it stemmed from store-level operations getting overwhelmed or unfocused, and not seeing a clear path forward. It doesn’t get much more streamlined than the digital version available today. The remote OER action plan is completed electronically. Berg says Church’s enjoyed high completion rates thus far—more than 95 percent of restaurants are submitting action plan progress.

Church’s presents a “forever action plan,” in some cases, which offers long-term, systemic fixes. In other terms, improvements that can be made methodically over time. Then there’s a “fix-it-now” plan that ranks imminent needs and puts a 24–48-hour timeline in place.

Based on the grade of the visit, Church’s will chart its follow-up. A great score could stretch the next digital drop-in to a month. Something lower will likely trigger a call in a week or two.

“And that’s more of a lifeline to that restaurant to say, hey, looks like you’re challenged and you need a little bit more help,” Berg says. “Maybe it’s lower turnover. Who knows what the reason might be. But that level of support, I know our franchisees are really finding beneficial. And I believe the restaurants team is as well.”

The remote OER gives market leaders a chance to view restaurant’s performance in a fresh way, in a moment in time. The goal being to guide restaurants back to what they should be doing on a daily basis and take stock of what’s impacting the guest experience.

“So the remote OER not only helps with what’s happening with COVID-19 health and safety, but also the things that are core to our brand,” he adds. This encompasses everything from delivering honey butter biscuits in the proper way to uniform appearance to speed of service and friendliness. The remote OER and its potential frequency pushes people toward daily focus, Berg says.

The OPS 360 tablet, in particular, has streamlined efforts. It’s taken Church’s paper management planner, what it calls “the manager planner,” or tables and checklists and waste logs, etc., and digitized them. Now, there’s a one-stop shop checklist in every restaurant.

The OPS 360 creates a routine for managers throughout a day. It will tell them, at specific times, which tasks should get completed. Say at 8 a.m. when the manager walks in the door, they’ll turn on the equipment and see it’s time to start prep, and so on. At 9, it prompts cleaning tasks, stocking. By the time guests walk in, OPS 360 has directed a manager through the entire process, as corporate laid out to ensure consistency across all 1,500 units.

“It really organizes the day of the manager to open what they should be doing at the right time. It’s great for the managers,” Berg says. “Church’s really providing them a roadmap to success.”

It all blends. From the remote OER action-plan items (fix it forever and fix it now), Church’s can go in and actually create an item in the OPS 360 routines for managers.

Going back to the handwashing example—now, the tablet will ask the manager to, for instance, take a video of a team member washing their hands and to do so for the next two weeks.

The market leader and RGM agreed to the plan. It’s then embedded right inside the OPS 360 routine system. What this does is take a playbook and bring it to life.

These systems won’t replace the in-person visit, however. Church’s hopes to start going back to restaurants in 2021. When exactly, though, Berg isn’t sure. Yet when Church’s does so, it’s going to implement a hybrid approach. What this might look like is a live visit, perhaps four or five hours, then the remote OER will come in a couple of weeks afterward for a check-in. For high-performing units, executives might not need to return for a whole year. They can just keep using remote OERs to track progress.

“I’m excited about bringing the remote OER as a strong visit type in our portfolio of visits and I think it’ll be more effective,” he adds. “We’ll be able to follow up much quicker, much easier, and I think we’ll have stronger execution and ultimately better results and higher performance of our restaurant teams.”