How Domino's Plans to Compete Against its 2020 Boom

Franchisees are coming off a year of record-setting profitability.

Restaurants industrywide are lapping an intense time of year.

For many, March and April 2020 came with plummeting sales and a scramble to pivot operations. Domino’s was not a part of that crowd—not by a long shot. From April 20 to May 17 last year, same-store sales lifted 20.9 percent at U.S. franchises and 22 percent at company-owned stores. In the same period, domestic retail sales increased 25 percent.

It was a stellar run for Domino’s amid all the challenges. But now the calendar has flipped forward a year, and the environment is completely different. Capacity restrictions are lifting, vaccines are increasing, and COVID rates are declining, for the most part. There’s a lot more options for consumers out there, which means Domino’s market share comes into question.

CEO Ritch Allison is wary about the upcoming laps, but not worried, and that’s an important distinction, he said. Allison feels Domino’s is in as good of a position as it's ever been. U.S. same-store sales increased 13.4 percent in Q1, the market's 40th consecutive quarter of growth. With a two-year stack of 15 percent, Domino’s saw a slight sequential improvement on a two-year basis compared to Q4 2020. The lift in comps was driven by a healthy mix of average check and order growth.

The brand opened a net of 36 U.S. stores, including just one company-owned closure. Most importantly, franchisees are coming off another year of record-setting profitability, with average store-level EBITDA coming in at just over $177,000.

“We've got some pretty strong laps ahead of us from the second and the third quarters of last year, but what we're really focused on are continuing to make the investments to drive long-term growth in the business,” Allison said during the chain’s Q1 earnings call. “And as I look out across the rest of the year, we are really in an enviable position.”

Domino's is in an enviable position because it has plenty of "arrows in the quiver" to fuel business, Allison said. For example, there is much room to gain in the carryout business, which saw growth in sales throughout 2020, but a weakening order volume. There’s reasons for this trend, too. Domino’s began 2020 running TV advertisements for Pie Pass, a big screen that displays customers' names as they pick up their pizza. That had to be turned off immediately when COVID hit.

Through the remainder of the year, Domino’s developed carside delivery as a safer service model, but it still wasn’t pushing carryout as hard as it had been in the past few years. Domino’s turned off its more aggressive promotional weeks that are usually spread across the annual calendar. Even in Q1 the pizza chain elected not to run any "boost week" promotions because of the positive sales impact from stimulus checks. Domino’s also doesn’t discount the affect of other restaurants dedicating more resources to the carryout channel throughout the pandemic. 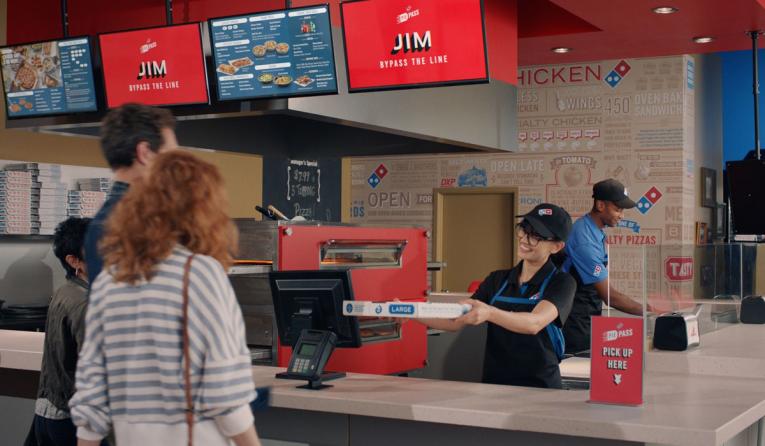 “As I look this year and ongoing, fortressing is going to continue to be a big part of that strategy to gain share,” Allison said. “As we've talked about in the past, we are still relatively underpenetrated in terms of share in the carryout business specifically. And fortressing gives us an opportunity to go out and grab that largely incremental carryout business.”

The foundation is already there. Domino’s has 27 million active members in its loyalty program, and the figure continues to grow. The company sees strong and steady frequency among these guests, as well. Going forward, Allison said there will be opportunities to “turn the volume back up” on new customers.

Domino’s arsenal includes an advertising war chest to drive customer awareness and acquisition. It allows Domino's to gather sales trends and “put a little bit more muscle against things" when and where it needs to. A good example of this came earlier this week. Domino’s announced a national TV campaign highlighting its relationship with Nuro, a robotic delivery company. As part of the advertisements, Domino’s brought back “The Noid,” a character the chain first used in the 1980s. Allison said the campaign is already “generating incredible buzz around the Domino’s brand.”

“It's stuff that we think about all the time because the vast majority of the dollars in that advertising fund are franchisees dollars,” Allison said. “So we spend it with great care. We talk a lot about how we use analytics to make decisions at Domino's. It's an area where we've got terrific analytics in terms of understanding the return on spending those dollars across a range of different channels or opportunities that we have to invest them on the part of our system. And so, we are constantly looking at that and managing the dials to use that investment for the greatest return for our system.”

The marketing and advertising efforts will include carside carryout, which is a “critical weapon” in cranking up awareness toward the carryout business, Allison noted.

“We brought that forward to address the safety concerns that customers had around picking up their food in a COVID environment,” Allison said. “But over the long-term, that's really a great tool for us as we compete for carryout business against the drive-thru lanes of other [quick-service restaurant] concepts.” 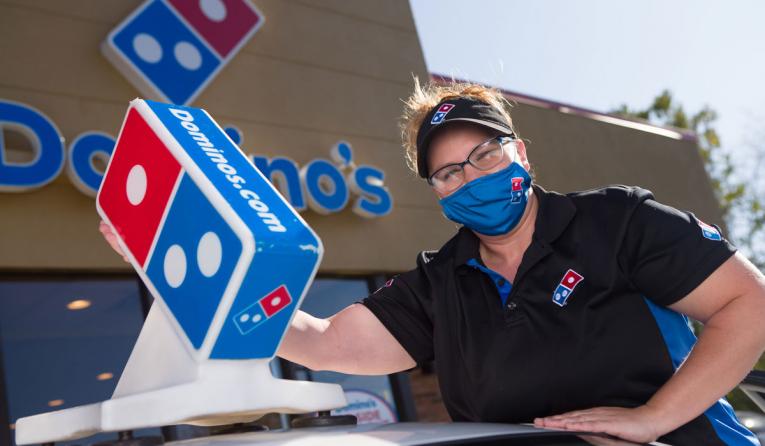 Domino's said fortressing is one key to combatting the pressured labor market.

As Domino’s ignites its carryout business, it will be doing so in a pressure-filled labor market. Just this week, the pizza chain announced that franchise-owned stores in Florida are looking to hire roughly 4,000 workers across more than 400 stores.

When it comes to labor pressures affecting the supply chain, CFO Stu Levy said Domino’s keeps franchisees from carrying that burden. The company is absorbing a piece of that labor increase versus passing it through, and it does the same with food inflation. At the store level, Levy noted that restaurants are challenged in many areas, but Domino’s will never use it as an excuse to slack on service.

Similar to the carryout business, fortressing will be the "arrow" used to mitigate future labor issues. So will technological investments that drive throughput and reduce the need for manpower.

“A good bit of the work that we're trying to do around tech and around the store operating model is basically to keep drivers moving 100 percent of the time, with the long-term goal that they never get out of their cars or delivering pizzas constantly as opposed to other tasks and other activities that they had to perform in the old operating environment,” Allison said.

Allison said one factor that separates Domino’s from the crowd in terms of incentive is that being a driver or a pizza maker is a legitimate stepping stone toward becoming an entrepreneur. Domino’s has the stats to prove it—more than 90 percent of franchisees started as employees.

Will the job market prevent franchisees from opening stores? Allison doesn’t think so. In 2020, Domino’s opened a net of 624 stores. And when you look back at the trailing four quarters, its 730 net new openings. So the pace is accelerating. The unit economics are more than solid, and the demand for franchisee investment hasn’t faltered in the least, according to the CEO.

“[Staffing’s] always a challenge, but one that we and our franchisees feel comfortable that we can manage over time,” Allison said. “Part of the beauty, particularly as it relates to the opening of these new stores, is that the majority of these are opening as part of our fortressing program and giving us an opportunity to do two things. One is to shrink the territory, so we get more deliveries per hour of delivery driver labor, but also you get that incremental carryout business, which is a much less labor-intensive business for our stores, which is one of the reasons we want to continue to grow and build that business.”

Total revenues increased from $873.1 million to $983.7 million year-over-year. The growth was primarily due to U.S. and international same-store sales growth and increases in global store counts during the trailing four quarters.