The brand expects food costs to rise at 3-4 times the normal level.

The chain expects food costs to rise 8–10 percent in 2022—including meats, cheese, grains, and other ingredients required to make a pizza. That’s three to four times the increase seen in a typical year. Higher wage costs are expected to continue, as well.

To mitigate those pressures, Domino’s will make its $7.99 weeklong carryout deal online only, shifting the national promotion to more profitable digital channels that offer greater average ticket, consumer data, and fewer costs since workers don’t have to answer the phone. A majority of Domino’s customers already use these methods; the chain has more than 29 million loyalty users and north of 75 percent of U.S. sales flow via digital channels.

The pizza chain will also start offering eight wings as part of the carryout deal, instead of the usual 10 pieces.

Allison said in October Domino’s was continuing to test price points of value offers like its $5.99 “mix and match” and $7.99 carryout deals in order to find the range that fuels profit for franchisees.

“While we are wedded to value, we are not specifically wedded to any individual price points,” the CEO told analysts during the chain’s Q3 earnings call. “And if a better price point yields better long-term profitable growth for our franchisees, that's where we're going to go.”

The news comes about a week after Little Caesars announced it's raising the price of its Hot-N-Ready pizza from $5 to $5.55. The chain characterized it as “new and improved” pizza with 33 percent more pepperoni and the same ingredients.

The updated recipe is a permanent change, but the price is “for a limited time.”

"Change is good when it comes to giving our customers more of what they love," Little Caesars CMO Jeff Klein said in a statement. “And we're changing our iconic HOT-N-READY Classic, adding 33 percent more savory, meaty pepperoni still at the country's most affordable price."

As for Domino’s, domestic same-store sales in Q3 fell 1.9 percent, ending a streak of 41 consecutive quarters of positive comps. The decrease was driven by lower order counts, which were affected by a “very challenging” staffing environment that shortened operating hours and caused issues with customer service. To address this issue, the company rolled out a new applicant tracking system to ease the hiring process and corporate is sharing best practices to eliminate labor-intensive tasks, like pre-folding boxes.

To offer more context on Domino’s Q3 performance, the quarter rolled over a 17.5 percent increase in Q3 2020, which was the best performance since the chain went public in 2004.

Here’s a look at how same-store sales have trended for the past two decades: 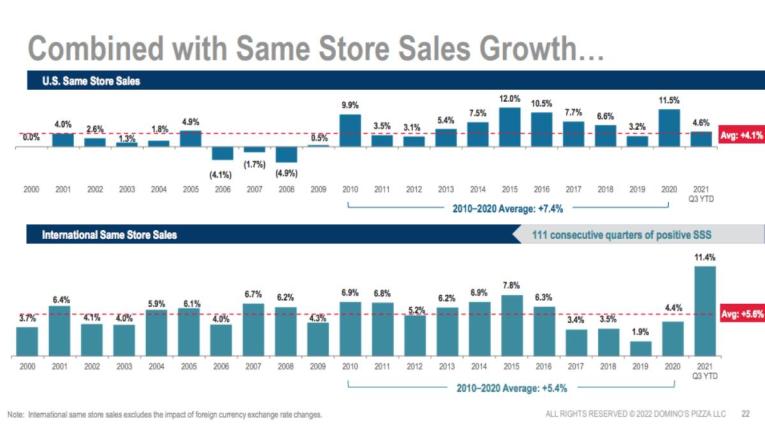 The impressive numbers have translated into continued enthusiasm for development and expansion. Domino’s ended Q3 with 6,741 stores in the U.S., but Allison said there’s enough white space for more than 8,000.

Internationally, the chain finished the third quarter with 11,909 units, but the company believes there’s room for nearly 8,500 locations in its top eight developed markets and about 11,400 stores in its top six emerging markets. Allison is confident in these projections because of Domino's partnership with strong master franchisees. The pizza chain's top five international operators (Australia, India, U.K./Ireland, Mexico, Eurasia) have a combined market cap of nearly $17 billion and oversee more than 7,900 stores. 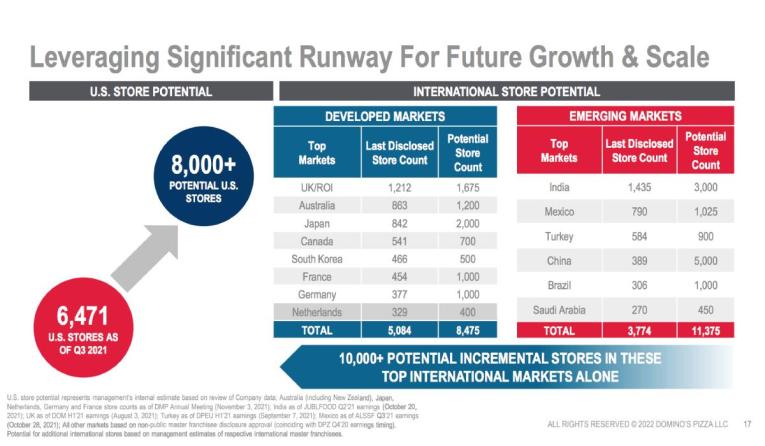 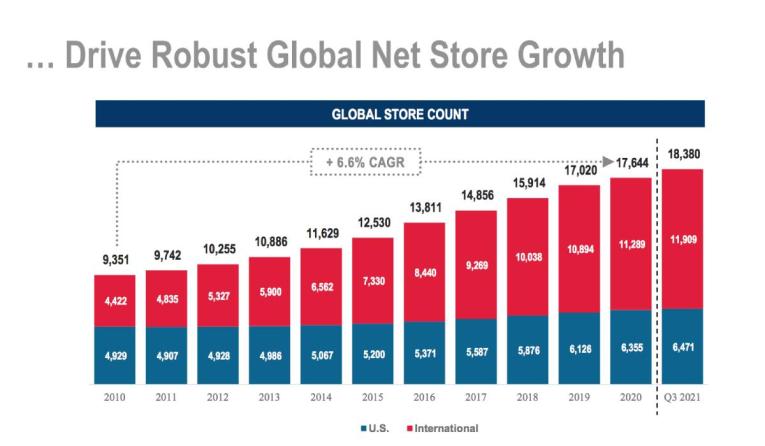 The most notable figure is China, which has received much attention from the quick-service pizza community as of late. In 2020, Domino’s spent $40 million to acquire a minority share of Dash Brands, its master franchisee in China.

Last year at this time, former CFO Stu Levy told the ICR Conference there was potential for 1,000 units, and in just 12 months, the projection has increased to 5,000, or a 400 percent increase. As for competitors in the market, Papa Johns recently signed a deal with Hong Kong-based private equity firm FountainVest Partners to open more than 1,350 stores in the country through 2040.