The company hauled in $2.1 billion in revenue, up 14.1 percent over 2020, and opened a net of 250 restaurants, including 50 in North America and 200 across the world. Also, AUV in North America surpassed $1.1 million and company margins were about 20 percent, which one analyst called “the highest that we’ve seen Papa Johns do even historically.”

In September, the chain inked a franchise agreement with Sun Holdings to open 100 stores in Texas through 2029—the company’s largest domestic deal ever. A couple of months later, the brand unveiled a major brand refresh, featuring a new restaurant design, logo and brand identity, particularly the removal of the apostrophe in its name.

“I don't think there's a lot to be upset about right now at Papa Johns,” Lynch said during the chain’s Q4 and 2021 earnings call.

The challenge now facing Papa Johns is how to follow up those results, especially rolling over the best first quarter in history, when North America and international comps skyrocketed 26.2 percent and 23.2 percent year-over-year, respectively.

READ MORE: Can Papa John’s Be as Big as Domino’s?

Lynch and his team are telling everyone that Papa Johns is going to lap 2021’s performance with sustained positive comp growth, maintained margins, and between 260 and 300 net new restaurants, which would represent 5 percent growth and be the largest development year on record.

“Papa Johns’ momentum today gives us more confidence than ever that we are positioned to consistently and sustainably deliver strong sales growth beyond 2022,” Lynch said. “Our view of our long-term unit opportunity, both domestically and internationally, continues to expand as we sign historic deals to develop within key areas of whitespace.”

The foundation of Papa Johns’ comp and development growth starts with menu innovation, including ticket add-ons and premium LTOs. The Epic Stuffed Crust, launched in December 2020, kept a high mix throughout 2021 and drove ticket and traffic in Q4. The brand also rolled out New York Style, which is a “key element of our positive outlook for Q1,” Lynch said.

The CEO noted average check is up significantly, and pricing hasn’t factored into that until recently. Most of it has been new and existing customers choosing innovation.

Lynch estimated the average pizza costs just over $10, while LTOs like Shaq-a-Roni, Epic Stuffed Crust, and New York Style are at $12-$13 nationally promoted price points—a 20-30 percent increase in cost per pizza. Additionally, innovations like Papadias and Jalapeño Popper Rolls have been additive to check as opposed to customers buying just those items.

“Papa Johns' ticket growth over the past couple of years has predominantly come through new premium products and add-ons that have allowed customers to self-select into our higher-priced innovation,” Lynch said. “This gives us more room today to manage and offset external cost pressures through pricing actions, while continuing to deliver quality and value to our customers. Also, since our value proposition is focused on delivering premium value, not around specific low price points, we have more flexibility around our pricing.” 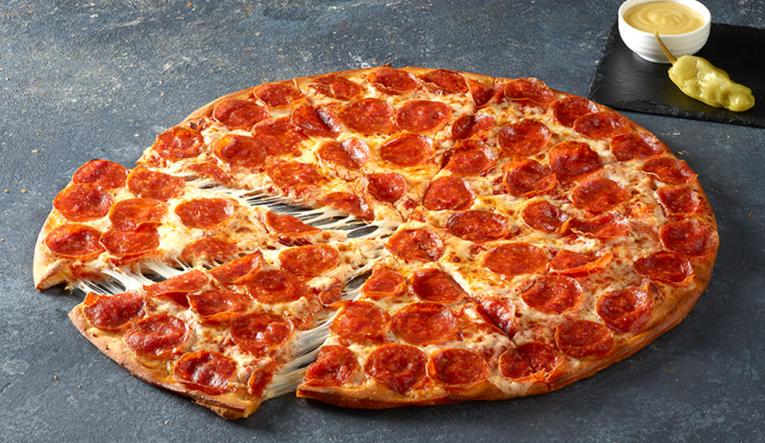 The brand’s rise has also been fueled by digital acceleration. Last year, sales through the app, website, and third-party delivery providers represented mixed more than 75 percent in the U.S., up more than 300 basis points from 2020 and 1,000 basis points from 2019. Those figures are largely supported by Papa Rewards members, or as Lynch described them, “our most valuable customers.” There are nearly 23 million loyalty guests, an increase from 17 million at the end of 2020 and 12 million in 2019.

“We are an e-commerce company, and we are investing throughout the company in technology,” Lynch said. “The aggregator partnerships are just one piece of that, a very important piece, a growing piece. We still believe that it's a symbiotic relationship. We work with those guys. We add a lot of value to them. We provide a lot of trips for them. We're one of their largest customers. So it's been a great partnership. We'll continue to foster that. And through these times of staffing challenges, it's been definitely a strategic differentiator for us.”

Papa Johns, however, has not been immune to the impact of Omicron. Restaurants experienced their lowest staffing levels in the first quarter since the pandemic began. In limited cases, it’s affected the brand’s ability to deliver or take orders. Those issues now appear to be decreasing, with staff returning quickly.

In terms of commodities and supply chain challenges, Papa Johns has managed to protect margins and offset costs thanks to “our world-class supply chain and procurement teams, as well as the operating leverage created from our comp sales growth,” according to Lynch.

“We don't have any issues with ingredient availability at this point,” Lynch said. “I think I mentioned chicken wings in our last call as one of our challenges; we've even mitigated that challenge at this point. So, supply chain is actually up and running, fully functional, operating at a high level, supporting our business.”

Lynch doesn’t anticipate supply chain disruptions impacting store openings either. Issues in the back half of 2021 came from equipment challenges in the U.S., and mostly affected company-owned restaurants. The CEO said those headwinds have been mitigated.

“We don't anticipate any challenges achieving the targets that we just put forward on the call here in 2022,” Lynch said. “This will be the biggest year of development in Papa Johns history.”