Inside Starbucks' Billion-Dollar Plan to Catch Up After COVID

Companies spend hundreds of millions to have one of the problems facing Starbucks, CEO Howard Schultz said. It’s why he called the chain’s standing, “completely half full,” despite admitting Starbucks’ core business has come under significant pressure. “Look at the assets we have,” Schultz told investors Tuesday. “Look at how many customers are reaching out to Starbucks every day. The demand is accelerating, and that's despite the fact that we're not doing our best.”

Starbucks’ North America and U.S. same-store sales increased 12 percent in Q2, driven by a 7 percent boost in average ticket and a 5 percent lift in transactions. Net revenues rose 15 percent company-wide to a Starbucks record of $7.6 billion as it opened 313 net stores and closed with 34,630 across the globe.

Schultz’s point about demand isn’t glancing. Starbucks’ mobile order and pay, a more than $4 billion business, is up 400 percent over five years (20 percent above 2021) and now mixes 70-plus percent of the chain’s U.S. store volume. The company's $500 million delivery segment hiked 30 percent, year-over-year. Starbucks’ Card program, which boasts usage of about 120 million people, is alone larger than the entire gift card category. Starbucks consumers prepaid for $11 billion worth of purchases last year. Today, there’s north of $1 billion loaded on Starbucks Cards that hasn't been redeemed. And the company’s rewards base in the U.S. lifted 17 percent over last year to 27 million members.

All noted, though, Schultz didn’t hide from reality. COVID-19 drove dramatic changes in guest behavior Starbucks stores and systems were not designed or built for, he said. Handcrafted cold beverages—now up to roughly 80 percent of sales—increased complexity; shifts in buying patterns, coupled with demand rising out of lockdowns, placed “tremendous strain” on employees.

Schultz said these disruptions interfered with Starbucks’ ability to anticipate and invest ahead of the market. It didn’t adjust store design, operations, infrastructure, or tech to meet “relentless demand.”

“Simply said, we do not, today, have the adequate capacity to meet the growing demand for Starbucks coffees,” Schultz said.

The company’s catch-up is going to be swift and costly, outlined Schultz, Starbucks’ founder, who returned April 4 in an interim role for Kevin Johnson (a new CEO is expected to be named in the fall).

Out of COVID, Starbucks Turns Focus to Wages, Efficiency, Sustainability

Starbucks plans to spend more than $200 million incremental in 2022 to investments already committed at domestic corporate locations. The total yearly bill will run about $1 billion, with much of it going toward training, wage, and equipment updates as Starbucks’ union conflict presses on.

As previously shared, Starbucks will move all U.S. employees to a $15 per hour floor this summer, effective August 1. But it will now add incremental increases for domestic store partners, while recognizing and rewarding tenure. On the same date, average hourly pay at Starbucks will be nearly $17 per hour nationally. All employees hired on or before May 2 will get either a 3 percent raise, or $15 per hour (whichever is higher).

The company’s efforts to modernize rates and benefits, boost training for baristas (from 23 hours to 40 come end of June), will compound in September with additional initiatives, including student loan refinancing, skills recognition, enhanced in-app tipping (more on this later), and new profit-sharing platforms.

But what’s key to all of it is the fact it will cover, as Schultz said, “more than 240,000 Starbucks partners and roughly 8,899 Starbucks stores across the country.”

What it won’t cover are locations with a union or where union organizing is underway. Schultz hinted previously Starbucks’ benefits and pay changes would exclude those spots, which are up to about 50 locations. “Partners in those stores will receive the wages increases that were announced in October 21, but Federal law prohibits us from promising new wages and benefits at stores involved in union organizing,” Schultz said. “And by law, we cannot implement unilateral changes at stores that have a union. Where Starbucks is required to engage in collective bargaining, we will negotiate in good faith. Starbucks will not favor or discriminate against any partner based on union issues. And we will respect the right of Starbucks partners to make their own decisions when exercising these rights.”

Past legal definitions, it’s a way for Schultz and Starbucks to underline something else he’s touted since taking the helm. “Compare any union contract in our sector to the constantly expanding list of wages and benefits we have provided our people for decades and the union contract will not even come close to what Starbucks offers,” Schultz said.

Starbucks will also launch a partner app in August to create a digital community among employees, with a focus on collaboration sessions.

The chain is bringing back its “Coffee Master and Black Apron” programs. Eligible employees who complete the program will have a chance to be selected for a “Leadership in Origin” experience at Hacienda Alsacia, Starbucks’ coffee farm in Costa Rica.

Going deeper into tipping, Starbucks said it’s going to introduce credit/debit card options by late 2022. Schultz described the digital tipping opportunity as “perhaps the No. 1 single issue to provide more cash in the hands of our people.” Presently, customers can only tip via the Starbucks Card. “That has been one of the most requested opportunities from our partners in the meetings I've had around the country, and this is something we're going to accelerate as much as we can,” Schultz said.

Brady Brewer, Starbucks’ CMO, added the chain will work on functionality throughout the calendar.

As winding as the employee conversation is, Schultz wanted to repeat one point. “Every Starbucks person who is a non-manager at Starbucks will be getting an increase in pay,” he said. 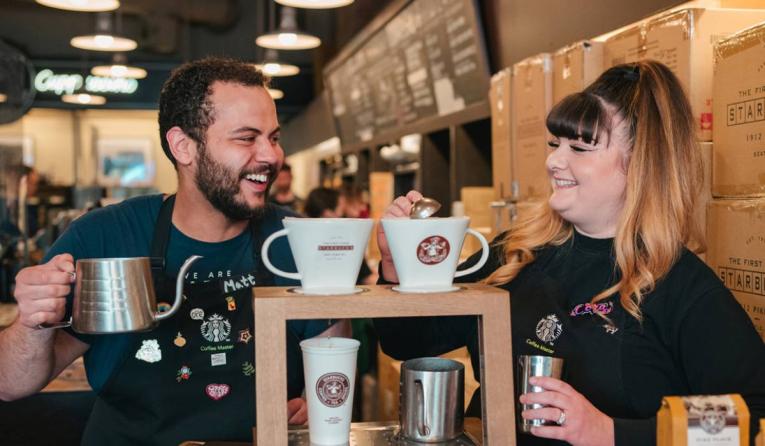 Changes in performance and Starbucks ‘Web 3.0’

Given all of the guest trends in play, most vividly on the digital transaction side, Starbucks’ models are adjusting. Ninety percent of new store growth going forward, Schultz said, will feature drive-thrus. And this coming fleet will integrate fresh store designs and technology, including more handheld devices and equipment improvements to boost throughput. Essentially, the line-busting tablets you see at an increasing number of brands coming out of COVID—a face-to-face ordering model Chick-fil-A and In-N-Out Burger have deployed for years.

Schultz added he feels Starbucks has a “breakthrough idea” on its hands around the launch of what’s being labeled “Starbucks Web 3.0.” While the company promised more details later—it’s moving its investor day up to September from December—the platform is essentially an arena for NFTs that’s going to be directed by Brewer and Adam Brotman, the architect of Starbucks’ mobile order and pay and digital app experience. “I believe Web 3.0 will create an authentic digital third-place experience and drive substantial new revenue streams for Starbucks and be accretive to the brand,” Schultz said.

Brewer said Starbucks’ aim to extend third-place positioning into a new community reflects what’s taken place over the past two-plus years, and is a way to bring “who Starbucks has always been at our core” into a changing climate. “We are creating the digital third place,” he said.

“To achieve this, we will broaden our framework of what it means for people to be a member of the Starbucks community, adding new concepts such as ownership and community-based membership models that we see developing in the Web 3 space,” Brewer added.

These initiatives will align with Starbucks’ sustainability commitments. “Imagine acquiring a new digital collectible from Starbucks, where that product also serves as your access pass to a global Starbucks community, one with engaging content experiences and collaboration all centered around coffee,” Brewer said, noting a launch would likely occur this year.

“In the world we're living in today, our customer base is getting younger, they're digital natives, and they expect Starbucks to be as relevant outside of our stores as we are inside,” Schultz said.

Going back to demand, Starbucks’ average ticket reached an all-time high in Q2. Naturally, price increases did much of the heavy lifting. But food attach and sales hit record levels, too, increasing 25 percent from the prior year.

Schultz said the equipment in Starbucks’ stores, as well as the layout, have not been configured for the way guests are using the brand today. Equipment and tech enhancements are on deck in turn, including resolving all “non-critical” repair and maintenance immediately, Starbucks said, and moving to upgrade all in-store iPads with new models. The company will speed rollout of new equipment like MerryChef Ovens and Mastrena 2 espresso machines as well.

Starbucks offers automated ordering across the U.S. for food and merchandise and is currently in proof-of-concept testing for beverage items, Schultz said. “That will also be an unlock to help improve the partner experience to reduce complexity and to allow our partners to focus on our customers,” he said.

Having too much demand wasn’t on Schultz’s plate when he last returned as CEO (2008–2017; he first held that title from 1985–2000). The opposite was true. “And so, the demand that we have right now is such a blessing, such a gift,” he said. “What we have to do is harness the issues that we have to deal with in terms of capacity, exceeding the expectations of our people. I've been here long enough to understand what the challenges are and long enough to understand the extraordinary opportunity Starbucks has in the marketplace domestically and around the world.”