Jack in the Box Begins the Journey to 6,000 Locations

The fast-food icon is ready to ignite growth in its 70th year.

When Darin Harris started as Jack in the Box’s CEO in June 2020, the top question asked by the investment community concerned new restaurant growth potential.

The second was how quickly the 70-year-old brand could make it happen.

The answer, according to Harris, is that Jack in the Box is capable of soaring past 6,000 restaurants nationwide by growing in new and existing markets. And that doesn't include nontraditional stores and ghost kitchens. As for how fast, the brand plans to ramp up to 4 percent annual restaurant growth by 2025.

To put into perspective how much of a shift that is, in the past 10 years, Jack in the Box opened an average of 21 restaurants per year, or a 0.9 percent average unit growth rate. In the same window, the sandwich segment (McDonald’s, Wendy’s, Taco Bell, Burger King, Sonic, etc.) grew by an average of 2 percent. Also, Jack in the Box’s 10-year average net opening rate is 0.2 percent, compared to 0.6 percent for competitors.

Harris attributed Jack’s below average growth rate in the past decade to selling restaurants to undercapitalized franchisees faced with intensive cash requirements for remodels and new restaurant development. This led to delays in many new build and remodel commitments, and a number of these stores never actually came to be.

Jack in the Box Reveals its Restaurant of the Future

Jack in the Box Celebrates 70 Years with Major Resurgence

Jack in the Box Gears Up for Major Growth Phase

Jack in the Box CEO: Franchisees Energized and Prepared to Grow

Under New CEO, Jack in the Box Wants to ‘Jumpstart’ Growth

“New restaurant growth underperformed for way too long,” Harris said during Jack’s Investor Day on Tuesday. “That’s behind us. By focusing on fundamentals, many of which have already seen meaningful improvement, it puts us in a better position than we have ever been. Our franchisees are now well-capitalized, our relationship with our franchisees is strong, and our business is extremely healthy, leading to franchisees wanting to put capital back into the brand.”

Currently, the chain has 2,228 U.S. venues across 21 states and Guam, with California (943), Texas (596), Arizona (173), and Washington (148) serving as the largest markets. However, ample whitespace remains, especially for a brand with this much equity and awareness among guests. In 13 of the 21 states in which Jack resides, the brand has built out less than 35 percent of the market.

Jack believes its capable of adding another 1,500 stores in its existing 21 states and more than 2,250 locations in the 29 states where it doesn’t have a presence, including all of the Northeast and Mid-Atlantic markets, and much of the Southeast. 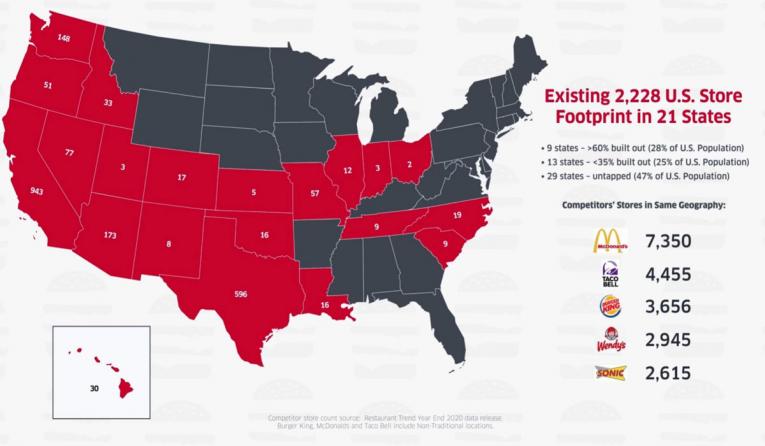 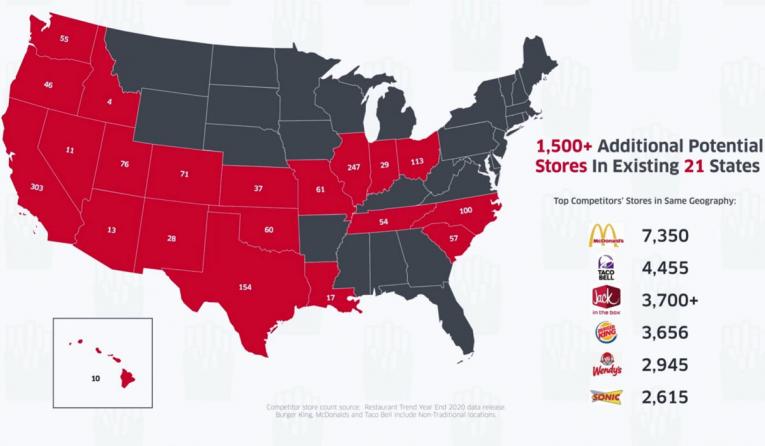 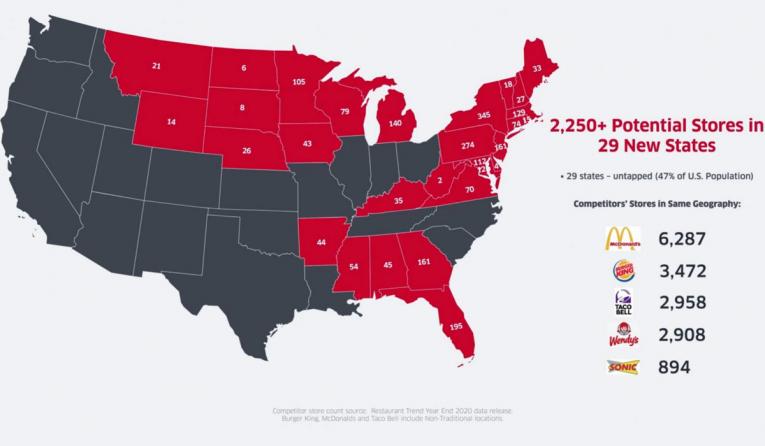 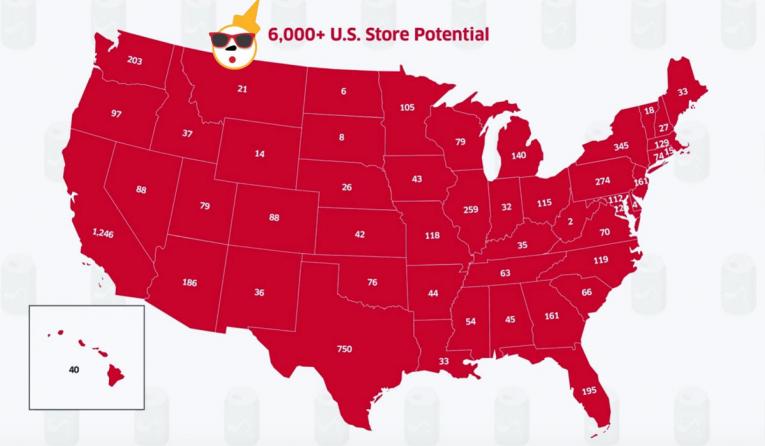 The approach will be three-pronged. Jack will leverage a fortressing strategy to build out and support existing markets like Los Angeles, San Francisco, Houston, and Phoenix. This should also help with off-premises business as Jack shrinks the delivery radius in markets it floods with units, not unlike the approach Domino's took in recent years to lower delivery times, boost metrics, and push back against third-party aggregators. Additionally, Jack will deploy a “wagon wheel” method to support adjacent market penetration, such as Colorado, Kansas, and Utah. In areas where Jack has no presence, the brand identified several strategic regional hubs that it will use as anchors for future expansion.

A majority of future growth will come from franchisees, but Harris emphasized Jack will continue to build company-run restaurants in underpenetrated markets to enhance the pipeline. He estimated corporate stores will comprise 5–10 percent of the footprint going forward.

“This company-owned growth supports our franchisee expansion efforts in a few ways—most importantly, by signaling to our franchisees that we have skin in the game,” Harris said. 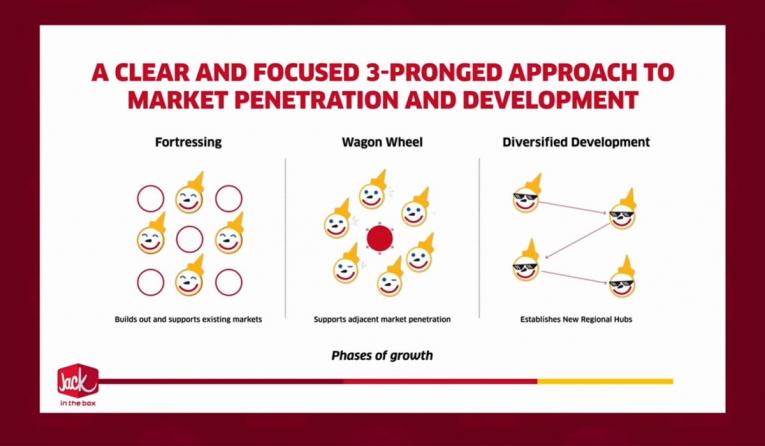 For the first time, Jack provided franchisees access to market plans and mapping tools for DMA, and modified polices that were previously barriers to growth. As a result, 80 percent of franchisees were approved to expand, more than doubling the recent past, Harris said.

The company also shifted its focus in terms of prototypes and real estate. Harris said Jack limited itself before to freestanding restaurants, and only kept a small number of units based in alternative formats and channels. But as Harris explained, these particular channels offer more compelling restaurant-level economics, so Jack created solutions to gain access to cost-effective real estate in the wake of COVID-19's shakeup of the landscape, such as urban centers, endcap, inline, conversions, military bases, universities, and travel centers. Jack also signed a deal with REEF Kitchens to open eight ghost kitchens in underpenetrated and fresh markets—a low-cost way to potentially seed a market or even test future brick-and-mortar demand.

Jack recently unveiled a new 1,300-square-foot drive-thru only prototype that’s less than half the size of Jack’s larger dine-in locations and boasts two lanes—one for regular orders and another for online pickup and third-party delivery. Jack projects the new model will reduce costs between 18–23 percent while also reaching sales volumes similar to the brand’s regularly sized stores.

Harris said one of the key learnings when he arrived at Jack was how lean its real estate pipeline had become. The CEO noted some of it was due to misalignment with franchisees, and other parts linked to pandemic pressures. However, Jack has now changed the process to be led by development agreements so it has forward commitments and proper market analytics to support franchisees.

The timeline of opening a store—from identifying a site to serving customers—takes 18–24 months, so filling the pipeline with development agreements at approved sites is imperative, Harris said.

“By working with a clear plan, along with committed franchisees, we can dedicate significant resources toward growth, partner franchisees with capital providers, signal to brokers that Jack is coming to the market with multiple sites, and that we want priority on sites and access to top opportunities,” Harris said.

During Q3, Jack in the Box expects to cross $4 billion in systemwide sales on a trailing 12-month basis for the first time in company history. In the second quarter, same-store sales increased 16 percent on a two-year stack, and average weekly sales per store grew 17 percent to $35,000. Average check rose 27 percent on a two-year basis, and transactions increased year-over-year for the first time since Q4 2019.