Jack in the Box Gets in the Fast Lane

Jack in the Box competes on value with bundles.

Jack in the Box admitted it’s one of the slower players in quick service. That’s true in-store and at the drive thru, where chief executive Lenny Comma said its pace “is in desperate need of improvement.”

Yet Jack in the Box also believes it’s on the verge of a breakthrough.

Speed isn’t a day two fix at Jack in the Box. The brand is looking at the target as a foundational project, Comma said.

“What we've done this time around that's a little different than the way we've looked at in the past is our operation services team has actually studied each component that they would like to change, and how many seconds' improvement that will lead to in the business,” Comma said.

The whiteboard goal: Become a minute faster on average by 2021. Shannon McKinney, the former VP of franchise operations at Bloomin’ Brands, who also headed up Outback’s training program, joined Jack in the Box in March as VP of operation services and field performance support.

Comma said McKinney’s team approached this speed concern from the base and worked up; every bolt and detail overlooked before. To date, they’ve identified equipment adjustments, such as retrofitting holding cabinets to preserve temperature and quality longer, to back-of-the-house corrections like simplifying build logic with sandwiches, which improved consistency. Both fixes removed complexity and quickened speed of service. Jack in the Box took these updates to test and saw immediate results, Comma said.

A YEAR IN REVIEW

Q3: Jack in the Box finds its place in the value wars

Q2: Drive thru takes center stage for the future

Q1: A pivot in menu strategy starts the year

WHERE DOES JACK IN THE BOX STACK UP IN SALES, AUV, UNIT COUNT?

At the drive thru in particular, Jack in the Box spent much of 2019 piloting components tied to overall experience, not just speed. It brought in new branding elements, digital menuboards, and designed parking for pickup and delivery.

The “drive thru of the future,” initiative was unveiled in August 2018. Other features included increased use of LED lighting and canopies that allow outside order takers, like Chick-fil-A. But these updates also coincide with what’s happening behind the operational curtain, speaking to the point Comma made in regards to fundamental improvements.

“As we start to see the crossover between the benefits from this test combined with the speed enhancements we've been testing separately, we're getting to a point where they are starting to converge,” he said.

Jack in the Box expects to finalize the elements of the upgraded experience and begin stretching systemwide later this year. The brand will take the top features, and those that promise the best return on investment, and move forward, Comma said. “… I think the consumer should feel like they're getting more when they go through a Jack in the Box drive-thru. So that's what we're trying to achieve,” he added. 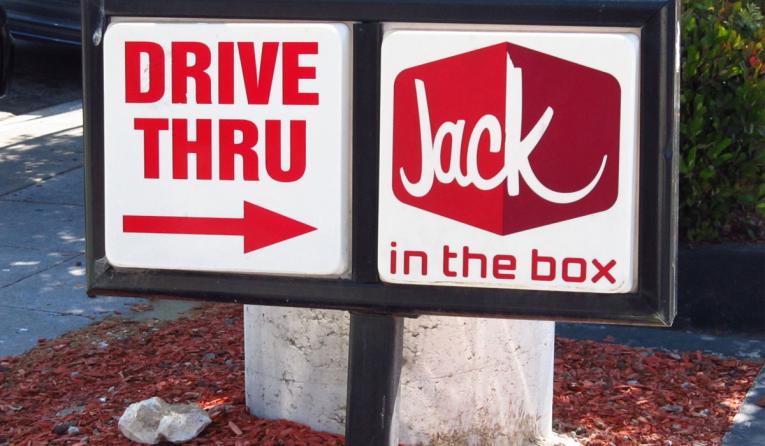 Jack in the Box knows it can speed up its drive thru.

Jack in the Box, aligned with quick-service norms, sees about 70 percent of its business at the drive thru. What’s also interesting for the brand is that half of the remaining 30 percent are takeout customers.

Convenience-driven elements and digital innovation, like order ahead and delivery, are where Jack in the Box’s guest is headed. It makes sense then to align investments.

The chain could cut back some SKUs as well as it works to improve times. Comma said that’s particularly true with sauces, bread carriers, cheeses, and other products that don’t necessarily get credit from diners. “We can still have great variety in our menu without having [these] sorts of ingredient counts to get there,” he said.

“But also, what we're seeing is that just procedurally, as we've brought some folks in from the outside and they look at the way we're running our operation, although we are close to a cook-to-order type entity, some of the ways that we cook our products, formulate our product, hold our product, our proteins, for example, we're kind of going about it at the hard way,” Comma added. “And with some tweaks both to equipment and procedure, we can make it a lot easier on our crews.”

A positive to take into 2020, and value stays the course

Jack in the Box reported same-store sales growth of 3 percent in Q4—its strongest performance in four years. The brand’s company comps upped 3.5 percent and franchise moved 3 percent versus growth of 0.8 percent and 0.4 percent, respectively, in the year-ago period. Of its 2,243 restaurants, 2,106 are franchised. It’s a 94 percent split achieved after last year’s refranchising initiative.

Total revenues for Q4 were $221.2 million and adjusted earnings were 95 cents per share, up from 77 cents last year.

As sales gain momentum, growth will, too, Comma said. The chain opened 19 locations in 2019, all franchised. Jack in the Box expects to ramp up in 2020 to 25–35 gross new unit openings (all franchised most likely). And that should accelerate further in years to come, he added.

Another 2019 change carrying forward is Jack in the Box’s menu strategy of using bundles to appeal to value-oriented guests. A focus on add-ons as well.

It recently launched $3 mini munchies, which features guest favorites like onion rings and curly fries. The deal provides value to customers seeking it, but also serves as a check driver in terms of building on.

“I think that's a little dangerous right now. If you look throughout the industry, transactions are really choppy. Most of the growth that's happening is happening through check." — Jack in the Box CEO Lenny Comma on deep discounting.

Jack in the Box launched a Breakfast Jack sandwich with chicken at 2 for $3 that Comma said helps it remain relevant in the breakfast daypart.

It’s a key move for other reasons, though, because it continues Jack in the Box’s efforts to reestablish everyday value it lost when it raised the price ceiling of its popular 2 for 99 cents tacos.

The brand has long approached value from two angles: refrain from deep discounting, especially at the core, and protect brand health and margins at all cost.

In the past, however, this materialized in differentiated products presented in bundles at lower price points. But the challenge was getting guests to add on proteins and other snacks. Concerning the latter, there wasn’t enough innovation to inspire upselling. As the company previously noted, 90-plus percent of its transaction losses were coming at the below-$5 price level.

Jack in the Box’s gap flashed with al la carte items, which skewed higher in price than competitors. People weren’t combining individual items to walk away with satisfying meals under $5.

So, today’s fix is bundled value from a more strategic angle. Pushing value through new items and LTOs so it’s not forced to discount core items where franchisees enjoy strong margins and have high sales mix,

There are $1 add-ons, like Donut Holes, to give operators leverage to suggestively sell. Then the value bundles allow Jack in the Box standing to compete in a marketplace that often has a la carte sandwiches and other items heavily discounted. The bundles now are generally touted at $4.99. Jack in the Box’s White Cheddar Cheeseburger combo was a recent iteration. LTO bundled-value boxes typically feature a new item or line extension coupled with a complementary add-on or upsell.

“It allows us to be in that marketplace, be competitive, offer value but do it in a way that's not completely deteriorating the margin,” Comma said. “And so overall, we think this is the right thing to do. Any profit associated with these types of offers and the up-sells that typically accompany these offers, we definitely believe in the strategy, and we'll continue to deploy it this way throughout the year.”

In sum: Competitive LTOs in the form of various daypart focuses, value bundles, and add-ons snacks and sides. An example is the Really Big Chicken Sandwich. Jack in the Box offered the product in the past but this time allowed consumers to upsell to four patties.

Comma said Jack in the Box prefers this approach given the quick-service state of traffic, where many chains are boasting mid-single digit average check growth to cover fewer transactions. “I think that's a little dangerous right now. If you look throughout the industry, transactions are really choppy. Most of the growth that's happening is happening through check. And at the same time, we're seeing still extremely competitive offers out in the marketplace, in fact, some very recently that have entered the marketplace that tell us that this price-sensitive environment has not gone away,” he said.

“And I think that for the long-term health of the brand, we've gone many years with attempting to grow through check. I don't think that's the overall healthy way to grow a business over the long term. You can maybe do that short term. So, I would like to see a healthy balance between price and other activities that drive transactions so there's a good mix between both.”