Jack in the Box's Growth Runway is Breaking Records

The chain has signed 50 deals for 201 restaurants.

Darin Harris joined Jack in the Box as CEO almost two years ago, with intentions of quickly changing the scope of franchise expansion.

Not even six months into his tenure, the fast-food chain and its National Jack in the Box Franchisee Association resolved a lawsuit stemming from 2018. Flexible, lower-cost prototypes and conversion opportunities were placed on the table, and massive expectations laid out, including 4 percent annual growth by 2025, a presence in 40 states by 2030, and more than 6,000 restaurants nationwide in new and existing markets.

The brand is making headway toward those goals.

During its fiscal 2021 (September 2020 to October 2021), Jack signed 23 development agreements to build 111 stores in the next several years, including growth in existing markets like Los Angeles, Dallas, and Houston, and new markets like Salt Lake City and Louisville.

The growth accelerated even further in Q1 2022, when the company completed 26 development agreements for 98 restaurants, nearly reaching its total for all of fiscal 2021. Combined, Jack has 50 deals and commitments for 201 stores—the highest level of unit growth commitments in company history.

Those restaurants should open across a period of three to four years, Harris said. He doesn’t expect the process to turn into a “unit growth story” until 2023.

“It’s all happening as we’ve expected,” Harris said during Jack’s Q1 earnings call. “The pace is picking up from a development activity standpoint and this is just with our existing base. We’re still out talking to new franchisees, as well, and increasing that pipeline.”

READ MORE: Jack in the Box Invests in Robotics to Curb Labor Issues

Those openings are based on the future. Right now, Jack is in the process of optimizing its footprint. The chain shut down a net of 10 stores in Q1, bringing its unit count to 2,208 restaurants (165 company-owned and 2,043 franchised). Year-over-year, it’s a net decline of 29 stores.

Six of the 12 gross closures in Q1 were related to a Jack franchisee near St. Louis that declared bankruptcy in early 2021.

“As it relates to closures, we’ve mentioned this before, but we’re continuing to do the tough work around optimizing our portfolio and preparing for growth,” Harris said. “The store closures that we had in this quarter, we knew were coming. We budgeted it. … Most of these were things that we anticipated and prepared for and we will continue to optimize the portfolio throughout this year as we focus on moving to that 4 percent growth rate by 2025."

Harris noted Jack has worked hand-in-hand with franchisees, leveraging data to map every market and drive sites into the pipeline. But like most of the industry, the biggest challenge is obtaining equipment, such as HVAC systems. To offset these pressures, Jack has used its balance sheet to pre-order many items in preparation of upcoming growth.

The good news is real estate is readily available to meet franchisee demand.

“At this point as far as sites, we’re still seeing an increased level of sites being submitted into our real estate pipeline,” Harris said. “So we have not seen the lack of drive-thru sites or that concern hamper our development. We’ve seen plenty of sites coming into the pipeline, all having drive-thru ability.”

Jack backed up its growth aspirations with same-store sales growth of 13.7 percent on a two-year basis in the first quarter, including 14.4 percent for franchisees and 7.2 percent for company-owned units. The comp growth was mostly fueled by price increases, in addition to an add-on menu strategy.

The brand is also coming off a record-setting year of store-level economics, most notably a 20 percent increase in store-level EBITDA. 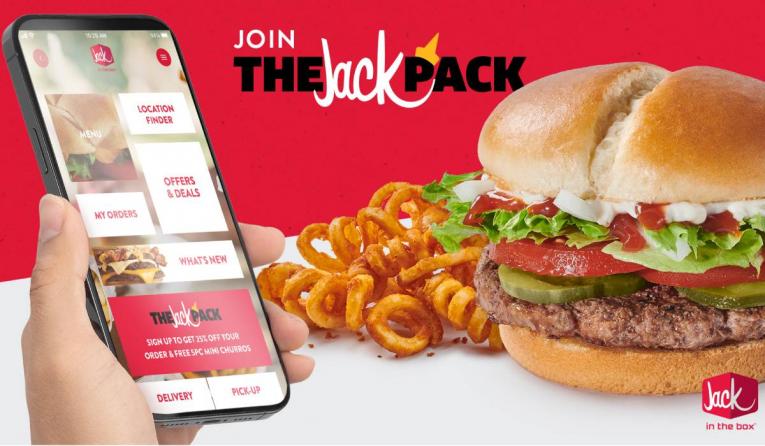 More than 95 percent of mobile orders are coming from rewards members.

Digital sales grew 38 percent in the first quarter year-over-year, and 271 percent compared to two years ago. The channel now accounts for 10 percent of sales, and the customer database has risen 52 percent year-over-year. The Jack Pack loyalty program is off to a fast start, as well. More than 95 percent of mobile orders are coming from rewards members.

This year, Jack plans to launch an in-store Jack Pack program and roll out its first online ordering platform and a new mobile web experience.

During Q1, Jack experienced wage inflation of 10.9 percent and commodity inflation of 10.5 percent, due to rises in price of beef, pork, sauces, and oil. To mitigate the high-cost environment, the chain increased menu pricing by 5.5 percent year-over-year at company-run restaurants.

Jack took 3.9 percent pricing in Q4 and in the mid-to-low threes in the preceding quarters. The brand hasn’t disclosed what franchisees have done with pricing, but CFO Tim Mullany said they’ve maintained a sizable increase over the company price take.

Average check has increased to just under $12 and average number of items per check has held steady.

“We’re comfortable with the price take that we’ve taken,” Mullany said. “We feel it’s in line with inflationary headwinds on the commodity and labor side. We think we do actually have more room to go on that should we need to, but we’re still in line with our original guidance of high-single digits.”

“Relative to the transactions, there’s always sensitivity to that,” he added. “But so far, what we’ve seen has been pretty much in line with our expectations and our modeling for price sensitivity versus trends. So there haven’t been any adverse indications that we should back off of our approach and strategy towards taking price in FY22.”

Jack partners with a third-party pricing authority to research how consumers are responding, and works closely with franchisees to investigate what they’re seeing in their specific markets.

A big question for the industry, Harris said, is determining what value truly means with everyone raising prices at the same time.

“For us, we stated multiple times that our strategy is working with both the customers that we segmented,” he continued. “We talked about some higher-end customers along with our core base, and the strategy that we’ve proven is that, have a very strong promotional offering with add-on and upsell opportunities, and we’ve seen that work and we’ll continue to do that and focus on that. And it’s working for us as a competitive differentiation in the industry.”

In 2021, Jack revealed it's also willing to grow through M&A with a $575 million purchase of Del Taco. The deal is expected to close around the second week of March. The two sides have begun the process of integrating teams and identifying meaningful synergies and knowledge-sharing initiatives, Mullany said.

Del Taco has roughly 600 units, which are about evenly split between the company and operators. Harris said Jack decided to purchase the fast casual with refranchising in mind.

“We’ve obviously, as part of our due diligence, looked at the portfolio, looked at where we think there is opportunity within our system,” Harris said. “We haven’t had a chance yet to meet their franchisees and see where there is opportunity within their system. And then, we also know that there is plenty of interest from outside the Jack in the Box system expressing both interest in Jack in the Box and Del Taco.”

2100 S. Clearwater Drive
Des Plaines
IL
847-803-5000
Chicago Faucets supplies quality products from the front to the back of the house. (more)
Financial Products