The brand now has more than 10,000 points of access across the world.

He recognizes that’s a bold statement. But he also knows the reality—the doughnut chain is well on its way toward getting there.

Unlocking another milestone this quarter, Krispy Kreme became the No. 1 brand in the sweets and chocolates category in the U.S., Australia, and the U.K, according to the chain’s annual global brand tracking study conducted by Service Management Group. The brand is also No. 2 in Mexico, Korea, and several other countries, trailing global chocolate brands. The CEO said “brand love” rose more than 50 percent, year-over-year.

For Tattersfield and the rest of Krispy Kreme leadership, the results showcase success of the company's hub-and-spoke model in which doughnuts are prepared fresh daily in production hubs and then transported to thousands of points of access, otherwise known as spokes, across the world.

“I truly believe it’s about our focus on fresh donuts via our omni-channel strategy that effectively and efficiently serves customers with premium and innovative brand initiatives across the globe,” Tattersfield said during the brand’s Q3 earnings call. “We compete in the $650 billion global sweet treat broad category against some of the best-known brands across channels. Our focus on fresh doughnuts and shared dozen occasions is clearly resonating with our customers.”

The momentum comes as the chain returned for its second stint on the stock market in July and raised $500 million in its IPO.

Krispy Kreme attributed growth to the performance and expansion of its hub-and-spoke setup. Systemwide, the doughnut chain now has 10,041 global points of access, which are all locations where fresh doughnuts or cookies can be bought, including hot light theater shops, fresh shops, carts and food trucks, delivered fresh daily doors (i.e. grocers), and Insomnia Cookies locations. That represents growth of 46.3 percent year-over-year.

“In the quarter, we continue to clearly demonstrate that our fundamental business is strong,” Tattersfield said. “Our hubs and spokes, supported by a world-class omni-channel strategy and e-commerce capabilities, are the core of our fresh doughnuts business. And every day these assets help us to deliver millions of doughnuts to people around the world.”

“As we continue to build our momentum globally, we also see opportunities to bring Krispy Kreme to more households through the expansion of our global footprint, which is where we will continue to invest while we maintain focus on delivering our long-term growth algorithm,” he continued. 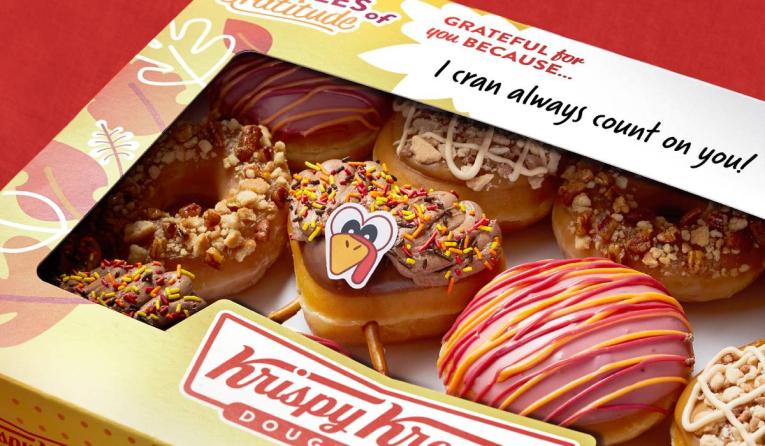 Krispy Kreme views New York City, which it compared to opening a new country, as having some of the best growth potential.

CFO Josh Charlesworth used Tampa, Florida, to demonstrate the power of the hub-and-spoke model. Krispy Kreme bought the franchise in August 2019 for $4 million, and at the time, annualized revenues were slightly under $8 million and local market EBITDA was under 10 percent. The market had one hot light theater shop and three fresh shops.

Since then, Krispy Kreme has remodeled legacy stores and added another hot light theater shop and 120 delivered fresh daily doors. Trailing 12-month revenue is now more than $12 million, and EBITDA margin is more than 25 percent.

“We’ve invested just under $4 million of additional capital since the temporary acquisition, but expect to invest minimum levels moving forward, making a rapid payback on our investments overall,” Charlesworth said.

Krispy Kreme views New York City, which it compared to opening a new country, as having some of the best growth potential. Currently, the city has one production hub and 150 points of access, but the doughnut chain believes it could rise to the level of London, which has five hubs and 600 points of access.

“It took us 10 years to fully build out the London market, which is a highest-margin market,” Tattersfield said. “But we think we can do the same kind of expansion in New York in half the time. The majority of our upfront investing is complete and our profitability will continue to improve as the rest is built out and capital light.”

In domestic markets where the hub-and-spoke model is more mature, margins saw a 300 to 400 basis points benefit in Q3 due to higher price points of fresh doughnuts and efficiency benefits from the local delivery model. Krispy Kreme has a goal to reach a 15 percent adjusted EBITDA margin in the U.S. and Canada in the next three years.

In Q3, adjusted EBITDA margin was 9 percent, down 110 basis points from 2020. The drop is due to multiple reasons; the third quarter is historically Krispy Kreme’s lowest-margin quarter, and the chain is still facing double-digit commodity inflation from wheat, sugar, edible oils, and gasoline, and labor inflation in the high-single digits.

To mitigate costs, the chain implemented a price hike in late September, which mostly occurred in the U.S.

“We’re seeing good acceptance of that with customers in October and that is intended to cover all commodity and wage inflation that we see out there in the market,” Charlesworth said. “We will keep a close eye on the inflation trends. We will and are prepared to take further pricing action, if needed, to make sure we carry that momentum into next year, as well.”