The burger chain has a new COO and CFO as its top executive leaves.
Fast Food | November 2019 | Danny Klein

Krystal worked with Chris Wunder at Leap Hospitality on the hires.

The news comes as CEO Paul Macaluso, a former McAlister’s Deli president who joined the brand in April 2018, is leaving the company. Krystal said he was departing, along with CFO Berry Epley, “to pursue other opportunities.”

A Krystal representative told QSR that Epply and Vermilyea overlapped in the CFO role over the past month. It was a planned transition and unrelated to Macaluso’s departure.

Macaluso left Krystal at the end of last week. Given that his move was unexpected, Ward’s role as president is effective immediately. The company said he was already onboarded as COO and the newly created position was a logical step in Krystal’s continued revamp, given its plans to refranchise 100–150 stores, announced in October. It also fit the brand’s heightened focus on operational excellence, Krystal’s representative said.

Ward comes to Krystal from Captain D's, where he served as chief operating officer. During his tenure with Captain D's, the company reported eight straight years of positive same-store sales and developed a pipeline of over 100 locations. Ward held previous roles at Arby's/RTM and NPC International/Pizza Hut.

"Krystal is a brand that I have long admired, and I could not be more excited about the opportunity to lead this organization," Ward said in a statement. "I have long felt that Krystal had so much more potential as an iconic, 87-year old brand, and I'm looking forward to making that happen."

"We're adding Tim and Bruce to the team because of the operational excellence they have driven at brands that have a lot in common with Krystal," said Michael A. Klump, founder and CEO of Argonne Capital Group, which owns Krystal and other multi-unit concepts, in a statement. "We look forward to working with Tim, Bruce and the rest of the Krystal team to build upon some of our recent wins including facility improvements, improved food quality, a recently announced refranchising initiative and the signing of our first franchise development agreement in over a decade." 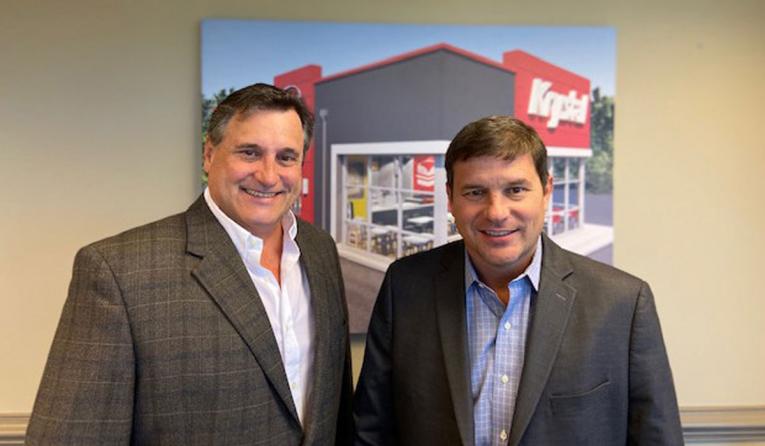 Krystal worked with Chris Wunder at Leap Hospitality on the hires.

The legacy brand found success under Macaluso with a “scrape and rebuild” program that’s generated year-over-year comp sales ranging firm 29.8 to 107.5 percent for the periods each of the nine completed units have been opened.

The chain also recently signed franchisees Anand Patel and Kalpesh Das of Slider Joint, LLC to a three-unit deal in Jonesboro, Arkansas. Das and Patel are the first new franchisees to join Krystal since 2005.

Krystal added delivery throughout much of the system in Macaluso’s tenure and is currently working on mobile ordering.