Additionally, McDonald’s eclipsed $100 billion in systemwide sales for the first time, serving nearly 70 million people in over 100 countries every 24 hours.

McDonald’s spending isn’t going to curtail moving forward, however. The chain said it expects 2020 SG&A expenses to increase 5–7 percent as it invests in new technology and absorbs costs related to an upcoming convention. The total bill will run about $2.4 billion, with $1.3 billion dedicated just to McDonald’s U.S. business—a segment that continues to counter declining traffic with higher check, and dropped in store count from 13,914 to 13,846 this past year.

Proof McDonald's is getting even more serious about tech

McDonald’s said more than half of its $1.3 billion U.S. target will be allocated to 1,800 Experience of the Future redesigns. Globally, the chain plans to open 1,400 or so restaurants and net 1,000. McDonald’s corporate expects to contribute $800 million to debut 400 units.

CFO Kevin Ozan said Wednesday “substantially all” openings would be in markets outside the U.S.

The chain’s No. 1 priority near-term is “getting the U.S. to positive guest count growth,” said CEO Chris Kempczinski, who took over for Steve Easterbrook in November.

McDonald’s U.S. comparable guest counts declined 1.9 percent in 2019 after falling 2.2. percent in 2018. The figure has tracked negative all but one year since 2012. In the chain’s international operated markets, traffic rose 3.5 percent after upping 2.8 percent in 2018.

Fewer customers, but higher spend is a story told throughout the restaurant industry today. Kempczinski said, at this point, it’s going to have to come through stealing share. In other words, the opportunity lies in converting customers of other brands as much as it involves inspiring new ones. “There’s very little traffic growth,” he said. “In fact, if you’re not growing units, you’ve got a headwind there.” Growth to offset cost headwinds.

Kempczinski added that McDonald’s did see “modest sequential improvement” with traffic in Q4 but it’s too early to call it a trend. “We’ve got to see this happen over four or five quarters. And so, it’s going to be something we’re going to be paying attention to and I’m sure you guys will be asking us about it as well,” he said. 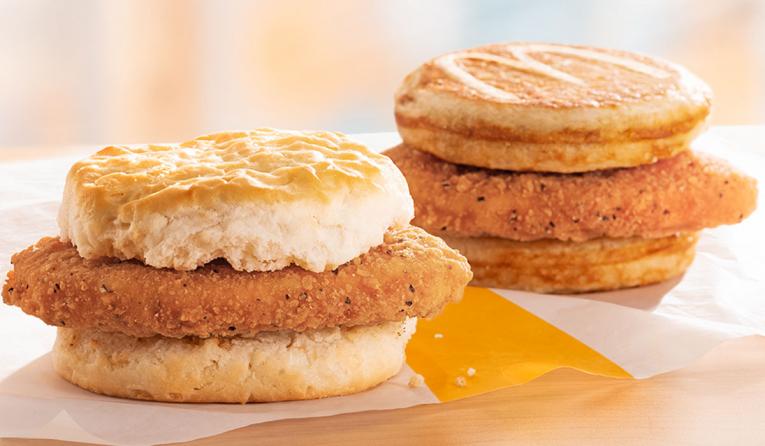 So where is McDonald’s top-line expansion coming from? The brand has taken a multi-pronged approach to driving check and capitalizing on a confident customer. Currently, it’s comprised of 60 percent mix and 40 percent pricing for the brand—a relatively consistent equation throughout 2019. Between delivery and the self-order kiosks found in Experience of the Future stores, McDonald’s generally sees a higher number of customers per ticket than it used to.

BTIG analyst Peter Saleh estimated Thursday in a note that average check increased 7 percent (4.2 percent menu mix and 2.8 percent pricing). All dayparts had positive comps while traffic continued to decline, and McDonald’s lost share at breakfast given it’s the only daypart with positive traffic.

Kempczinski said the chain hasn’t been a “one-trick pony” when it comes to lifting check. Delivery, for one, is generating orders roughly twice the size of dine-in. Dynamic Yield, McDonald’s $300 million acquisition last year, is leading to add-ons thanks to its suggestive selling capabilities at the drive thru (deployed in nearly all outdoor digital menuboards in the U.S. and Australia, or 10,000 domestic locations). The kiosks have resulted in larger orders, too. McDonald’s $1 $2 $3 value menu is also a helpful check builder given guests often tack on items to other orders. Pricing can’t be discounted, either. “The inflation that we’re seeing out there, particularly on the labor side that does get priced through, and so I think as we head into 2020, the conversation we’ve been having with franchisees … is we’ve just got to make sure that we have balance. We need to have a balance between check growth and we need to get to transaction growth, and that’s what everybody in the U.S. is working toward right now,” Kempczinski said.

As it has for some time now, the traffic conversation always back to breakfast for McDonald’s, an occasion that accounts for about 25 percent of total sales. Kempczinski said its U.S. segment “is centered on stemming” guest count declines at the daypart by focusing on running better operations, introducing new menu items, and offering “delicious food at a compelling price point.”

It’s a straightforward concept. “… we have a really good understanding of what it’s going to take for us to drive guest counts to positive in the U.S.,” he said. “It starts with breakfast. Breakfast is the only daypart in the industry that’s seeing traffic growth. We have to win at breakfast.”

“There’s obviously a lot of focus and attention that we’re going to be putting on that in 2020.”

Kempczinski said McDonald’s has a “pretty strong breakfast plan,” this year. He didn’t telegraph too many details, only to say there will be a combination of menu news, “some service things” and, naturally, the need to remain competitive from a value standpoint. “But there is a lot of other things that we still have on the calendar,” he said.

“And so, if you think about a couple of years ago, we talked about really focusing on food and it was going to be a focus on burger, chicken, and coffee,” Kempczinski added. “And I think you’re going to see for us, in 2020, that there’s going to be burger news, there’s going to be things that we’re doing there that continue to keep driving our [Quarter Pounder] business, which really has been a standout performer for us the last couple of years.”

He also spoke briefly about McDonald’s chicken plans, which have surged into the spotlight lately thanks to the battle between Popeyes and Chick-fil-A. The brand said earlier in the week its Crispy Chicken Sandwich product “might blow your mind.” Piloted in Knoxville, Tennessee; and Houston, there hasn’t been much follow-up to the potential timing of a larger rollout.

Kempczinski said Wednesday McDonald’s was “committed to really updating it and competing in an aggressive way in the chicken segment, so you should expect something there,” but didn’t share any dates.

“There is no question that digital is transforming global retail. Across the system, there is great excitement about the role it will play in transforming McDonald’s by strengthening and deepening relationships with our customers,” McDonald's CEO Chris Kempczinski says.

The company announced Tuesday that it was adding Chicken McGriddles and a McChicken Biscuit breakfast sandwich to its early offerings for the first time (both are LTOs).

Kempczinski added it’s important to note McDonald’s breakfast innovation in 2020 won’t come at the expense of the rest of the day. A recognition, he said, on “rest-of-day value” needed to combat intense promotional activity in the quick-serve sector.

“… we have a very detailed and intimate understanding of what our competitors are doing there,” Kempczinski said of chicken in particular. “I think, for us, it’s really all about finding a product that works in our restaurants.”

“Like anything with menu in McDonald’s, it’s a little bit of a Rubik’s cube of what’s the customer looking for, what works operationally, and then the business fundamentals under that,” he added. “But I think I feel good about where we’re going to add on with chicken. I think we’re getting close to having something that we’re excited to bring to customers.”

More on Dynamic Yield, the coronavirus impact, and other changes

To date, the platform has done what McDonald’s hoped it would do, although there’s still data to glean and refinements to make. Kempczinski said Dynamic Yield is helping the chain make smarter recommendations to customers of menu items they are likely to want (and order).

“There is no question that digital is transforming global retail. Across the system, there is great excitement about the role it will play in transforming McDonald’s by strengthening and deepening relationships with our customers,” he said.

Kempczinski said he doesn’t foresee buying tech companies as a company approach moving forward. When McDonald’s acquired Dynamic Yield, it marked the first sizable purchase for the chain since scooping up Boston Market for $173.5 million two decades ago. McDonald’s also bought Apprente in 2019, an early stage leader in voice-based, conversational technology that is testing in a handful of U.S. restaurants. 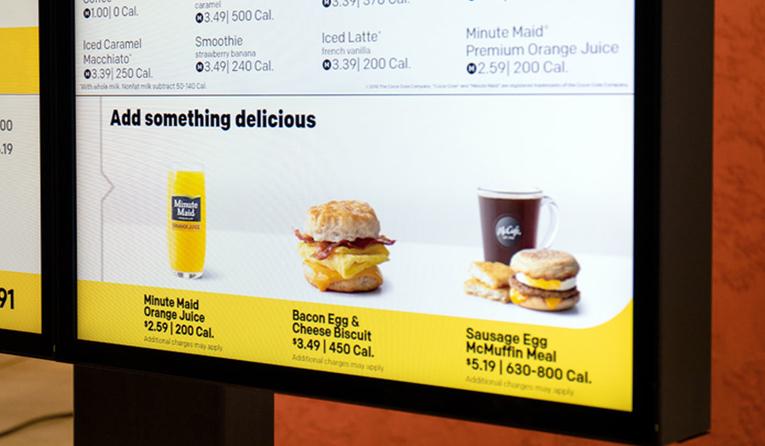 McDonald's Dynamic Yield technology offers potential beyond the drive thru.

For McDonald’s, though, Dynamic Yield represents future opportunity beyond the drive thru, which is one reason the company wanted to bring it into the fold and nurture its development. “The big positive about Dynamic Yield is our plans would be to take that similar decision engine-type logic and be able to use that further in kiosk and global mobile app ultimately so that we can continue getting further sales lifts in other digital mechanisms also,” Ozan said.

Tech is working its way throughout McDonald’s system. The brand completed about 2,000 Experience of the Future projects in 2019 and is on track for just about all restaurants to be modernized by the end of 2020. Kempczinski said U.S. customer satisfaction scores are at an all-time high.

McDonald’s delivery platform now covers nearly two-thirds of its total system, or 25,000 locations. In three years, delivery has gone from generating $1 billion in sales to more than $4 billion.

Kempczinski said McDonald’s also improved speed of service by an average of 20 seconds in its largest markets and believes there’s an additional 20–30 seconds that can taken out this year through menu simplification and training. The brand uses ZOOM timers in restaurants to breakdown the customer journey at the drive thru, which accounts for 70 percent of McDonald’s sales.

“I think in 2020, it’s going to be a lot of blocking and tackling. Longer term, we’re obviously very excited about what technology can do to help with speed of service, which is why we’ve done acquisitions like we did with Apprente,” he said. “If we’re able to get that commercialized and deployed, that’s certainly going to be something that helps us with the speed of service in the future."

McDonald’s also provided an update regarding the coronavirus impact in China. The company said it closed “several hundred restaurants” but still has roughly 3,000 open. That’s a stark contract from the 2,000 Starbucks said it needed to shutter.

China represents about 9 percent of McDonald’s global restaurant count, 4–5 percent of its systemwide sales, and 3 percent of operating income.

“With the China team, we’ve put in place an epidemic prevention and control task force, which is something we’re doing again in combination with the local authorities there,” Kempczinski said. “And it’s everything from using our kitchens to help provide meals to health care workers in hospitals. We’re doing things in terms of giving medical screening for customers who come to some of our restaurants. So it’s really an "all hands on deck" effort from that vantage point.