Customers don't appear resistant to the inflation, the CEO said.

McDonald’s is one of the biggest players in the quick-service space, but the burger giant is not above industry and consumer trends.

The chain traces much of its recent success to what others are experiencing—average check growth and increases in menu prices. The two factors helped U.S. same-store sales grow 9.6 percent, year-over year, in the third quarter, and 14.6 percent on a two-year stack. The growth pace continued into October, with comps hovering in the low double digits on a two-year view. That range should remain throughout the rest of Q4, the company said.

Labor and commodities continue to place pressure on pricing, however, which has increased 6 percent, year-over-year. Franchisees experienced 10 percent wage inflation year-to-date, and company-run stores have observed more than 15 percent. Commodities are up roughly 2 percent through the first nine months, but McDonald’s expects the full-year comparison to be a 3.5 to 4 percent increase.

With all that said, CEO Chris Kempczinski noted the brand hasn’t witnessed any more resistance to price increases than it’s seen historically.

“The 6 percent has been pretty well-received by customers,” he said during the brand’s Q3 earnings call. “We do certainly have a very big focus to make sure that we are balancing cost pressures and being able to cover those with making sure that our value perception by customers continue to be favorable, and we are continuing to see those surveys and scores from a value favorability perspective still positive from customers.”

As for average check growth and larger order sizes, CFO Kevin Ozan said the trend lasted much longer than McDonald’s anticipated. He added much of the sales are coming via drive-thru, delivery, and digital—areas where customers primarily order for larger groups.

“If you're getting delivery, you're getting it for your family or for at least a couple of people,” Ozan said. “A lot of the folks going through drive-thru are getting orders for several people.”

Ozan believes some of the growth in average check will prove sticker than originally thought. He also doesn’t think trends will return to pre-pandemic levels anytime in the near-term. A major reason being McDonald’s continued investment in off-premises channels breeds bigger orders; in the brand’s top six markets, more than 20 percent of sales, or about $13 billion year-to-date, have flowed through digital channels.

A significant source of the digital explosion was the national launch of MyMcDonald’s Rewards, the brand’s first loyalty program. More than 21 million members have enrolled, and north of 15 million are active and earning perks—a group that’s full of customers responding with better satisfaction and higher frequency compared to non-digital consumers.

In September, McDonald’s launched the program in Germany. It’s on track to roll out in Canada by the end of 2021 and to the U.K. and Australia in the first half of 2022, which will place MyMcDonald’s Rewards in the chain’s top six markets.

Kempczinski said the goal is for 40 percent of guests to be known customers. Today, it's only 5 percent.

“You can imagine all sorts of things that you're able to learn about customers and their preferences when you're able to get more and more of your transactions where you know who the customer is, and loyalty is certainly the way that you get that customer to engage and share information with you,” he said. 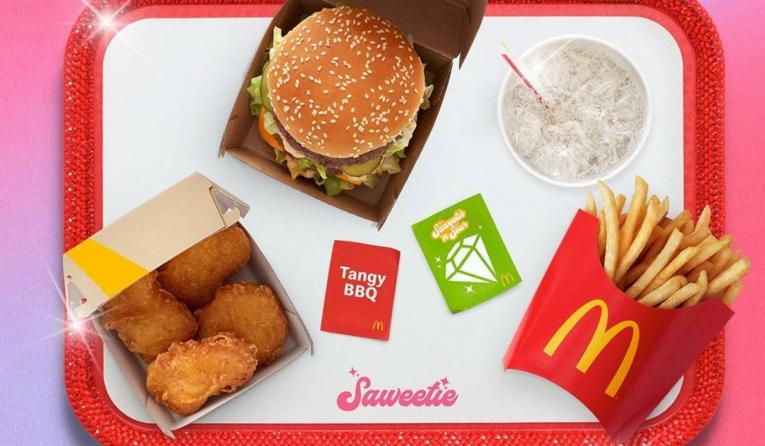 Although McDonald’s continues to place greater emphasis on digital sales of late, the brand isn't writing off dining rooms. It's reopened nearly 80 percent of its lobbies in the U.S., with roughly 3,000 remaining closed in high-risk COVID areas. At restaurants that feature an open cafe, front counter and kiosk sales are still below pre-pandemic levels, but modest increases in these channels helped relieve pressure in the drive-thru.

Kempczinski said McDonald's started thinking about potential scenarios of how to reuse space if dine-in never snaps back to pre-COVID levels. However, he emphasized talks are preliminary and McDonald’s doesn’t want to do anything until it gets a better read on where things land.

Ozan also pointed out that dining rooms in the U.S. and Europe are not the same conversation.

“Certainly in Europe dine-in is a bigger percentage of our sales and is an important part of that business, and we have seen dine-in return,” the CFO said. “I mean, kiosk usage is getting back to almost where it was pre-pandemic, and so the family business is very important in Europe. To [Kempczinski’s] point, we got to be careful about what we do, because it isn't the same around the world as far as dine-in business and how customers view that side of the business.”

McDonald’s said its Famous Orders platform and Crispy Chicken Sandwich, which is exceeding expectations, also contributed to strong comps growth. Additionally, the brand is seeing positive same-store sales across all dayparts on a two-year basis, with sustained double-digit comp increases at dinner and breakfast.

Kempczinski said staffing woes have caused limited operating hours and slips in speed of service, but he also noted that franchisees are still hauling in record-high restaurant cash flow.

“Our U.S. franchisees have never been better positioned to weather the labor and inflation pressures, while still investing in growth,” the CEO said.

Outside of the U.S., International Operated Markets grew same-store sales 13.9 percent year-over-year, and 8.9 percent on a two-year basis, driven by strong results in the U.K., Canada, France, and Germany. International Developmental Licensed Markets lifted 12.7 percent in Q3, or a rise of 4.9 percent on a two-year stack. That group was led by growth in Japan and Latin America, and partially offset by negative comps in China due to COVID resurgences.