Tech changes are coming fast for the top earner in the business, but they're also coming at a cost.
Fast Food | October 2019 | Danny Klein

McDonald's delivery sales have quadrupled in the last three years.

If you trace back four or five years ago, McDonald’s was spending on tech. It’s just nobody was talking about it. It was back-of-the-house moves “to keep the restaurants operating,” as chief executive officer Steve Easterbrook put it during Tuesday’s quarterly review.

Lately, though, the top earner in fast food has taken a far more aggressive, consumer-facing approach, and people are taking notice. But it’s come at a premium.

While McDonald’s thinks long-term, powering tech through acquisitions, like its $300 million purchase of Dynamic Yield and last month’s deal for Silicon Valley voice recognition startup Apprente, as well as the creation of “McD Tech Labs,” year-to-date G&A spending is up 1 percent, CFO Kevin Ozan said. The brand expects full-year G&A to rise 1–2 percent in light of these strategic moves. If you factor in Experience of the Future remodel capital (1,500 converted stores so far this year and 2,000 expected by 2020), these changes have stirred some short-term financial headwinds for McDonald’s, like lower gains on sales of restaurants and higher depreciation, to go along with G&A expenses.

Why McDonald's tech should alert competitors

How did McDonald's fare in this year's QSR Drive-Thru Study?

It’s a worthwhile burden, Ozan said. “Our belief is those who aren’t investing in technology at some point while be behind and will need to catch-up,” he said. “And we’d rather be a little bit ahead of the curve and spend the around amount that we think will drive future growth.”

McDonald’s Q3 results generated a frenzied response from investors. The company’s quarterly report fell short of estimates for the first time in two years and resulted in shares swapping hands at the lowest level in more than four months. McDonald’s had beat sales and earnings per share estimates 75 percent of the time over the last 24 months. It missed both in the period that ended September 30.

McDonald’s also grew U.S. comps a solid 4.8 percent, although it was comprised of a “healthy average check increase,” driven by product mix changes (two-thirds) and menu pricing (one-third as domestic pricing was up nearly 3 percent), and not traffic. Ozan said there wasn’t a meaningful change in domestic guest counts in Q3 compared to the first couple of quarters in 2019. It’s still negative and “our largest opportunity,” he said.

Ozan noted there was some competitive pressure in mid-August through mid-September that lessened toward the end of the period. While not referencing it directly, Popeyes’ chicken sandwich dropped August 12 and ignited a social media firestorm—a battle McDonald’s was not an active participant in.

"The world is different than it was in 1955. Different today even it was four years ago when we launched our turnaround," Easterbrook said. "We're keenly aware that we have to be ahead of these changes, investing, executing and growing with a deep sense of urgency and purpose."

Easterbrook said average franchisee restaurant cash flow was "moving in the right direction" with 11 consecutive months of growth through September. 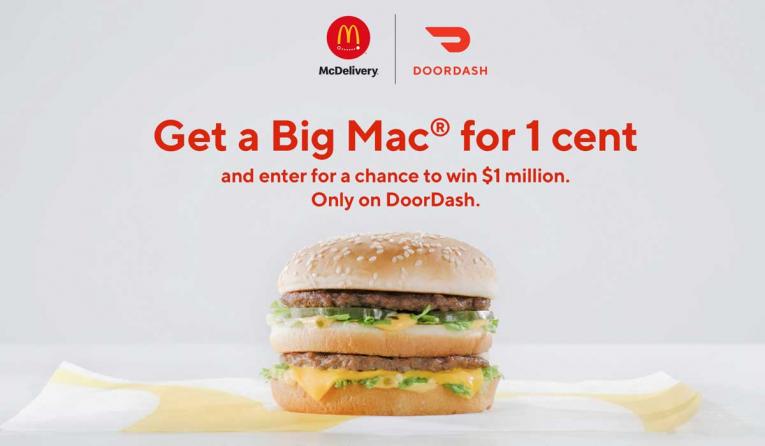 McDelivery will expand to more than 10,000 restaurants nationwide by the end of the year, covering over 70 percent of the U.S. system.

Lost in some of the stock scurrying Tuesday was McDonald’s sizable tech updates. Notably, delivery.

Easterbrook said the channel is expected to drive $4 billion in sales for the brand this year, or roughly 4 percent of its global business. That’s four times what it was just three years ago. Delivery has expanded to 23,000 or so restaurants in more than 80 countries and, throughout the system, produces average checks twice those seen in-store. McDonald’s broadened its U.S. reach this year by adding DoorDash and GrubHub after exclusively operating with UberEats.

Easterbrook said McDonald’s witnessed an increase in average restaurant McDelivery orders in units when it brought on DoorDash—a push that came with a 1-cent Big Mac offer to generate awareness. “Delivery remains a big frontier for our business, and we still have a long way to go, even with our existing customers, to encourage awareness and trial,” he said.

To illustrate how sizable this frontier truly is, Easterbrook added, customers are currently placing 10 delivery orders per second on average globally. So, just during the company’s nearly hour-long call Tuesday, there were roughly 36,000 McDelivery orders.

The brand’s "McDelivery Night In" took place in 50 markets this year, double from 2018, and led to a 25 percent-plus lift in global business. The halo effect the following day drove the most delivery orders on a single day in company history, Easterbrook said.

"As we prioritize awareness and trial, we're encouraged by data showing that new or lapsed users accounted for a significant portion of the global sales lift," Easterbrook said.

As for other changes, McDonald’s Dynamic Yield technology is now live in more than 9,500 U.S. drive thrus, with full rollout to every restaurant with an outdoor digital menuboard expected by year’s end. All of Australia is also expected to onboard by 2020.

“Ultimately, Dynamic Yield will facilitate a range of personalization benefits where we can leverage knowledge of the customer and order patterns to provide a tailored experience in restaurants, at the drive-thru and on our app,” Easterbrook said.

“Whether we look across the tech or consumer world, we see voice technology playing an increasing role in all our lives. And for McDonald's, this is particularly significant because of the importance of drive thrus to our portfolio." — McDonald's CEO Steve Easterbrook

The heart of the technology allows McDonald’s to vary displays to show food based on time of day, weather, current restaurant traffic, and trending menu items. And the decision tech also instantly suggests and displays more items to a customer’s order based on their current selections.

Perhaps more notable, though, is its core capability for suggestive selling. “The beauty of this is there is nothing the customer has to adjust to. They almost don't know that this experience is happening for them,” Easterbrook said.

Once guests start their orders, the menuboards respond. They suggest items a customer will want and avoid ones they won’t. Through machine learning and transaction levels, Easterbrook expects that to get more accurate over time.

In regards to trending, Dynamic Yield picks up items that are moving in that specific restaurant or at nearby stores, and suggests them. And this dynamic interaction will almost surely integrate into McDonald’s self-order kiosks and, perhaps, in its global mobile app, in time.

BTIG analyst Peter Saleh estimated it could eventually generate 130–200 basis points of incremental menu mix. If you peg the price of a medium French fries, drink, and Chicken McNuggets at $1.43, and Dynamic Yield successfully upsells 10–15 percent of consumer transactions in the drive thru, where two-thirds of McDonald’s sales come, it will represent a major boon.

Here’s a sales breakdown of the possibilities. 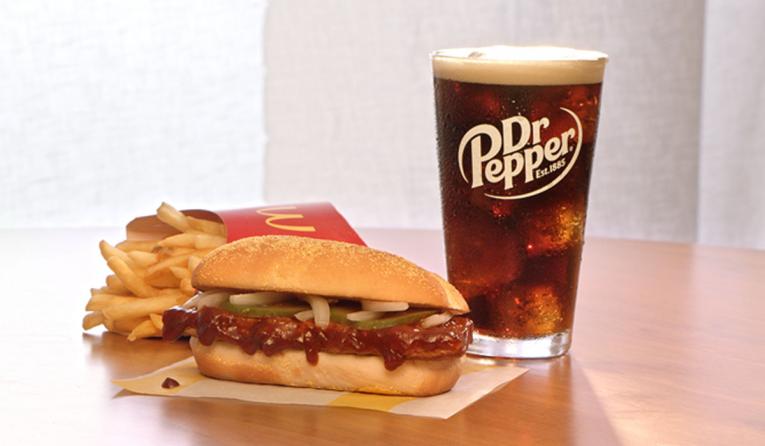 McDonald's brought back the McRib in October to 10,000-plus restaurants.

McDonald’s McD Tech Labs, fueled by its acquisition of Apprente, put a team in Silicon Valley that brings “first-mover advantage in a must-win area for our system,” Easterbrook said, referencing voice technology.

Easterbrook added Apprente brings the promise of more efficient and accurate ordering at the drive thru. Also, it reduces complexity for employees. “Whether we look across the tech or consumer world, we see voice technology playing an increasing role in all our lives. And for McDonald's, this is particularly significant because of the importance of drive thrus to our portfolio,” he said.

“We will see incremental visits as we continue to improve service. … Fundamentally, we are a quick-service restaurant, and our trends had been heading the wrong way for too many years,” he said of drive-thru service times. “And I'm delighted at how much traction we're getting there. [We know] customers will notice 20 seconds, particularly the time-pressed customers—those busy peak hours with us, the breakfast rush or lunch time.”

“Those savings, they don't necessarily notice it on just one visit. But as we consistently run better restaurants, we believe that will obviously put us in a strong competitive position going forward,” Easterbrook added.

McDonald’s U.S. business took a bit of a hit from ending its limited-time 2 for $5 Mix and Match promotion, which ran nationwide. The brand had credited the promotion for driving sales earlier in the year.

The chain followed up with a buy one, get one for $1 offer that focused on core items, like Big Macs, in mid-August that ran a bit pricier for guests. Ozan said the Worldwide Favorites offer in Q2 that carried into Q3 “resonated well.” Also, fresh beef is helping the brand grow burger share.

In McDonald’s International Developmental Licensed Markets, which now represents its largest segment by restaurant counts, comp sales were up 8.1 percent. Each geographic region grew same-store sales and guest counts, with Japan, China and Brazil as the largest contributors to the segment's performance.

McDonald’s franchise margin dollars were $2.5 billion in Q3, growing $150 million for the quarter or a 6 percent increase in constant currencies. It hit operating margin of 44 percent.

This is an important note considering the G&A increase. Ozan said McDonald’s is more efficient on its day-to-day G&A and has lowered the cost in absolute dollars as well as a percent of sales. In 2014, for perspective, G&A was 2.8 percent of sales. This year, it’s about 2.2 percent. “And really, what we're focused on is driving growth and operating margin. And our belief is that we're going to have to spend some money in order to be able to drive operating margin,” Ozan said

In other terms, G&A will go up in 2020 but not to where it will offset growth in margin dollars. Year-to-date, through September, McDonald's has grown restaurant margin dollars about $450 million in constant currency.