Erlinger said the true digital challenge, however, is retaining those customers, and there will be a natural opportunity to do so when McDonald’s loyalty program arrives in the U.S. later this summer. The goal of MyMcDonald’s Rewards centers around creating a platform that elevates the brand, excites customers, and engages crew members. Erlinger said the program has checked all the boxes thus far.

McDonald’s Stays the Course Through COVID’s Ups and Downs

McDonald’s to Roll Out New Chicken Sandwiches in February

Out of Crisis, a New Day Dawns for McDonald’s

In tests markets Phoenix and New England, user adoption—as measured by guests ordering through the app—has increased significantly since tests started. Frequency has also risen; loyalty customers are far more likely to return in the next 30 days compared to non-loyalty consumers. Customer satisfaction is growing because guests enjoy the personalized experience of being greeted by their first name, Erlinger explained.

McDonald’s received “overwhelmingly” positive feedback from team members, as well. Erlinger said employees not only appreciate how the program is set up, but also the fact that they were trained using digital simulations.

“Of course as in any test, we’ve captured many leanings around training, operations, and deployment that will help us maximize the impact when we launch this nationally,” Erlinger said during the chain’s Q1 earnings call. “ … When you think about the impact this can have on the U.S. business, where 85-plus percent of the U.S. population actually comes to McDonald’s at least one time a year, if loyalty can build frequency given the base that we have of customers in the U.S., this is just a tremendous unlock for us.”

McDonald’s has spent the past couple of years globalizing its tech stack to facilitate a large-scale rollout of MyMcDonald’s Rewards. France, China, and other markets are already using the program, and it will also be launched in Germany and Canada later this year alongside the U.S. The burger chain isn’t ready to quantify the program’s impact just yet, but McDonald’s CEO Chris Kempczinski assured the company wouldn’t be moving forward on a global scale if it didn’t think there would be an incremental benefit.

In terms of the operational impact, the loyalty program is having a modest effect on the drive-thru. Order taking times are slightly up, but there will be benefits in the cash taking times. Kempczinski promised McDonald’s will have solutions in place to speed up the identification of customers at the order point.

“We’re not there yet, but I think it’s safe to say that we’ve got a number of ideas on how we’re going to be able to make that happen, and that’s part of our rollout plan over the next couple years,” Kempczinski said. “I think you can safely expect that we’re going to get a solution. It may not be the same solution everywhere, but we’ll have solutions in place.” 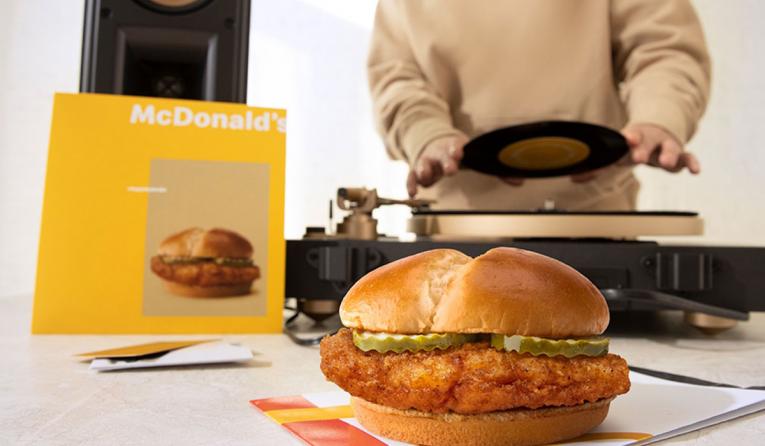 Domestic comps growth benefited from an increase in average check and strong menu offerings, including the launch of McDonald’s new crispy chicken sandwich lineup in February.

So far, the product is exceeding projections. The chain is selling “substantially” more chicken sandwiches compared to its previous chicken sandwich line, and seeing strong unit movement, particularly after 4 p.m. Erlinger explained that whenever McDonald’s unveils a product, there’s a launch period and then a decay curve. Two months in, the decay curve for the sandwiches is dramatically different than what the chain saw in past years.

“I feel very confident about this chicken sandwich," Erlinger said. "I absolutely acknowledge that we’ve had many ins and outs of chicken sandwiches over the years, but I think we did our research. We really grounded ourselves in the consumer on this one in a very significant way. I also think we’ve done a good job of tapping more significantly into trends with our spicy offering as part of the chicken line. And I think our increasing focus on multi-cultural youth is also contributing to our success.”

Adding to Erlinger’s view, Kempczinski said McDonald’s uses the chicken platform with a holistic approach and won’t hang its hat on just one item. For example, the release of Spicy McNuggets ran in front of the chicken sandwich. The CEO said this means  “using everything in our arsenal to drive chicken”— something the brand didn’t do as well on previous occasions.

READ MORE: The Chicken Sandwich Wars Will Ignite Again in 2021

Another major difference is alignment with franchisees and the sustained support that comes with it.

“This is not one of those ‘put a bunch of media weight against it in the quarter and then move on to the next thing," Kempczinski said. "I think there’s broad understanding and alignment that this has to be supported over a longer period of time. So certainly from my vantage point, those are two things that give me confidence about what we’re seeing in the U.S.”

McDonald’s U.S. witnessed double-digit same-store sales increases across all of its dayparts, including a morning segment that’s been surging since Q3.

Erlinger said part of the growth is due to McDonald’s historical strength with drive-thru speeds, and the other part comes from menu innovation. The chain pulled All-Day Breakfast in 2020 to improve execution, but it later bolstered the platform with a new McCafé Bakery lineup in October, which included an Apple Fritter, Blueberry Muffin, and Cinnamon Roll.

“We’re acutely focused on this daypart,” Erlinger said. “We believe that certainly as some consumer habits return to pre-pandemic ways of life, that the breakfast daypart will continue to come back and similar in the way that it was a real market share battle pre-pandemic. We think that market share battle will absolutely continue, and we’re ready and prepared for that.” 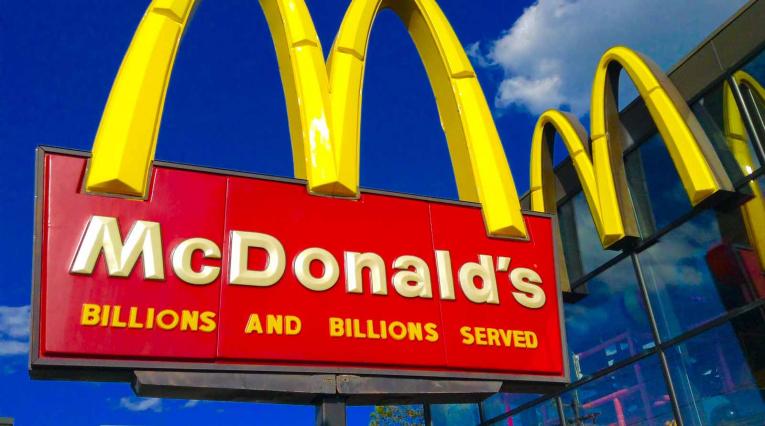 The fast-food chain is working through some changes in corporate stores from a wages and compensation perspective.

McDonald’s and the Labor Crunch

McDonald’s and its franchisees are well aware of the labor crisis that’s hit the industry in recent weeks. One store in Florida was actually offering $50 to individuals who’d come sit down for an interview. It’s reached that point, even for one of the largest fast-food brands in the U.S.

About two weeks ago, U.S. franchisees came together on a system webcast to gather best practices on how to approach the ongoing challenge.

“There was an opportunity for our franchisees to talk to their fellow franchisees about the things that they were doing that are yielding success,” Erlinger said. “That’s always been one of the hallmarks of our system—when we can take a best practice from one restaurant and try to get it to all restaurants. It yields real benefits.”

Erlinger said the chain is faring better in its 656 company-owned restaurants since it has higher crew sizes than the average franchisee. McDonald’s acknowledges it needs to stay ahead of the labor market issue, so it’s working through some changes in corporate stores from a wages and compensation perspective.

Global comp sales increased 7.5 percent in Q1, or 4.1 percent on a two-year basis. International Operated Markets rose 0.6 percent year-over-year, and dropped 6.3 percent on a two-year stack. Results in these areas were driven by strong same-store sales in the U.K., Australia, and Canada, and offset by significantly negative comps in France and Germany.

International Developmental Licensed locations rose 6.4 percent compared to 2020, and increased 2.1 percent on a two-year basis. Comps improved sequentially throughout Q1 and were driven by strong sales in China and Japan.

McDonald’s expects 2021 systemwide sales growth in the mid-teens, and expects net restaurant unit expansion to contribute about 1 percent to 2021 systemwide sales growth. The burger brand is dedicating roughly $1.1 billion to its U.S. business, about $500 million of which will be allocated toward more than 1,200 restaurant modernization projects. Globally, McDonald’s expects to open more than 1,300 restaurants, including nearly 500 in the U.S. and International Operated Markets and more than 800 in International Developmental Licensed Markets.

The U.S. expects to close roughly 325 stores in 2021, a majority of which are low-sales volume units in Walmart locations. Overall, McDonald’s is anticipating a net gain of 650 stores in 2021.