The potential rewards are separated into four different tiers.

Like most loyalty programs, MyMcDonald’s Rewards will allow customers to earn points on each order and use them toward free items. Guests will receive 100 points for every $1 spent on qualifying purchases. Through the end of 2021, every first-time loyalty member will have 1,500 points loaded onto their account after their first order.

McDonald’s said the rewards program is the latest edition of its new “digital experience growth engine,” which includes kiosks, digital menu boards, delivery, drive-thru, and the mobile app. The burger giant earned nearly $1.5 billion in digital sales in Q1. Additionally, roughly 20 million customers are using the app, and delivery has grown to an all-time high in dollars and sales mix.

“We want everyone to feel connected to our brand, which is why we are working to enhance your experience. And we’re not stopping here!” the company said in a statement. “We’re excited for you to experience MyMcDonald’s Rewards, including all of the craveable options you can look forward to as you rack up points once it arrives to a city near you. And stay tuned for even more rewards we’re excited to share – big and small – in the weeks to come.”

The potential rewards are separated into four different tiers, ranging from 1,500 to 6,000 points: 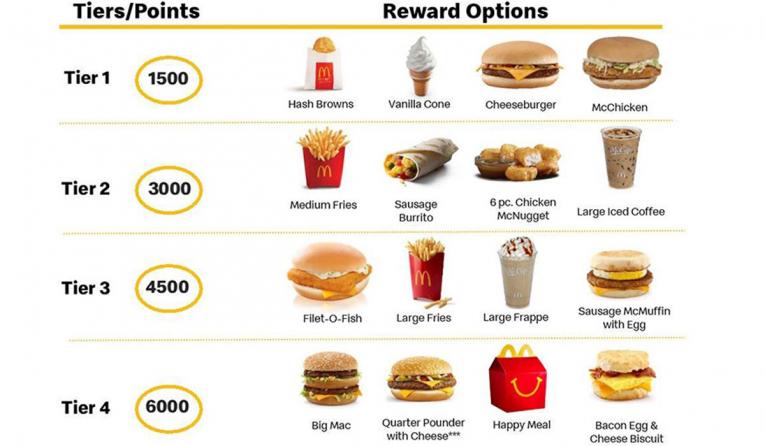 The brand received “overwhelmingly” positive feedback from team members, as well. Erlinger said employees not only appreciate how the program is set up, but also the fact that they were trained using digital simulations.

“Of course as in any test, we’ve captured many leanings around training, operations, and deployment that will help us maximize the impact when we launch this nationally,” Erlinger said during the chain’s Q1 earnings call. “ … When you think about the impact this can have on the U.S. business, where 85-plus percent of the U.S. population actually comes to McDonald’s at least one time a year, if loyalty can build frequency given the base that we have of customers in the U.S., this is just a tremendous unlock for us."

McDonald's is the most recent example of major chains launching loyalty programs to create a better connection with consumers. In February, Burger King announced that it was testing Royal Perks, a rewards membership that allows customers to earn 10 points, or "crowns," for each $1 spent. While McDonald's new program excludes delivery, Burger King's version allows guests to earn and redeem on all delivery orders made via its app and website. Additionally, Burger King's sister brand Popeyes rolled out Popeyes Rewards nationwide on June 17. To celebrate the launch, the brand introduced a special “Welcome To The Popeyes Fam” Meal available exclusively for loyalty members on the Popeyes App or online only, featuring eight pieces of Popeyes signature bone-in chicken, one large side, and four biscuits.