McDonald’s Stays the Course Through COVID’s Ups and Downs

Fast Food | January 29, 2021 | Ben Coley
McDonald's
Domestic comps in January are expected to be in the high-single digits, thanks to the help of stimulus checks.

When reflecting on 2020, McDonald’s CEO Chris Kempczinski is reminded of Ray Kroc, who once noted, “Adversity can strengthen you if you have the will to grind it out.”

In Q4, U.S. same-store sales climbed 5.5 percent at the fast-food giant—the best performance of the year. In an unpredictable environment, domestic locations rebounded from a 0.1 percent uptick in Q1 and an 8.7 percent drop in Q2. Comps rose 4.6 percent in Q3, signaling Q4 would bring more positive news, and it delivered. For the full year, same-store sales rose 0.4 percent, marking the U.S.'s six straight year of positive comps.

“Through all the adversity of the last year, we have seen and done important things that reinforce why we are on the right path,” Kempczinski said during a conference call. “We have seen incredible courage and resilience of our McFamily. We know how to run great restaurants. Our long legacy of execution prowess comes from the talent of our teams, from franchisees to supply chain partners and employees.”

U.S. comps in January are expected to be in the high-single digits, thanks to the help of stimulus checks. Kempczinski also noted McDonald’s saw growth in all of its dayparts, including breakfast.

The morning segment—which grew in Q4— was boosted by new bakery items, which were announced in late October. McDonald’s added an Apple Fritter, Blueberry Muffin, and Cinnamon Roll—the first additions to the McCafé Bakery lineup since 2012. The news came more than six months after the chain pulled back its All-Day Breakfast to focus on speed of service and convenience.

Kempczinski said breakfast persevered so well during the pandemic that even “the introduction of one of our competitors didn’t have a significant impact on our breakfast business.” The CEO was referencing Wendy’s, which rolled out breakfast in March.

“As we look to 2021, our expectations were set up that breakfast for us should be a good performing daypart as people get back to hopefully returning to work and kind of a more regular routine would certainly benefit traffic in the morning,” Kempczinski said.

McDonald’s to Roll Out New Chicken Sandwiches in February

Out of Crisis, a New Day Dawns for McDonald’s

McDonald’s earned more than $10 billion in digital sales in 2020 across its top six markets—good for nearly 20 percent of systemwide sales. The company and franchisees invested $1 billion in technology and digital initiatives to aid expanding sales. Several markets, such as the U.S., Australia, and Canada, doubled delivery mix in the past year. Additionally, McDonald’s new digital growth engine, “MyMcDonald’s,” remains on track to roll out to the top six markets by the end of 2021, including a U.S. loyalty program launch.

The brand’s other difference maker was drive thru, which has improved by roughly 30 seconds in the past two years in major markets, McDonald's said.

CFO Kevin Ozan added the reduction is the result of multiple factors. One is menu simplification—like the removal of All-Day Breakfast—and a focus on “non-sexy” operational shifts such as staffing, positioning of workers, and technology inputs.

“There continues to be a big focus on drive-thru operations, especially because we've seen drive-thru continue to be a bigger percentage of our business,” Ozan said. “There's still opportunity to continue reducing those service times. So, I wouldn't say that we are now at kind of the top level of what we can achieve. There is still a big focus around the company on continuing to improve those service times.”

Much of McDonald’s recovery was fueled by $200 million in incremental marketing support. That investment went toward national promotions like the buy-one-get-one $1 McRib, the new bakery line, and partnerships with musical artists Travis Scott and J Balvin.

Kempczinski said as business continues to grow “at a pretty nice clip in 2021,” there will be a benefit to marketing, but not at the level of $200 million. But momentum is on McDonald’s side now, and that will ultimately add to the pot.

“Part of why we put the $200 million in 2020 was to make sure that we could generate some strong momentum coming out of this,” Kempczinski said. “And when you've got that momentum, you get an out-sized effect from what would be even a normalized marketing level. So that's the bet that we're making and why we're confident on the back half of the year.” 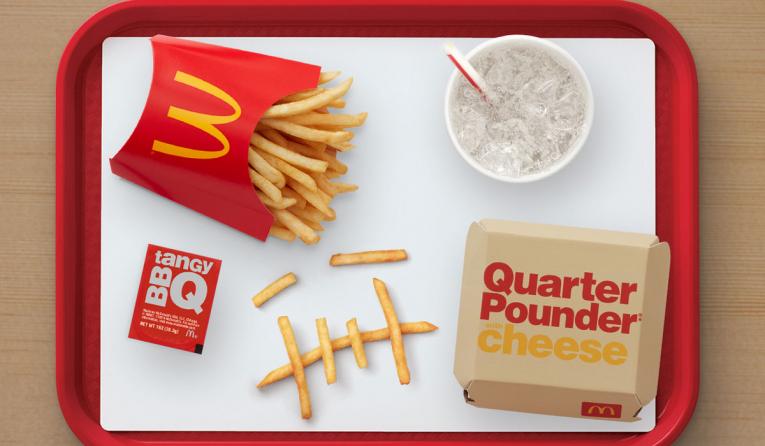 Comps were positive in October, but moved back to negative in November and December because of rising COVID cases and additional restrictions internationally.

Growth in markets like Australia and the U.K. were more than offset by double-digit falls in France, Germany, Italy, and Spain. There were bright spots, however—Japan and Australia posted their fifth and seventh straight year of positive same-store sales, respectively. Comp sales in International Operated Markets are expected to remain in the low double digits as government restrictions remain in place in most markets.

Stores outside the U.S. have hurt more because they tend to rely on dine-in business. Kempczinski said McDonald’s had success driving customers to drive-thru, delivery, and digital, but that’s been limited by operating hour restrictions. Dealing with mandates has been a challenge, but the CEO said international operators are set up well to succeed. In managing COVID restrictions, McDonald’s discovered just how much capacity it can handle in the drive-thru.

“We think in the last year we've moved something like 300 million additional cars through our drive-thrus,” Kempczinski said. “And if you had asked me a few years ago, I was thinking that we were pretty, pretty maxed out on drive-thrus.”

McDonald’s invested $1.6 billion in capital expenditures in 2020 to open almost 1,000 restaurants across the globe and modernize 900 U.S. stores. In 2021, the brand plans to spend roughly $2.3 billion in capital. Half of it will be used to debut more than 1,300 restaurants globally—roughly 500 in the U.S. and International Operated Markets and more than 800 in International Developmental Licensed Markets, including 500 in China.

The other half of the $2.3 billion will be reinvested in U.S. and International Operated Markets. About $500 million will be used to modernize approximately 1,200 U.S. stores. More than 90 percent of U.S. modernization projects are expected to be completed by the end of 2021.

The stellar performance of franchisees comes amid what appears to be a feud between the company and operators. Franchisees have voiced displeasure over McDonald’s asking for higher fees and ending a subsidy for Happy Meals, according to CNBC. The operators stopped nonessential communication and plan to resist future value promotions, per the report.

Kempczinski, who ran the U.S. market for three years, cautioned onlookers to not generalize the overall sentiment of franchisees because “you have 2,000 CEOs and presidents of their own businesses with a lot of different opinions and perspective.”

He added McDonald’s business is very decentralized, meaning the action happens at the restaurant level. And at that level, Kempczinski said the U.S. interaction between company and franchisees is strong, pointing toward the operating and sales performance as evidence.

“There is absolutely noise and there absolutely are some disagreements that happen right now between the national operator leadership and our U.S. team,” Kempczinski said. “I've dealt with those when I was in the U.S. They flare up from time-to-time. We're certainly in one of those moments now. But I'm confident that Joe Erlinger and the U.S. team along with Mark Salebra, who leads the operator group at the national level. We always find our way to work through these, and I fully expect that that will be the case in the U.S.”

Kempczinski also acknowledged the debate around a potential federal $15 minimum wage requirement. The CEO said while talk at the federal level has picked up steam, he noted it’s happened at the state level for the past several years, including Florida, which recently passed the measure during the 2020 general election.

As those higher costs rolled into certain states, Kempczinksi said McDonald’s has “seen and developed quite a bit of experience with how this works out.” As long as the minimum wage requirements are launched in a staged manner and done equitably across the market, McDonald’s has been fine. Kempczinski added that in those areas, the chain balanced pricing on the menu and productivity savings.

Another example that gives him confidence is the brand’s work after seeing minimum wage increases in Canada.

“That team working with the franchisees did a spectacular job of working that through on to the menu through pricing, through productivity,” Kempczinski said. “So, I think our view is the minimum wage is most likely going to be increasing, whether that's federally or at the state level as I referenced. And so long as it's done, like I said, in a staged way and in a way that is equitable for everybody, McDonald's will do just fine through that.”

BTIG is anticipating McDonald's will roll out Apprente, it's voice ordering platform, in the drive-thru sometimes this year to reduce labor hours. It also believes franchisees will raise menu prices in excess of the usual 2.5 to 3 percent annual increase.