Third-party delivery sales have lifted nearly 50 percent in the past 12 months.

Two and a half years ago, Papa John’s made the call to solidify a third-party national partnership with DoorDash to bolster its delivery capabilities.

It was a period in which the pizza concept’s same-store sales fell in the mid-single digits, year-over-year, as it reeled from the public fallout of founder John Schnatter's exit from the brand.

Lynch, though, always believed in the power of third parties, even before the pandemic.

“The customers have spoken. These apps are growing really rapidly because the customers want these services,” the CEO told CNBC two years ago. “So, yes, they have had an impact on our industry, an impact on our business. But we believe that’s because we haven’t worked strategically with them. We don’t think it needs to be that way.”

Since then, the company integrated with the likes of Grubhub, Postmates, and Uber Eats, and increased its digital mix from 60 to 70 percent. While Papa John’s doubled down on this path, competitors haven't, specifically Domino’s, which even rolled out a promotion denouncing third-party delivery aggregator’s surprise fees by giving away free items to delivery customers.

READ MORE: Why COVID Will Catapult Papa John’s Across the Globe

Papa John’s, however, has consistently found third-party delivery provides an incremental contribution to strong same-store sales and industry outperformance, Lynch said. In Q3, comps lifted 6.9 percent in North America, or a two-year stack of 30.7 percent. The numbers are significantly higher than the performance of Pizza Hut (plus 8 percent over two years) and Domino’s (plus 15.6 percent over two years).

Last year at this time, Lynch told analysts sales through delivery aggregators grew by a factor of over three times, with the mix lifting from 2 to 6 percent. In August, Papa John’s revealed domestic sales through third-party delivery channels lifted nearly 50 percent in the past 12 months. The CEO said Papa John’s saw the business become “very incremental” and “very profitable.”

It’s about a 2:1 ratio between sales from the third-party marketplace and outsourced delivery via the app, according to Lynch.

“Others chose not to go down that path, and it's definitely helped us during these challenging times,” Lynch said during the brand’s Q3 earnings call.

The benefit is showing up in multiple areas. For one, third-party delivery allows the brand to take advantage of new customers coming through each of the aggregators’ websites.

The best evidence of this growth is the acceleration of Papa Rewards loyalty members, a group that’s surged from 12 million in 2019 to more than 22 million this year. Lynch said rewards customers are “significantly” more profitable than non-loyalty consumers because Papa John’s is able to use targeted, personalized offers that drive frequency, higher average ticket, and better satisfaction.

The chain continued to draw these new customers into the loyalty program with multiple rounds of innovation, including Epic Stuffed Crust, Papadias, Jalapeño Popper Rolls, BaconMania, and Shaq-a-Roni Pizza.

Lynch noted much of Papa John’s transaction growth over the past two years came from new consumers as opposed to increased frequency of current guests.

“Our partnerships with aggregators bring additional customers to the brand, driving incremental and profitable transactions for us and our partners,” Lynch said. 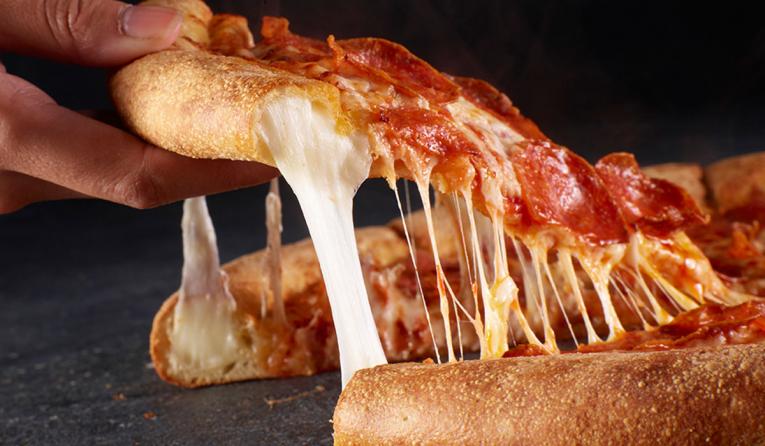 Despite headwinds with labor and supply chain, Papa John’s has continued to open restaurants at a brisk pace.

The help of those extra drivers prevented stores from closing early in the third quarter, and kept restaurants from turning off ordering mechanisms. Lynch previously explained drivers are Papa John’s No. 1 bottleneck and adding a significant number of drivers through models like DoorDash helps the chain manage labor and throughput.

“Obviously that allows us to deliver greater sales when we're not shutting things down,” Lynch said.

Similar to many in the industry, staffing shortages proved to be a challenge for the pizza chain. During the quarter, Papa John’s hosted a National Hiring Week in which the company and franchisees held more than 800 recruiting events in more than 60 markets. The chain hoped to add more than 20,000 new employees for full-time and part-time roles, including pizza makers, delivery drivers, shift leaders, managers, and more.

Lynch said Papa John’s is understaffed relative to last year, but added employees have “picked up the slack” and that general managers are “working harder than they ever have.” He emphasized workers are inspired to do so because of the improved working conditions the company implemented in the past couple of years.

“The foodservice business is always struggling and working to find people to come in and that's not a new dynamic,” he said. “Obviously, this is exacerbated at this point, but our people have just really taken it to heart and have done a great job managing through it.”

Despite headwinds with labor and supply chain, Papa John’s has continued to open restaurants at a brisk pace. The chain opened 46 net new locations in Q3, including 32 internationally and 14 in North America. Year-to-date, the brand has added 169 net new units. It expects to finish the year with 220 to 260 net new stores, which would represent year-over-year growth of 4.5 to 5 percent.

Future expansion is backed by large agreements. Papa John’s struck a deal with PJ Western Group to open 250 restaurants in Germany, and inked an agreement with Drake Food Service International to open more than 220 units in Latin America, Spain, Portugal, and the U.K. Then in September, Sun Holdings agreed to debut 100 stores across Texas through 2029, the largest domestic deal in Papa John’s history.

The brand finished the third quarter with 5,569 outlets systemwide, including 3,323 in North America and 2,246 internationally.

“We are very bullish in our ability to continue to deliver these large development agreements,” Lynch said. “I think we've consistently said that we have evolved our development strategy, both domestically and globally, away from opening up any store that anyone is willing to build to a much more strategic approach around bringing in new franchisees that are well-capitalized, have operational experience.”

“Sun Holdings is the first one and frankly, it's a great one,” he added. “But we are currently in discussions with both new and current franchisees on big development agreements, and we'll continue to announce those as they come to pass.”