Yum! Brands punctuated its three-year transformation with some impressive metrics across the board. It generated more than $50 billion in system sales in 2019 and finished the fiscal calendar with 50,000-plus restaurants across 2,000 franchisees (Yum! is now 98 percent franchised). Same-store sales growth of 3 percent and net-new unit growth of 4 percent met long-term targets.

Yum! said in 2016 it would like to hit 7 percent system sales expansion—it reached 9 percent. It brought 2,040 net units to market this past year alone, including 1,029 restaurants in Q4.

But there are some near-term hurdles facing Yum! as it moves forward as a more focused, franchised, and efficient business than it began the transformation as.

Yum China Holdings, a separate company that pays royalties to Yum! Brands, said earlier this week more than 30 percent of its 8,790 restaurants in China are currently closed. At open ones, the news is rough, too. Same-store sales have fallen 40–50 percent since the Lunar New Year holiday ended. Even with delivery active, it’s doing little to offset the fact many customers are electing to stay home. As of Thursday, authorities in China confirmed 28,019 cases of the virus and 563 deaths.

Yum! CEO David Gibbs said the impact would “certainty be a headwind for 2020,” but, due to the company’s diversified nature, it likely won’t be as much of a financial drag as it will be for some other brands. Starbucks and McDonald’s have shuttered stores temporarily as well. China accounted for 27 percent of KFC’s total sales in Q4 and 17 percent at Pizza Hut. Gibbs said one point of same-store sales growth in China for a full year translates to 19 basis points of comp growth for Yum!, and translates to $2.9 million in operating profit. So that offers some estimate of the potential hit, although the situation remains dynamic.

Turning back to Pizza Hut, the chain continues to lag Yum!’s other banner brands. And that’s unlikely to change in 2020 as it works through asset changes to build a more carryout, delivery friendly fleet of restaurants. There’s also some franchisee attrition taking place, the company said.

The story for Pizza Hut is going to have many layers in 2020. Yet perhaps none more tangible than its actual store count. Yum! previously said the brand could drop to as low as 7,000 U.S. locations. So, despite shuttering 136 restaurants in Q4, there is still plenty of work to be done, as the company has hinted in recent quarters.

Here’s a look at how Pizza Hut’s footprint has evolved this past year.

As Pizza Hut’s evolution continues—a challenge born out of the rising gap in the chain’s dine-in and off-premises business—the brand will have new leadership at the helm.

Gibbs announced on the call that Kevin Hochman, KFC’s U.S. president, is stepping into the same role (with interim standing) at Pizza Hut U.S. 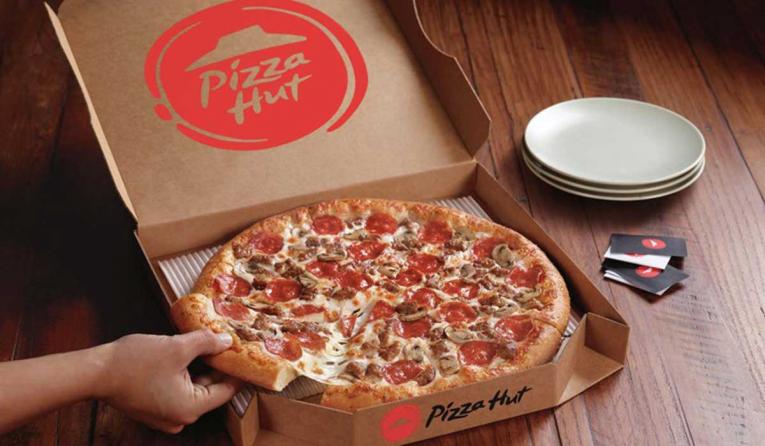 Hochman will support Artie Starrs, who was promoted from the U.S. president position to CEO in August, and still helm his KFC duties.

Chris Turner, Yum!’s CFO, said Hochman “really architected the turnaround” at KFC by “going back to the things that we know matter in our industry, having brand communications that resonate with consumers.”

Hochman clocked 19 years at Procter & Gamble before joining KFC in 2014. He was CMO leading up to his president promotion in 2017, succeeding Jason Marker. Hochman helped direct the “Re- Colonelization” campaign central to KFC’s comeback. “Kevin's turnaround experience in both CPG [at P&G] and KFC US and his proven ability to improve distinctiveness of brands and accelerate innovation make him ideally suited for this opportunity,” Gibbs said.

“It's obviously too soon to start to talk about the specific tactics that he's going to deploy. But I can say, quite a lot of franchisees reach out to me and say they are excited to have Kevin joining,” Turner said.

Pizza Hut experienced an uptick in bad debt expense in Q4. Bad debt expense related to royalties and digital fees was $8 million for the global division, up $4 million year-over-year. For the full year, it was $22 million, an increase of $12 million.

Turner said this was related “to just a handful of franchisee situations.” This is something Yum! brought up last report as it mentioned there being some overleveraged operators in the system. Some who “simply aren’t the right operating partner for us to grow this brand,” former CEO Greg Creed, who retired at year’s end, previously said.

Turner noted Thursday there was potential for sales softness in the near-term primarily related to its “largest franchisee.” When asked to elaborate by analyst David Tarantino, Turner said Yum! typically does not go into detail on specific franchisee situations. He said the majority of the brand’s operators “are really good partners.”

“They are well capitalized, committed and capable, and continue to drive the business in the right direction,” Turner said. “We do have a handful of situations where we are working with the franchisees to get them into a better place. Obviously, each of those processes take time and do create some choppiness. As a result, as an example, we do have one market in the U.S. where we have a franchisee whose assets simply weren't up to our standard.”

Yum! worked with them, it said, to exit the party from the system, and is making progress on getting a new franchise operator in place.

This provides a bit of glimpse into the lofty test ahead for Yum! and Pizza Hut as its tries to modernize one of the country’s largest legacy brands. 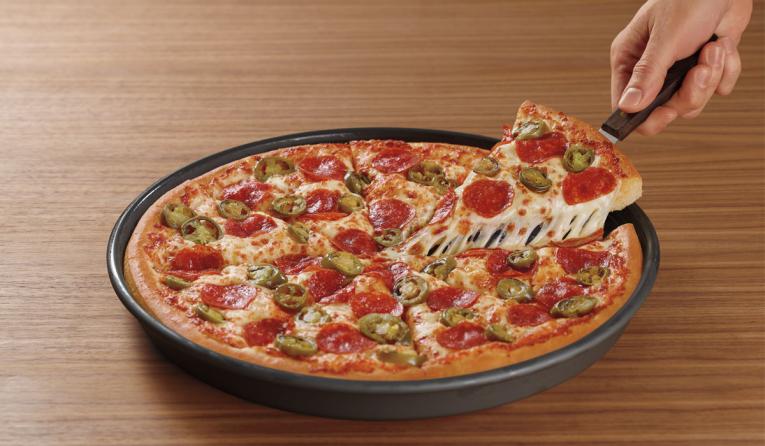 Pizza Hut has made strides with food quality and service improvements, but has a ways to go with its asset base.

“Pizza Hut US continues to be a business in transition, and for the last three years we've made improvements in food quality, speed of service, our loyalty program, and upgrading our technology for online ordering and delivery,” Gibbs said.

However, three goals remain: more consistent execution in its customer experience across delivery and carryout, Gibbs said; ensuring there are value promotions that resonate with consumers and are consistent with the long-term profitable unit economic model; and lastly, remodeling and relocating the asset base—the headliner for some time now.

“We are urgently taking steps to change the trend and are working internally with our franchisees to place the brand on firmer footing to grow,” Gibbs said.

He said many of Pizza Hut’s U.S. assets are “below our standards and need to close.” When Yum! first outlined this retraction, it said it hoped to reopen locations in as many trade areas as possible. Creed said in Q2 the economics of building a modern delivery asset “work quite well for Pizza Hut,” meaning, in theory, any spot where a store closes, there should be an opportunity to rebuild in that market or nearby. Gibbs also said some older boxes were erected in spots that made sense 30 or 40 years ago. Today, they just don’t work for delivery.

It’s a simple concept but very difficult and deliberate to get through. Take dine-in restaurants that once were built to satisfy a dine-in market, and move them to trade areas that fit off-premises-minded customers, which is where the profitable model lies for Yum! today.

In the end, a Pizza Hut base with more upside thanks to less costs, especially on the labor front, better system sales, franchisee economics (and thus, room to grow) and an image reflective of a modern chain instead of an aging one—that’s the long-term plan.

Today about 90 percent of Pizza Hut’s business is either takeout or delivery. But midway through the year, there were north of 6,000 traditional units and just 1,350 express locations. Half of that first pool were dine-in venues.

Again, there’s a lot of ground left to make up for Pizza Hut. Nearly nine out of every 10 new builds today are designed as “Delco” models—smaller, more efficient concepts that focus on off-premises and have a lower startup cost.

A current issue, however, is that some of Yum!’s franchisees, according to the company, are saddled with debt that makes it hard to relocate restaurants. It’s leading the brand to “get the stores in the hands of the right partners that are well capitalized to grow and build this business,” as Creed said. Working through a select group of operators that have too much debt on their business to make the transition Yum! believes Pizza Hut needs to make.

“As far as franchisees go, obviously nobody's happy seeing same-store sales growth negative,” Turner said. “And I think they’re excited about Kevin joining, as I mentioned, earlier. … I think they're working constructively together as we continue this turnaround of the Pizza Hut US business, which we mentioned repeatedly is something that we're not counting on a dramatic change in the business in the short-term, but we're proud of the work we're doing to build a stronger business in the long-term.” 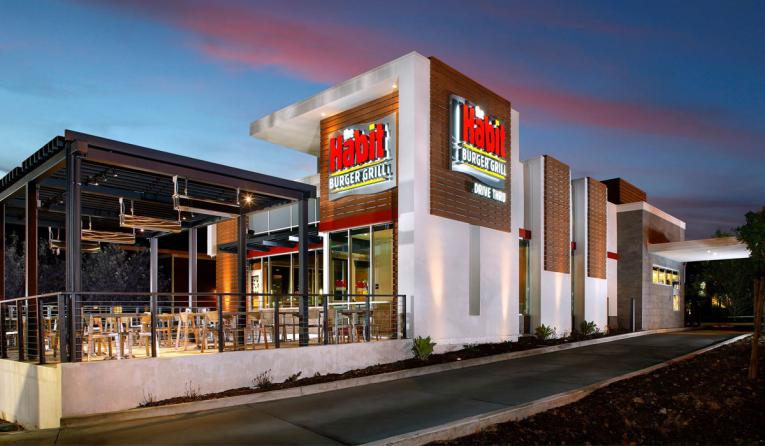 The Habit sale, Taco Bell speeds it up, and KFC keeps growing

It’s still too early for Yum! to comment with any real detail on its $375 million acquisition of The Habit Restaurants, announced in January. It’s expected to close by the end of Q2.

Turner did say Yum! is excited about the risk-reward proposition. It’s a small investment relative to Yum!’s vast portfolio, “but we're buying something that has a lot of growth potential. As you know, we're all about growth. We're not interested in buying big businesses that are of the same skill of ours, that don't have a lot of growth. We want to buy something we're looking for the upside that comes with that growth,” he said.

“We think, given our scale and our capabilities, they match up with Habit very well, and we should be able to unlock growth, give our franchisees a great new growth vehicle in the U.S.,” Turner added. “Given our ability to take things in our international markets, I'll take this brand outside the U.S. in a bigger way than they have already.

Taco Bell delivered another strong quarter, adding 172 net new units. It opened its 60th urban-style Cantina in the U.S. and debuted 71 net international restaurants in the period, including new markets in Portugal and New Zealand. Taco Bell’s global development of 291 net stores in 2019 was a 30 percent increase over 2018.

Turner said the brand ended the period with 20 seconds faster service, year-over-year. That translated to 9 million more cars rolling through the drive thru in 2019.