There are 1,650 restaurants currently in the pipeline.

Papa John’s CEO Rob Lynch and franchisees have moved past the honeymoon stage, he said.

It’s one of the best collaborations he’s been a part of, and the former president of Arby's has experienced some good ones. The relationship strengthened during the pandemic, when Papa John’s partnered with operators to work through challenges they had never encountered. COVID brought the system together to the point that corporate and franchisee representatives don’t waste time on one-off pursuits. The two sides talk strategy about high-level objectives, and they’re working together to move forward.

It’s easy to understand why franchisees have so much optimism. Same-store sales increased 26.2 percent in North America in Q1, and 31.5 percent on a two-year basis. International markets skyrocketed 23.2 percent. Additionally, 80 new restaurants opened in the quarter—the chain’s best Q1 in 20 years—and only three stores closed in North America, the lowest amount this century, Lynch said. Papa John’s is also expanding globally. The brand is now in 50 countries and territories after opening its first units in Germany and Cambodia.

This year, Papa John’s anticipates a net opening of 140 to 180 stores.

“It takes a long time to build trust and a short time to lose it, so I’m not saying we’re still not focused on that type of relationship, but I would tell you that the franchisees are bought into our plans,” Lynch said during the brand’s Q1 earnings call. “Their units are generating more revenue and more cash flow than they ever have—that helps. And they deserve it because they’ve made it through some really tough times a couple of years ago.”

THE COVID-19 ROAD FOR PAPA JOHN'S SO FAR

Why Papa John’s Was 2020’s Most Transformational Brand

Papa John's to Provide $2.5 Million in Bonuses for Front-Line Employees

At Papa John’s, the Comeback is Just Beginning

Papa John’s ended Q1 with 5,468 units globally, or a 1.3 percent increase year-over-year. That figure includes 3,298 in North America and 2,170 internationally. Those numbers are only expected to go up. As of March 28, Papa John’s development pipeline included roughly 1,650 restaurants, or 250 in North America and 1,400 internationally. A majority of those stores are scheduled to open over the next six years.

Lynch said the development team is currently meeting with almost every one of the top 25 franchisees, with discussions centered around the markets they are in and where the opportunities reside. The pipeline, as big as it is, doesn’t even reflect those conversations. Since Lynch has been at Papa John’s, he’s never seen more excitement than he does now, he said, in regard to the opportunity that still exists in North America.

And when it comes to international growth, there’s a lot of interest coming from the runway.

“We’re in 50 countries. Our competitors are in 100 countries,” Lynch said. “So we have a huge amount of whitespace, and we’re entering in discussions with really sophisticated, large-scale restaurant franchisees in geographies that we don’t currently compete in to build out those countries. So we’re very bullish that that pipeline will grow over the next 12 to 18 months in a significant way.”

Lynch believes continental Europe is a major opportunity for the company. The U.K. is Papa John’s best market right now—it had the highest comps last year and has the highest comps this year. And yet, Papa John’s still sees a significant amount of development potential. Lynch thinks the brand could easily double its U.K. footprint. 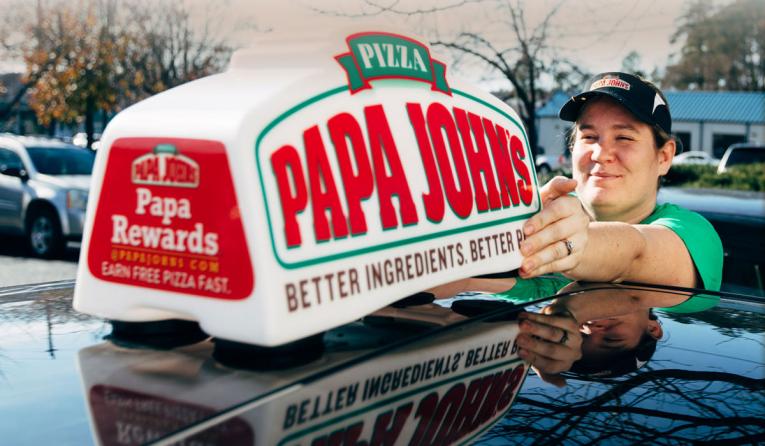 Papa John’s doesn’t have any stores in Australia or Brazil—big markets that can hold 200 to 250 locations, CEO Rob Lynch said.

Outside the U.K., Spain, and restaurants in Luxembourg, there’s opportunity in France and Italy—big geographies that Papa John’s hasn’t tapped into yet. The three units that have opened in Germany are run by a franchisee that built out Russia, which gives Lynch much confidence. Papa John’s growth in Germany will allow it to enter more countries with current franchisees or bring in new franchisees that are already operating restaurants in those countries.

Beyond Europe, Papa John’s doesn’t have any stores in Australia or Brazil—big markets that can hold 200 to 250 locations, Lynch said. There’s also only 200 units in China, and the CEO believes that could rise to 1,000.

A significant factor to this growth is the notion many international operators are no longer pushing to open restaurants with big dining rooms.

“Now, in almost every market, our franchisees are opening delco [delivery/carryout] units almost exclusively,” Lynch said. “And what that’s going to do is it’s going to reduce the amount of capital necessary to open new stores. And so we are more bullish today than ever on the rate of development internationally, especially in the markets that used to really focus on those dine-in units. Moving to a delco model, they can open a lot more restaurants for the same amount of capital, and that’s going to benefit everybody.”

Lynch said going forward, the company will have a more stable growth rate. Papa John’s is leveraging site selection technology to increase the likelihood of profitability and lower the amount of closures. This means the chain won’t require as many openings to deliver the same level of net new unit growth. There’s no cap in terms of what Papa John’s thinks it can reach annually—it’s more about working with franchisees to find real estate and building a model that’s sustainable. Ideally, 80 percent of units will come from existing franchisees.

Papa John’s isn’t sitting back, either. The brand plans to open 20 to 30 company-run stores in the coming year to build a growth path that franchisees can follow. The chain is looking at  highly penetrated markets like Atlanta, Louisville, St. Louis, and Orlando. Papa John’s wants to fill gaps where drive times are longer and the number of households exceeds the optimized number. Lynch said the next three restaurants are forecasted to be above the average AUV.

“We’re not going in and looking at just popping in restaurants that might or might not succeed. We are going in and building restaurants that can improve our customer service, but also generate profitable returns right out of the gate,” Lynch said. “And by doing that, we’re going to leverage that data and that model to help supplement the conversations we’re already having with our franchisees around building out their markets in a similar way."

“ … Once we build that model, is there an opportunity for us to refranchise company restaurants and get to more of a franchised model domestically?” he continued. "That’s definitely a possibility. We’re continuing to leverage the optionality we have with our company restaurants when it makes sense for us to seed franchisees who want to come in and develop.”