The classic burger chain is boosting sales and creating jobs thanks to 'scrape and rebuilds.'
Fast Food | January 2019 | Danny Klein

Roughly 50 percent of third-party delivery sales occurred after 10 p.m., and 75 percent took place after 4 p.m. this past year at Krystal.

Chief executive Paul Macaluso had a goal for Krystal: Get people talking about the legacy brand again. There wasn't one easy fix to laser on, though, for the ex-McAlister’s president, who joined 87-year-old Krystal in April. To start, the legacy brand launched an unconventional, digital- and social-focused advertising campaign, “Live A Little,” in June powered by The Tombras Group—the company famous for its social media work with MoonPie. It was directed by newly minted CMO Dominic Losacco, formerly SVP of Moe Southwest Grill, and aimed to reinvigorate “the venerable burger brand with an appeal to millennials and a nod to pop culture.” For one example, this video below had nearly 7 million views on YouTube.

Krystal opened its first “Iconic Series” prototype restaurant, named after its classic burger and new abstract emblem, in Jackson, Mississippi, in August. It was followed by restaurants in Tifton, Georgia; Tuscaloosa, Alabama; and Memphis and Chattanooga, Tennessee. The first Atlanta prototype stores (Krystal’s restaurant support center is based there) are scheduled for early February. The models are smaller with expanded work zones and feature double drive-thru lanes. Architecturally, the buildings present contemporary and nostalgic, with full-glass fronts and wood-framed open ceilings, and community tables in the dining rooms. And, yes, they’re square like Krystal’s iconic burgers. 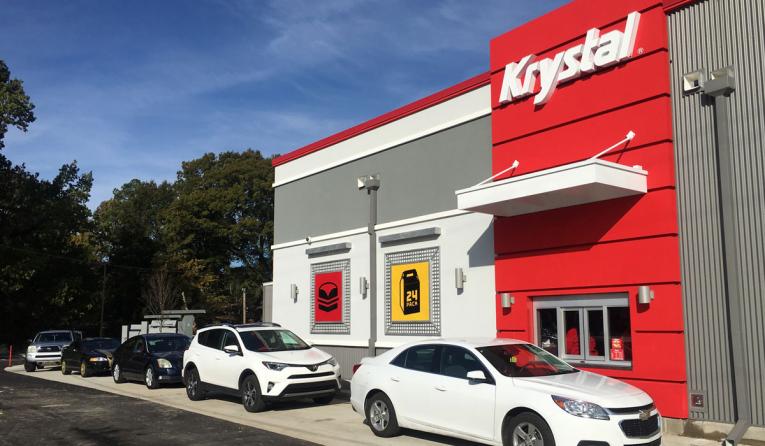 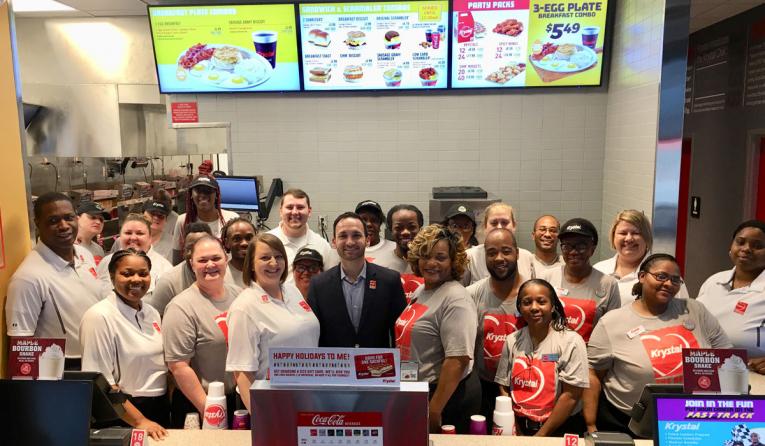 The company, whose sales dropped more than 6 percent in the previous two years, revealed some early results January 22.

Razed and redesigned stores, or “scrape and rebuilds,” in multiple markets, are generating sustained sales-volume lifts of 70–80 percent, the company said. Additionally, they’re seeing average staffing increases of 66 percent as Krystal looks to “improve the dining experience and adapt to changes in consumer behavior.”

“The impact of the redesigned stores has exceeded our expectations. Customers love the streamlined, efficient drive-thru and the fresh look and feel of the new restaurants, which are also a magnet for recruiting and energizing employees," Macaluso said in a statement.

Increased sales have necessitated additional labor. Staffing is up, on average, from 30 to 50 employees at each of the five prototype stores. Updated kitchens and facility layouts are contributing to consistently higher overall stratification (OSAT) scores, Krystal said.

Moving forward, the brand expects to redesign 75–100 restaurants over the next five years, representing about 40 percent of its corporate portfolio.

Another big trend: Third-party delivery is emerging as a key sales driver, Krystal said, particularly for dinner and late-night dayparts. Krystal grew its third-party delivery business from 2 percent of its restaurants in early 2018 to more than 60 percent by the end of January via Uber Eats, DoorDash, GrubHub, and Waitr. Below is a late-night themed ad that generated about 1.2 million views. 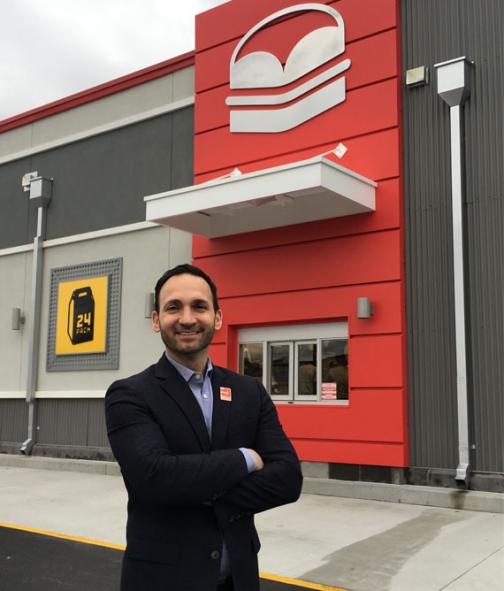 Krystal has more than 350 locations in 11 states.

Macaluso assumed Krystal’s CEO role April 2 after Omar Janjua left to join 179-unit Taco Bueno. He arrived from FOCUS Brands, where he was president of McAlister’s Deli, after a decorated five-year run with the parent company of McAlister’s, Auntie Anne’s, Carvel, Cinnabon, Moe’s Southwest Grill, and Schlotzsky’s. Macaluso, who was promoted to the president spot in December 2016, started as vice president of marketing for Moe’s and worked his way into a position as senior vice president of brand marketing strategy, leading the collective marketing for the company’s six brands. Before that, his 25-year career included stops at YUM! Brands, where he started as a general manager at Taco Bell before rising to management. He then led brand strategy, menu development, and product marketing for Burger King Corporation and Sonic Industries.