The last few years have been rocky at Steak ‘n Shake. After nine consecutive calendars of positive operating earnings, the classic burger brand entered the red from 2018–2020. The underlying issues weren’t elementary and couldn’t be fixed near-term—realities that sent Steak ‘n Shake into an “era of radical transformation,” Sardar Biglari, chairman of the board of parent company Biglari Holdings, told investors in a February 26 letter.

Or, put into plain terms, “Steak ‘n Shake was built in the 20th century on a 20th-century business model,” he said.

Essentially, the brand as built, designed, and run, wasn’t profitable any longer. It boasted a labor-intensive table-service model with outmoded kitchen equipment in its production line, Biglari said. Pre-COVID, labor costs ran at 38.5 percent of net sales for Steak ‘n Shake, a figure that placed it at a 6–8 percentage point disadvantage compared with category peers.

Biglari said the economics of Steak ‘n Shake’s full-service footprint, offering high-quality, low-priced burgers and shakes, “did not work in the modern era.” And the brand’s calling cards—the Steakburger and milkshake—were not getting delivered with fast, hospitable service at a great value.

TAKE A LOOK BACK THROUGH STEAK 'N SHAKE'S TRANSFORMATION

Biglari even shared a quote from Italian Renaissance artist Michelangelo to illustrate his point, and the disconnect. “The sculpture is already complete within the marble block, before I start my work. I just have to chisel away the superfluous material.”

How does this apply to a 1934-founded restaurant chain? Biglari believes Steak ‘n Shake’s operating plan and menu were keeping it in purgatory. Yet the potential was there. In turn, part of the recent “radical transformation” involved cutting “superfluous elements,” from breakfast items to chicken sandwiches to silverware. And most notably, table service.

After 86 years, Steak ‘n Shake eliminated servers and added kiosks to dining rooms. Customers can’t order via the counter. They can use an app or tap the self-service options in-store.

This “sculpting” of a business model, as he put it, required about $50 million in capital expenditures. Through year-end 2021, the company spent $40 million, and expects to deploy another $10 million this year to “remodel the interior of the restaurant, introduce a new point-of-sale system, and install self-order kiosks.”

The capital outlay thus far, per unit, has averaged roughly $160,000. Biglari said Steak ‘n Shake has seen a payoff, but he admitted it would take some time. “Of course, only after a few years can our capital investment be proved warranted,” he said. “Although in 2021 Steak n Shake required capital from its parent company to pay off debt and fund additional capital requirements, we expect the chain to finance all of its business needs internally in 2022, and to resume the distribution of cash to Biglari Holdings later in the year.” 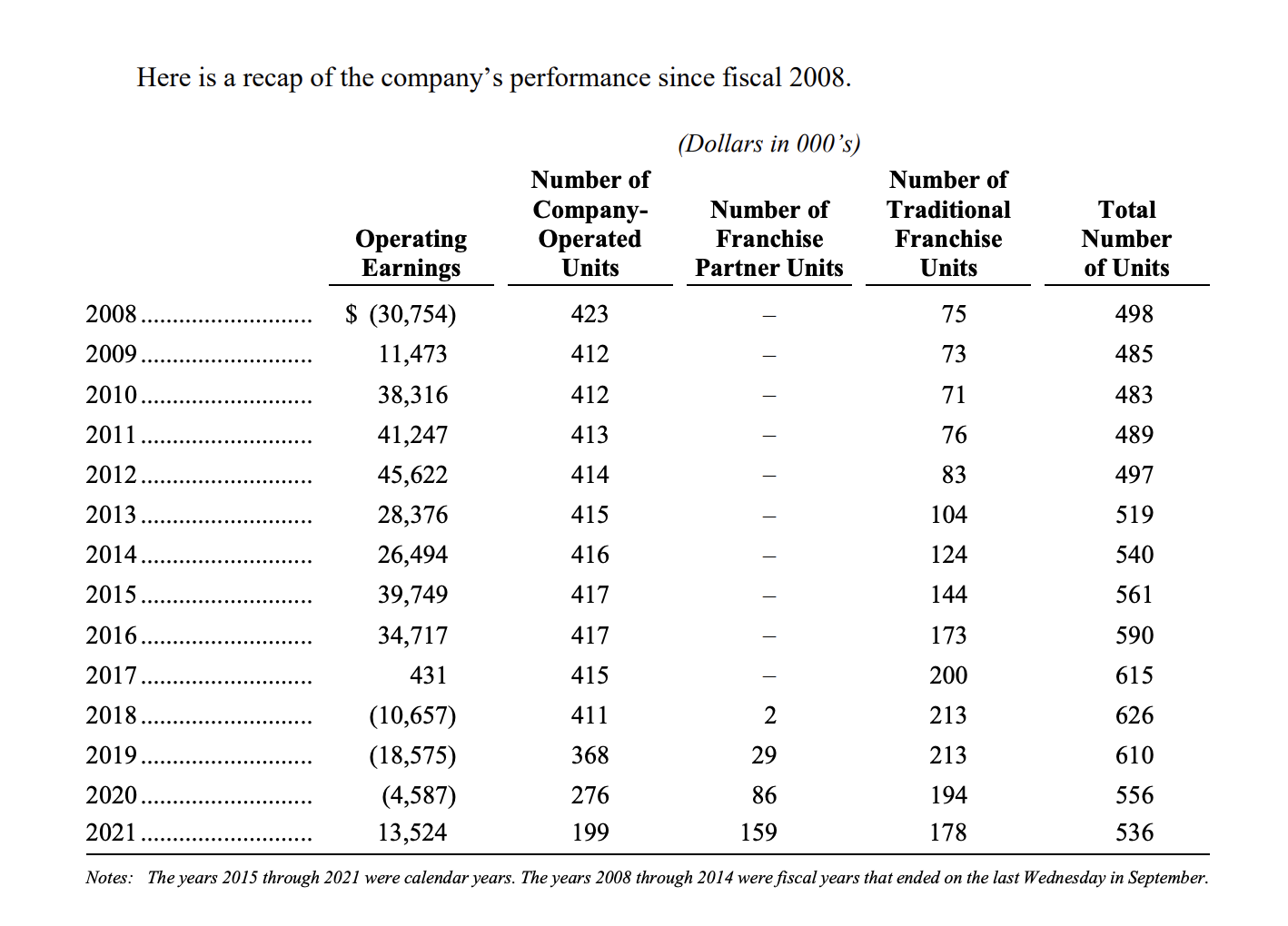 With self-service, Biglari claims Steak ‘n Shake dining rooms have now turned into “walk-throughs,” with economics nearly as robust as that of the chain’s drive-thrus. Under the prior setup, annual sales per employee, measured on a full-time equivalent basis, were about $64,000, he said. Today, it’s nearly $118,000.

And Steak ‘n Shake was able to take these cost savings and pass them along to customers in the form of low prices. Additionally, to employees through higher wages.

Amid all the inflationary conversations and upward trajectory of pricing in general these days, Biglari said Steak ‘n Shake’s philosophy won’t be to maximize profit per customer, but rather to offer products at the lowest possible prices “to stimulate higher aggregate profits from an ever-increasing number of customers.”

The brand’s most-popular item, the original double Steakburger with cheese and a side of fries, sells for $3.99. That’s the same price Steak ‘n Shake charged in 1997. “Although we increased prices recently on most other products, we have generally maintained lower prices than our competitors,” Biglari said.

That shift brought Biglari to the other multi-year “radical” adjustment unfurling throughout Steak ‘n Shake. What he refers to as, “building a culture of ownership at the unit level.”

“For operators to think and act like owners, we believe they must be owners,” he said.

About three years ago, the brand launched its “franchise partnership program,” which set out to foster a system of single-unit operators Biglari believed would be more invested in the business than larger entities. Not unlike the path Chick-fil-A took to 2,500 stores.

But the headliner was the price tag. Franchisees were asked to make an upfront investment of $10,000. Steak ‘n Shake constructs the site, pays for equipment, and then assesses a fee of up to 15 percent of sales as well as 50 percent of profits. Biglari said the brand generates most of its revenue from the profit share.

It wasn’t a ground-up movement, necessarily. The company set out to transition company-operated stores to franchise ownership, often temporarily closing them until an operator could be found. This number had been in the triple-digits at times.

As of December 31, Steak ‘n Shake had 199 company-operated stores, 159 franchise-partner units, and 178 traditional franchises. Of the 199 corporate, 42 are currently closed, “but Steak ‘n Shake intends to refranchise a majority of them,” the company said.

Biglari noted, due to the transition, Steak ‘n Shake would “appear to be a much smaller company than before from a revenue prospective.” Yet not so from a profit one, he added.

For the operator, Biglari said franchisees are able to “earn considerable sums, which is the way we want it.” Over the last two years, the average franchise partner made about $137,000 annually—“more than the average accountant, architect, or engineer in America earned,” he said.

“Doubtless, a good number of our partners will become millionaires. But make no mistake: We are not minting millionaires but are merely providing the means—they are earning every penny,” Biglari continued.

Come 2022, Steak ‘n Shake had converted 159 corporate locations into single-unit franchise partnerships, an increase of 73 from the prior year. The program was slow to get going—after launching in late 2019, there were only two partners by the end of that year.

Biglari said the program is “now in high gear,” however. In the process of admitting the 159 partners, it received about 52,000 applications (an acceptance rate of .31 percent). “This franchise opportunity cannot be purchased, only earned. Our program is designed for those long on ability but short on capital. Motivated men and women are making a difference at Steak ‘n Shake,” he said.

Steak ‘n Shake’s franchise-partnership system resembles a federation of legally and administratively separate enterprises, Biglari explained. “Absentee ownership is neither desired nor permitted. Our partners are responsible for managing the day-to-day operations of their restaurant, setting wages, and building their business one customer at a time,” he said.

Steak ‘n Shake believes this arrangement resulted in one of the country’s most diverse franchise operations. Minority- and women-owned businesses account for 60 percent of its franchise partnerships. Black-owned enterprises constitute 21 percent. “We did not set out to attain this achievement. We simply removed all the barriers facing our potential partners,” Biglari said.

While this unfolds, Steak ‘n Shake’s traditional franchise business will be where growth happens, the company said. Like many quick-serves, the idea is the brand can balloon without a major capital outlay, with the funding fronted by third parties. High-return, annuity-like cash flows.

Starting in 2010, the company (Biglari took control in August 2008), invested “substantial sums” to advance its traditional franchise arm. Going back, Biglari, who took over for Wayne Kelley as CEO, claimed the company was losing $100,000 per day before the takeover. Steak ‘n Shake recorded a $9.8 million loss in Q3 of 2008 and saw same-store sales decline 14 consecutive quarters. Biglari Holdings also claimed Steak ‘n Shake was “within 90 days of insolvency.” It lowered prices and traffic spiked.

The company’s first franchise unit opened in 1939. Over the next 71 years, it added about one per year.

From 2011–2015, Biglari said Steak ‘n Shake’s franchise business operated at a loss, “but intrinsic values advanced.” It allocated capital to develop franchising, with the exception of creating greater dollar value for each dollar spent, he said.

There were reports Steak ‘n Shake was on the doorstep of bankruptcy in winter 2021. It was a convoluted story involving the company and Fortress Investment Group, and a lawsuit accusing the latter of misusing confidential business information in an attempt to assume control of Steak ‘n Shake’s assets. But Steak ‘n Shake ended up purchasing and returning the remaining balance of a $220 million loan coming due in March.

Steak ‘n Shake makes up 536 of the 577 units Biglari Holdings directs. Western Sizzlin, acquired in March 2010 for $21.7 million, is run by CEO Robyn Mabe and delivered $26.6 million in cash to the company in 2021. Unlike Steak ‘n Shake and its company operated venues and nonconventional franchise program, it’s a traditional, royalty-based franchise business, with all but three of its 41 stores franchise run.

Returning to Steak ‘n Shake, Biglari admitted the chain “was struggling” in recent years. From 2018–2020, its aggregate pre-tax loss before corporate interest was $33.8 million. Now, it’s back in the black, he said.

Last year, with all the aforementioned changes in process, the brand produced $13.5 million under the same definition.

As of December 31, there were also four company locations in Europe and 35 franchises.