Sizing Up Dunkin’ and Starbucks

Dunkin' and Starbucks continue to push the envelope with beverage innovation.

It’s probably safe to say Dunkin’ (no longer Donuts) and Starbucks are playing pretty different games right now. Dunkin’ has made a serious push into the convenience and value realm in recent quarters, scaling back its menu and building mobile-friendly prototypes, while investing in beverage-led positioning. Starbucks’ portfolio, meanwhile, continues to expand into premium retail arenas that redefine its place in the industry. It’s also putting significant resources behind production innovation, digital, and afternoon business. But, despite the differences or similarities in direction, the java giants will always share a competitive bond. If, for no reason else, because they’re both courting customers in search of a cup of coffee.

Dunkin’ sprints into the future with bold expansion goals

How Starbucks’ business is changing as it grows

With National Coffee Day arriving September 29, Blis, a global location data solutions provider, tracked unique foot traffic patterns at Dunkin’ and Starbucks stores around the country over a four-week period. The company normalized the data so it shows an equal comparison of 1,000 customers visiting Starbucks versus 1,000 visiting Dunkin’.

Here were some of the findings:

Dunkin’ ended up receiving more unique visits per location than Starbucks over the course of the four-week period. This is especially true on Tuesday mornings, when Dunkin’s traffic hits its peak. Starbucks tops on Fridays. Mondays showed the least foot traffic for both, with a drop of nearly 400,000 in-store visitors compared to Tuesday. Blis found this surprising, considering you’d assume guests would need a latte to get through the Monday blues. Data, however, suggested otherwise.

Additionally, Blis sampled 34 ads. It discovered that Dunkin’ advertised food options 14 times to Starbucks’ zero. This makes sense strategically when you consider a couple of notes. For one, Dunkin’ has simply devoted more attention to that space over the years. But secondly, the chain unveiled its first national value platform in company history this past April. Dunkin’ Go2s delivered stellar breakfast sandwich results, Dunkin’ said, among other positives. Go2s launched April 2 and allowed guests to pick from among three of the brand’s most popular breakfast sandwiches, and purchase two of their “go-to” favorites. Average checks for the menu hovered around $8–$9. Then Dunkin’ introduced a $2 Dunkin’ Run snacking menu in July centered on to-go treats like Donut Fries and Waffle Breaded Chicken Tenders. So there was news to share.

Starbucks opened its first standalone Princi bakery and café August in Seattle. Stores are headed for New York and Chicago this fall, with promises of more to come. While this is a big push for Starbucks, the coffee chain doesn’t typically pour as much marketing spend into its food innovations.

And speaking of that, Starbucks had a whopping 29 coffee ads, while Dunkin’ had just 11. Is Starbucks pushing guests to come for coffee, while Dunkin’ is looking at an all-day strategy? Both brands have talked about pulsing afternoon business—p.m. deals, Dunkin’s snacking menu. Starbucks said in April that the “occasional customer,” someone who visits one to five times per month and largely doesn’t have a digital relationship with the brand, was making up nearly 50 percent of the volume sold in the afternoon. Chief operating officer Rosalind Brewer said Starbucks was making a concerted effort to target these customers. It was also launching a focused campaign around afternoon business by focusing on cold brew, refreshers, and teas. A move to reduce LTOs by 30 percent also aimed at helping Starbucks simplify “the work in the afternoon so that the partners can engage with the customers so you'll get both the experience when you're in the Starbucks café,” Brewer said. Iced beverages contributed nearly 40 percent of Starbucks overall revenue growth in Q2 despite it being one of the coldest quarters in the company’s fiscal calendar.

On the flip side, data gave Starbucks a resounding win at breakfast time. Twenty-eight percent more people visit Starbucks in the morning compared to Dunkin’, Blis said, with the gap narrowing by lunchtime. Blis credited Starbucks’ expansion of its Happy Hour (the first since 2010, the new promotion is based on offers via invitational only, and presented throughout the year with single-use digital coupons across more beverages than just Frappuccino).

Dunkin’ shows strong from 3–6 p.m., reflective of the success of its afternoon promotions, offers, and menu innovations. The traffic foot gap closes from 28 to 6 percent by dinner (5–8 p.m.)

At Starbucks, global same-store sales were up 1 percent in the third quarter. Revenue hit $6.23 billion.

Check out the chart below to see how the arrow shifts by daypart. 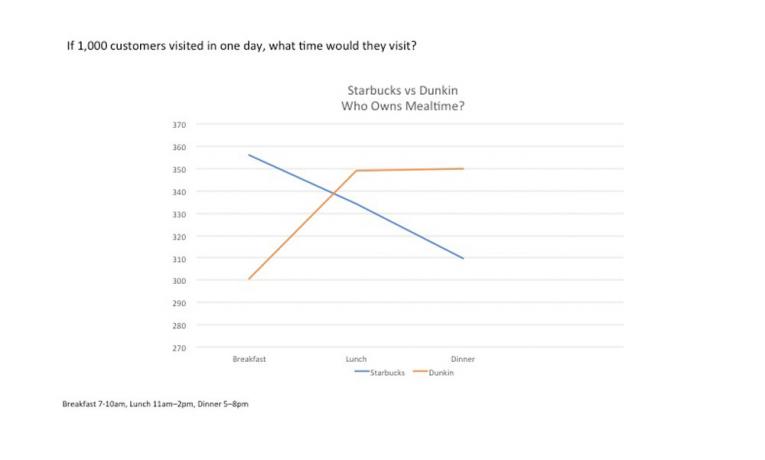 Kitchen Tech
Tackling Takeout (Off-Premises Solutions)
The Future of Drive Thru
Vendors to the Rescue
I Saw the Sign (Digital Signage)
Restaurant Equipment & Technology 2020
Breakfast Boom or Bust?
Pack It Up

1 ADP Blvd
Roseland
NJ
973-404-4360
ADP business solutions, so you can focus on what matters most — your business.
POS Systems & Equipment

The Future of Fast-Food Drive-Thru Arrives Early
Will the Holiday Season Ease Restaurants’ Hiring Woes?
The Power of Franchising in a Post-Pandemic World

The 2021 QSR® magazine Drive-Thru Study
Opinion: With Chick-fil-A and the Drive-Thru, Don’t Race to Conclusions
The Environment and Drive-Thrus: Not an Idle Concern Anymore

Dutch Bros Surges Onto Wall Street with Dreams of 4,000 Locations
The Next Frontier of Restaurant Franchising
Sweetgreen to Purchase Robot-Powered Fast Casual Spyce