Starbucks to Close 800 Stores as it Readies for the Future

The transformation is already underway.

COVID-19 learnings changed the trajectory of Starbucks' growth. Among the many disruptions brought forth by the crisis, it ushered in a changing consumer. One who was emerging pre-pandemic, but has arguably come years in a matter of months. And two words define the present and future for Starbucks: Convenience and efficiency.

In June, the company unveiled a portfolio repositioning that predicted 600 corporate closures over the next 18 months or so (400 in the U.S. and 200 in Canada).

The company provided an update Thursday during its Q4 review—a recap that looked back at one of the more innovation-packed years in Starbucks’ history.

But as much as the company adjusts operations to meet this new guest head on, things like handhelds in the drive thru, curbside at 800 restaurants (2,000 by the end of next year), delivery, and multi-tender payment rewards, the reality is 3 percent of Starbucks’ stores remained temporarily shut in Q4 across the entire quarter, which effectively weighed down its market comp by about 2 percentage points. And this was a real estate dynamic split between dense metro trade areas and suburbs.

In Q4, about 75 percent of Starbucks’ U.S. sales volume flowed through drive thru and mobile orders. While down from 90 percent in Q3 (thanks to café reopenings and a shift to on-premises occasions), it’s still significantly higher than pre-COVID levels of 60 percent. Today, about 65 percent of Starbucks’ domestic restaurants have restored seating.

Moreover, Starbucks’ mobile order transactions increased from 18 percent in Q2 to 24 percent in Q4, aided by mobile app upgrades as well as increased messaging across marketing channels to drive awareness. Not to mention, a lot of people remain wary of stepping into a café. And if they do, they’d rather just walk in, grab and go, and not interact with anybody.

The June announcement spoke to what’s happening currently for Starbucks’ development and will continue to unfold over the coming year (perhaps longer)—the transformation of its dense urban business by shuttering lower-performing stores, while continuing to capture traffic where “customers need us to be,” CEO Kevin Johnson said Thursday. This includes improving existing drive-thru stores, new formats (such as the Starbucks Pickup model), and curbside. “At the same time, we remain focused on our strategy of developing drive-through locations largely in suburban and semi-rural locations, extending the reach of the Starbucks brand with high volume, high margin stores providing our customers the convenience they are seeking,” Johnson said.

Broadly during COVID, Starbucks witnessed U.S. transactions migrate from dense metro centers to the suburbs, from cafes to drive thrus, from early to mid-mornings, with outpaced recovery on the weekends.

So it would have been about 7 percent, or 93 percent of the way back, if not for the 3 percent closures drag. Regardless, vast improvement from same-store sales declines of 65 percent at the pandemic's depth.

Figures progressed throughout Q4, down 14 percent in July before improving to negative 11 percent in August and negative 4 percent in September. Starbucks said momentum continued into October but didn’t provide specifics.

The company guided growth of 17–22 percent next year in the Americas segment.

Perhaps the best illustration of Starbucks’ traffic shift, however, is that U.S. same-store sales were actually “solidly positive” at drive-thru locations and suburban stores in Q4 and the month of September, respectively. The line-busting handhelds mentioned earlier, where Starbucks’ employees walk the drive-thru line to improve throughput, are live in about 100 locations, with the goal of 400 additional stores by the end of Q1 2021.

Globally, Starbucks expects to add about 1,100 net new stores next year, down from 1,400 in 2020. Most of that will take place internationally.

Slimming down isn’t unique to Starbucks in this climate. Dunkin’ expects to cut 800 U.S. locations this year and has already closed more than 600. Pizza Hut has closed 1,205 venues in 2020 already, 632 in Q3 alone.

The sentiment is steady across the board. Remove old, under-performing units in favor of more convenience-friendly formats. Starbucks CFO Pat Grismer put it like, “clearing the way for the development of new, more efficient retail store formats that cater the customers' increasing desire for convenience, while also improving trade area profitability.”

Grismer said Starbucks believes the closure impact to be temporary, and more a springboard than a setback. The company plans to return to its long-term guidance of 6–7 percent annually in fiscal 2022.

“What we've learned as we've gone through the COVID process, we are learning more about where our customers are returning to access their coffee,” COO Roz Brewer said. “So we've accelerated the closures that we have planned for the U.S. stores. Part of this is also to learn what our new formats can offer us.”

Johnson said Starbucks’ experience this summer put it in “much stronger position to move even more rapidly with the strategic transformation.”

“The thing I would point out that is a big benefit of that, and certainly working in our guidance, is a meaningful improvement to not only our Americas operating margin, but then how that flows through to the enterprise,” he said. 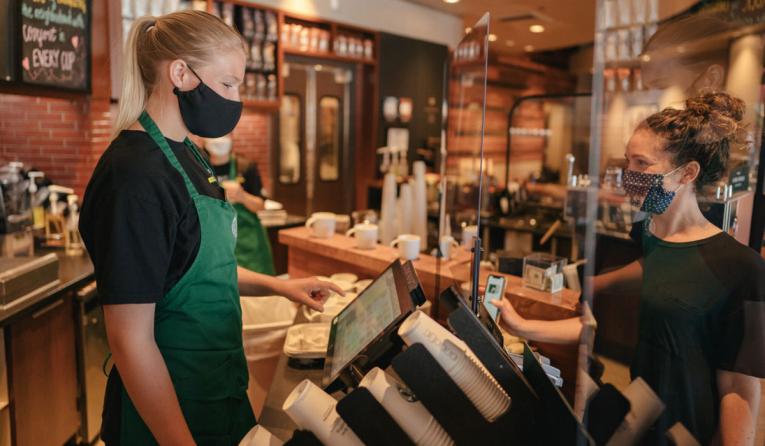 Starbucks has reopened seating in about 65 percent of locations.

Starbucks Pickup locations are designed for large metros. The brand pictures a mix of traditional cafes and Pickup locations in each market. The first version of the latter, tailored for consumers who order ahead and pay through Starbucks’ mobile app for pick-up, or those who want to order delivery, debuted November 2019 in New York City’s Penn Plaza. The second is planned for 42nd and Park near Grand Central Terminal in the near future.

Starbucks sees these within walking distance of typical units, looking toward NYC, Chicago, Seattle, and San Francisco out of the gate. An end goal: more points of presence to serve on-the-go customers while reducing crowding in cafes and actually improving the “third-place” occasion Starbucks built a coffee empire on. It aligns with several notions—higher levels of mobile ordering, more contactless pick-up options, and, importantly, reduced in-store congestion.

Starbucks previously said these will number in the “hundreds” within five years.

The congestion point might be an understated one. Johnson said Starbucks predicts “huge, huge demand” for the third-place experience once there’s a vaccine and therapeutics that allow people to feel more comfortable socializing and being a part of the community.

“That's seating in those stores and people coming to enjoy their beverage in their food with others and socialize in our stores and be a part of the community,” he said. “But this is down the road … there is going to be a huge, huge wave of demand for that and so not only are we laying the foundation with the digital relationships and taking care of our customers with safe, familiar and convenient, but we are also investing and ensuring that when that demand unfolds that third-place experience will be at the pinnacle of serving those customers who want to come and be a part of the community and socialize again because that's something that we all aspire for.”

What prompted this response from Johnson was a question about Starbucks “Stars for Everyone” rewards update in September.

The rollout made it easier for customers to earn “Stars,” but, perhaps more notably, allowed users to scan their app and pay with cash, credit/debit cards, or select mobile wallets and earn rewards toward free items. Members can save the payment methods directly in the Starbucks app to earn Stars.

This was long one of the biggest friction points and complaints among the chain’s core loyalty base. Previously, customers had to load funds onto their account.

“That expanded customer reach digitally is going to be a huge asset even, I'll say post-COVID or post-vaccine, but the fact that we're focusing on customer experience, beverage innovation in addition to digital, is important for the following reason: People are craving the opportunity to socialize right now, and they can't,” Johnson said.

Starbucks Rewards drove 47 percent of U.S. company-operated tender in Q4 for the second consecutive period, up from 43 percent in Q1 before COVID arrived. Importantly, Rewards contribution improved and returned to pre-virus levels driven by recover in member spend and higher mobile order and pay usage. Additionally, Starbucks’ 90-day active rewards member base increased b 3 million members in Q4 to approach past levels of 19.3 million, a year-over-year lift of 10 percent. It had fallen as low as 16.4 million when people locked down.

Another interesting note is that Starbucks’ Cream Cold Brew actually outsold the Pumpkin Spice Latte this season, which led the entire pumpkin platform to a record high in average daily units. It reinforces Starbucks’ transaction shift to mid-morning and afternoon occasions.

Part of the check growth was also due to premium priced plant-based items and larger group orders.