And why COVID-19 might just have set the plan in motion.

Quarantine life, unemployment surges, and remote work stripped mobility out of the restaurant equation for many customers. Arguably, this COVID-19 reality flashed sharpest at brands that court habitual business—namely early dayparts, like breakfast and solo coffee trips. Starbucks’ EVP and North America president Rossann Williams, for instance, said Tuesday the chain’s morning sales mix has largely recovered to pre-virus norms—the percent of tender by daypart is back in line with previous figures, in other terms, thanks to vaccine distribution and the continued reopening of stores. And it should sustain as central business districts and urban trade areas recover.

However, even so, Starbucks’ peak daypart has moved slightly back, from 7:30 to 9 a.m.—where it was before COVID—to 8 to 10 a.m. A clamp on routine behavior, though, appears to have accomplished something else as well: A lack of mobility is translating into digital agility.

According to analysis from App Annie in March, app sessions inside food and drink apps grew up to 105 percent, year-over-year, in target markets. At their lowest point, in late March 2020, app sessions stood at 1.81 billion. From then on, they spiked upward to reach 3.02 billion sessions by the end of December 2020.

Starbucks witnessed similar movement. It reported 19.4 million 90-day active Rewards members pre-pandemic. The number dropped to 16.4 million at the end of Q3 2020 (reported in September) before recovering to 18.7 million by August.

It hasn’t let off the gas since. CEO Kevin Johnson on Tuesday shared a conversation that recently took place among company leadership. While chatting about pandemic progress, he dropped an ambitious target into the pot.

“I’m not going to give a timeframe,” he said. “It might take a couple of years. But double that number.”

On that day, Starbucks was sitting at roughly 20 million 90-day active members. So it’s a 40 million-member projection.

As Jeffrey Bernstein, Barclays analyst, noted: “Doubling that 20 million is an incredible goal.”

COVID’s jostle of in-store trends sent a jolt through Starbucks’ digital drivers, and how they connect across what the company calls its “Trade Area Transformation,” which is essentially the repositioning of real estate and closure of roughly 800 domestic stores.

Starbucks’ U.S. same-stores grew 9 percent in Q2, announced Tuesday. It marked full recovery for the brand and meaningful improvement from a negative 5 percent result in Q1.

Fifty-two percent of Starbucks’ U.S. company-operated sales in the period came from Rewards members. Total 90-day active members grew by more than a million to a company record of 22.9 million. And that’s on top of the million the previous quarter. Pre-COVID, Rewards members accounted for just 43 percent of sales.

Although much of this can be tied to pandemic operating conditions—mobile orders mixed 26 percent of corporate U.S. transactions in Q2, up 18 percent, year-over-year—a lot of it also stems from Starbucks “Stars for Everyone” launch six months ago. Since, the company’s 90-day active member base ballooned 19 percent, “a clear testament that the program is attracting customers as we had intended,” Johnson said.

Starbucks to Close 800 Stores as it Readies for the Future

As a refresher, the update made it easier to earn “Stars,” but, perhaps more notably, allowed users to scan their app and pay with cash, credit/debit cards, or select mobile wallets and earn rewards toward free items. Members can now save payment methods directly in the Starbucks app to earn Stars. This long represented one of the biggest friction points and complaints among the chain’s core users. Previously, customers had to load funds onto their account. That hurdle was removed, and guests also collect rewards faster under this program. If somebody saves a card to their account to pay (they can also link up PayPal) they earn a star per dollar. It’s a one-step transaction.

Johnson said Starbucks’ base increase was underpinned by a meaningful uptick in conversions, with more app downloads advancing to member activations.

This latter point has been a huge target for Starbucks for years, well before COVID crashed the whiteboard. In January 2019, Starbucks grew active membership 14 percent—growth it hadn’t seen in close to four years. However, perhaps more meaningful, the company widened the aperture of its digital reach and created a funnel of activation, efforts that began the previous spring. This led to 13 million digital customer registrations in that quarter. These weren’t necessarily loyalty members; just guests who engaged digitally with Starbucks, either through emails signups or other promotions, like renewed Happy Hour deals. And so there were some 30 million U.S. customers connected digitally with Starbucks, in one form or another.

The next step was getting them to convert to loyalty, which is where the Stars for Everyone program kicked in—a way to get engaged guests to come back. “This includes a robust marketing activation plan to drive not only awareness of the changes but overall awareness of the program and key customer benefits,” Johnson said at the time. “As we have shared in the past, lack of awareness has historically been one of the limiting factors to customer adoption, and we have a significant opportunity to amplify a powerful message around loyalty.”

The answer was a multi-tier redemption program. 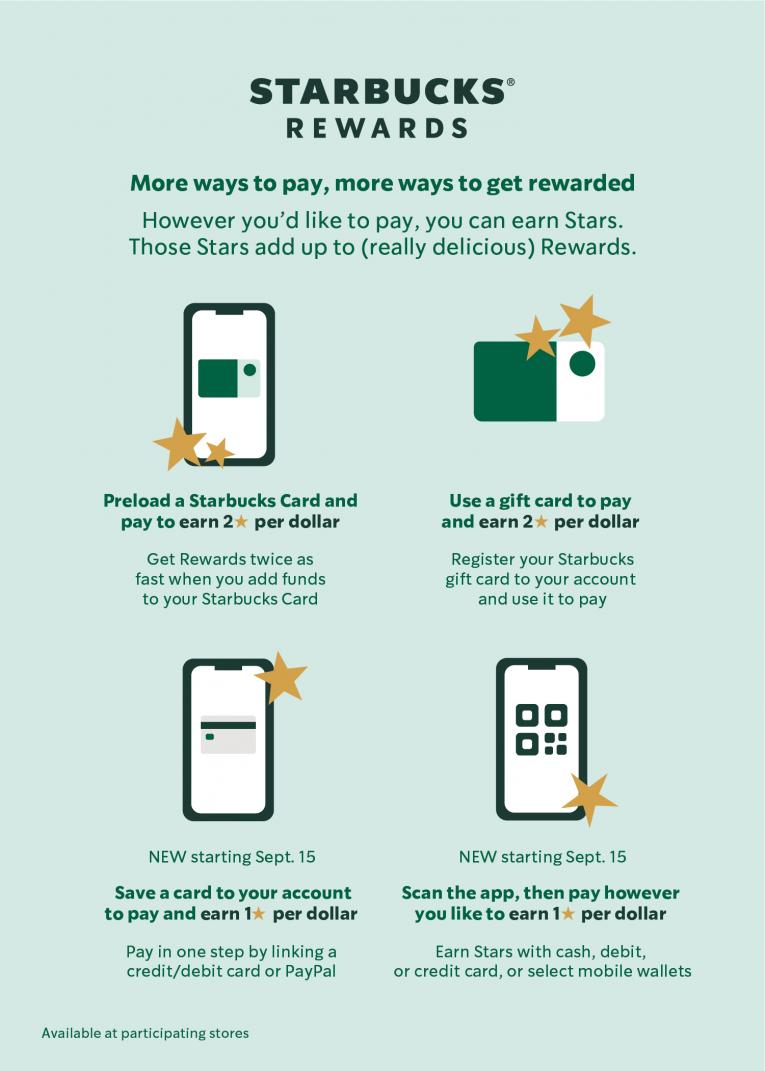 A look back at what changed with rewards.

Brady Brewer, Starbucks’ EVP and chief marketing officer, spoke to the realities driving growth today. Thanks to COVID, digital ordering webs out differently than it used to, and it offers brands a chance to connect the experience for guests.

“There are few things that we're doing,” Brewer said. “One is we want to know as many customers as we possibly can. We want to personalize their experience, and we want to make the experience effortless. And so, effortless means things like mobile order, curbside, delivery.”

Stars for Everyone lowered barriers to entry so customers could access benefits and experience incentives and personalization. The pay-as-you-go option can’t be understated.

“Lowering those barriers to entry, reaching as many people with the program, and then ensuring that the incentives and the services that are attached to that program to make the experience personalized and effortless,” he said. “That's how we're growing the program, and we've seen just tremendous results obviously over the last six months with those programs attracting new members and seeing them activate.”

Johnson said Starbucks is working with tech companies that have machine learning algorithms, like Amperity (a company Johnson sits on the board of), to better serve and customize offers for digital users, including non-rewards members. “I think we've got a great set of features and initiatives that enhance the customer experience and how they want to use that mobile app to personalize that customer experience in ways that are relevant to them,” Johnson said. “And for us to find new ways to reach out to non-rewards customers and start to personalize our engagement with them to bring them into becoming Rewards customers.”

Brewer added Starbucks saw a significant number of occasional or lower-frequency customers join since it launched Stars for Everyone. That’s helping support the two- to three-times average versus non Rewards customers, in terms of frequency, Starbucks generally witnesses.

“We still see that high frequency overall for the program, but what's great about seeing those occasional customers join is that we also see that significant lift in frequency and spend from those members just as we do from the high frequency members that join,” Brewer said.

And that’s where a lot of the opportunity resides, and why 40 million members would be a category changer for Starbucks.

“We see a lot of runway there as Kevin said, and we'll continue to press on that in the months and years to come,” Brewer said.

Starbucks booked revenue of $6.7 billion in the quarter, up 11 percent from the same period in 2020. Net profit more than doubled, climbing to $659 million form $328 million, year-over-year.

While it’s difficult to really measure current results against a COVID lap, Starbucks’ U.S. comp sales in the month of March grew 11 percent on a cumulative two-year basis. That’s the point on which the company can tout a “full sales recovery.”

Comp sales skyrocketed 91 percent in China off the pandemic floor and global results lifted 15 percent, driven by a 19 percent increase in average ticket, partially offset by a 4 percent decline in transactions.

CFO Rachel Ruggeri said ticket should moderate as customer mobility improves. She anticipates store visitation frequency beginning to normalize in the latter half of the year. When that happens, traffic and ticket comp should shift. 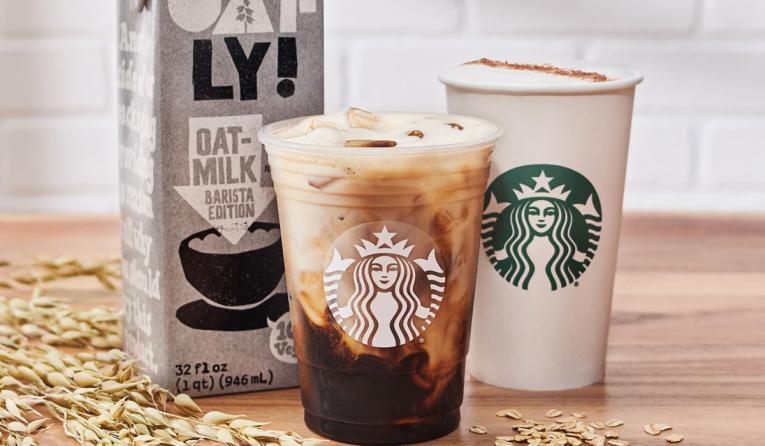 As a result, Johnson said, drive-thru recorded a slight improvement in out-the-window times in Q2 versus the prior year. Drive-thru drove more than 50 percent of net sales in Q2, increasing north of 10 percent from pre-pandemic levels.

The brand has closed about 70 percent of the 800 units it previously guided in nine months, “clearing the way for the development of new, innovative and more efficient retail store formats over time.” This includes more drive-thrus and Mobile Pickup stores in urban metros.

Important to note, about 200 new units have been built and reopened alongside the closures. “And I think that's boding very well for us because it's actually helping us improve the customer experience by having the right store in the right location with the right format for customers,” Johnson said.

He went on to highlight Starbucks’ “Deep Brew” program, an artificial intelligence initiative that was really unveiled publicly in October 2019.

The AI engine is now used today throughout the company. It personalizes offers and suggestions employees make to customers. It’s also at the center of the footprint transformation. Deep Brew automates daily inventory orders as well—something it’s doing “Across hundreds of U.S. stores as we deploy it broadly,” Johnson said. The program supports employee schedules and optimizes it in ways that focus on freeing up employees to divert attention to customer experience.