The Steak ‘n Shake of Old is Gone

When customers return, they'll find kiosks and a different experience than before.

Across Steak ‘n Shake’s footprint, most of the legacy chain’s dining rooms remain closed. While they’re not going away, they won’t ever look the same, either.

The brand finds itself in the midst of a “radical transformation,” chairman Sardar Biglari said in a letter to shareholders. And one aspect involves fully transitioning Steak ‘n Shake to a quick-service restaurant chain.

Yet what does this look like? It’s a path Biglari shared pre-pandemic before COVID-19 locked up capital. Steak ‘n Shake ended up trying to sell 15 properties to fund remodels. But no sale took place and parent company Biglari Holdings Inc. found itself on the doorstep of a financial restructuring, with the deadline to pay off $153 million in debt fast approaching. It was able to avoid Chapter 11, seemingly at the 11th hour, as it satisfied the burden with capital from Biglari Holdings. The upshot being, Steak ‘n Shake no longer carries debt.

And that reignites the original conversation.

Steak ‘n Shake, a full-service brand for its first 78 years, is in the process of equipping units with what Biglari labeled “advanced self-service.” When customers return, there won’t be servers. There won’t even be attendants behind counters. Rather, Steak ‘n Shake guests will initiate transactions at a kiosk. “We are embracing efficiency and transitioning the service model to empower our guests to place and pick up their own orders,” Biglari said.

Steak ‘n Shake increased off-premises sales at comparable stores 14.3 percent in 2020 as dine-in felt the COVID cut. This wasn’t a pandemic-specific trigger, though. A combination of labor-intensive, slow production and high-cost table service proved a faulty business model for Steak ‘n Shake well before coronavirus, Biglari said. “Simply put, the operation of dining rooms with table service was a money loser,” he said.

“What I had previously assessed as a sustainable competitive advantage proved to be anything but when our labor expenses continued to rise over the last several years,” Biglari said. “The Achilles’ heel of increased labor costs in the dining room negated our other advantages, resulting in an overall handicap.”

By eliminating the unprofitable business dining rooms generated, the chain effectively reduced revenue by one half, Biglari said. However, Steak ‘n Shake's labor now runs at about 29 percent of net sales, albeit at a lower sales volume.

“The dining room with table service was undoubtedly a revenue center, but it was not a profit center,” Biglari said.

“A conversion to a bonafide quick-service restaurant chain will, we believe, enhance the company’s economics,” he added. “A refusal to invest, however, would mean that our competitors would retain their edge.”

To the earlier point, Steak ‘n Shake’s counter-service dreams weren’t born out of COVID. It just would have taken several years to get there before, Biglari said.

Coronavirus prompted the company to set a much firmer target, making the call to emerge from the public health crisis with a different service model for Steak ‘n Shake’s entire system.

“In effect, the pandemic hastened the inevitable,” Biglari said.

Steak 'n Shake is Turning Into a Fast-Food Chain

The Burger Gold Rush is On at Steak 'n Shake

The company’s confidence in the new service model, and resolve to roll it out, means the majority of earnings generated in 2020 “will not be available to Biglari Holdings.” In other terms, it’s going to take a significant investment to accomplish the goal, with financial softness along the way.

The capital outlay per unit ranges between $100,000 and $200,000 to remodel the interior of the restaurant, introduce a new point-of-sale system, and install the self-order kiosks.

Biglari said expenditures would be phased in by prioritizing restaurants “that possess exemplary leadership—namely, those owned and operated by franchise partners, who invariably provide the gold standard in service.”

This brings Steak ‘n Shake to its other “monumental change” taking shape today, and yet another initiative that grabbed headlines before COVID snatched them.

In fall 2018, the chain announced a refranchising initiative designed to foster a single-unit operator system. Basically, follow the Chick-fil-A model to improve service through entrepreneurial-minded owners.

Vividly, Steak ‘n Shake would do so by asking franchisees to make an upfront investment of only $10,000. Steak ‘n Shake then assessed a fee of up to 15 percent of sales as well as 50 percent of profits. “We generate most of our revenue from our share of the profits. Under this arrangement, a franchise partner is able to earn considerable sums, which is the way we want it,” Biglari said.

“In the end, nothing is as important as the way our customers are treated,” he continued. “It takes the right leadership in a unit for customers to be served in a warm, caring, and hospitable manner. To achieve our goal, we are building a culture of ownership at the unit level. For operators to think and act like owners, we believe they must be owners. We are becoming a company of owners, changing the culture of the organization in our quest for service excellence.”

By the end of 2020, Steak ‘n Shake converted 86 corporate-run stores into these single-unit franchise partnerships—an increase of 57 partners from the prior year. It had just two partners at the beginning of 2019.

“Doubtless, a good number of our partners will become millionaires. But make no mistake: We are not minting millionaires but are merely providing the means—they are earning every penny,” Biglari said.

For Steak ‘n Shake, the voluntary turnover rate of its franchise partners was 1 percent last year.

Originally, the company believed it would take about three years to transition. There were 400 company-run venues at the time.

“I was overly optimistic with my timeline, but we have no intention of lowering our standards to meet it,” Biglari admitted. “Whether it takes us an additional year or two is less important than ensuring that everyone entering the system is no less talented or driven than those we have assembled to date.”

The company now has two franchise agreements. One is the nontraditional franchise-partner program. The second is the traditional franchise model, which Biglari said serves as Steak ‘n Shake’s means to grow unit count. Like similar companies, it unlocks expansion potential without a major capital outlay. The funding is borne by third parties.

Here’s a look at the decade comparisons.

Steak ‘n Shake opened its first franchise unit in 1939. From 1939 to 2010, though, it grew by an average of one franchise unit per year. The addition of 71 locations in 71 years contrasts with an increase of 123 in the past decade.

“For the period 2011 through 2015, our franchise business operated at a loss but intrinsic value advanced,” Biglari said. “We allocated capital to develop the franchising business with the expectation of creating greater dollar value for each dollar spent. Our traditional franchise business—domestic and international combined is now a prodigious cash generator. In 2020, traditional franchise operations posted a profit of $6.9 million despite the disruption of the pandemic.”

The overall financial picture for Steak ‘n Shake is a complex one. Present management grabbed the reins on August 5, 2008. From 2009 through 2020, Steak ‘n Shake sent nearly $300 million of cash to Biglari Holdings.

But the company’s performance has zigzagged in more recent windows. It put together a strong eight-year run out of the Great Recession. After same-store sales plummeted 7.1 percent in 2008, it reported seven straight calendars of positive gains, including a 7.5 percent run in 2010 that stacked on a 4.1 percent increase the year before.

The last three years, Biglari said, “have been hard for the company.”

You can see the story unfold below: 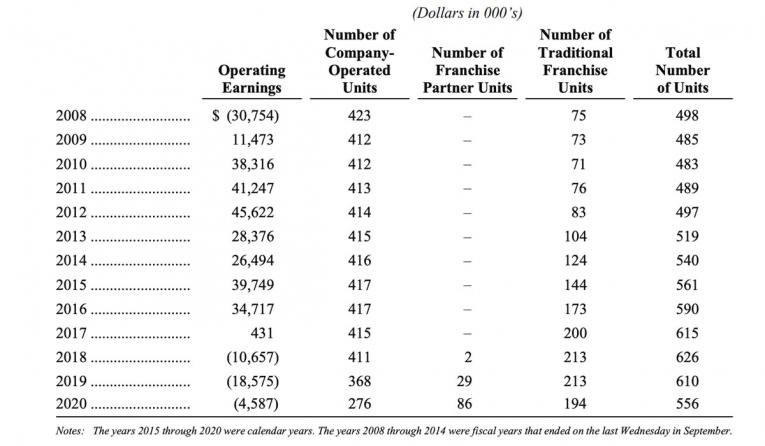 When Biglari Holdings took over, it halted expansion of company-operated units. When the fiscal year ended in 2008, it had 423 corporate venues, “but their dismal performance caused the company to hemorrhage losses of $100,000 per day that fall,” Biglari said.

Even so, many restaurants remained only marginally profitable. This operating shortfall led Steak ‘n Shake to permanently close locations and temporarily shutter others that were not delivering “excellent customer service.”

It had 106 of 282 corporate venues temporarily shuttered (as Biglari noted) in September 2019.

Although this promises to be a foundational year and stretch for the brand, Biglari said it’s not abandoning its differentiators. “Despite the innovations underway, what is fundamental to the company—Steakburgers and milkshakes—remains the same,” he said.