Study: Chick-fil-A Has the Most Satisfied Customers

The latest results from the American Customer Satisfaction Index are in. From an overall perspective, it was a good year for quick service, as satisfaction upped 1.3 percent to an ACSI score of 80. The data, which also measures full-service brands (check the full-service rankings here), is based on interviews with 22,522 customers, chosen at random. They are asked to evaluate their recent experiences with the largest brands in terms of market share, plus an aggregate category consisting of “all other or smaller” restaurants.

On to the results.

Chick-fil-A once again led the field with a score of 87—its third straight year hitting the mark, which is the highest of any restaurant chain, full or limited service (Texas Roadhouse topped the sit-down category with an 82). Chick-fil-A, which has more than 2,200 restaurants in 47 states and Washington, D.C., reported over $9 billion in revenue in 2017, marking 50 consecutive years of sales growth.

Here is the complete rankings for quick-serves: 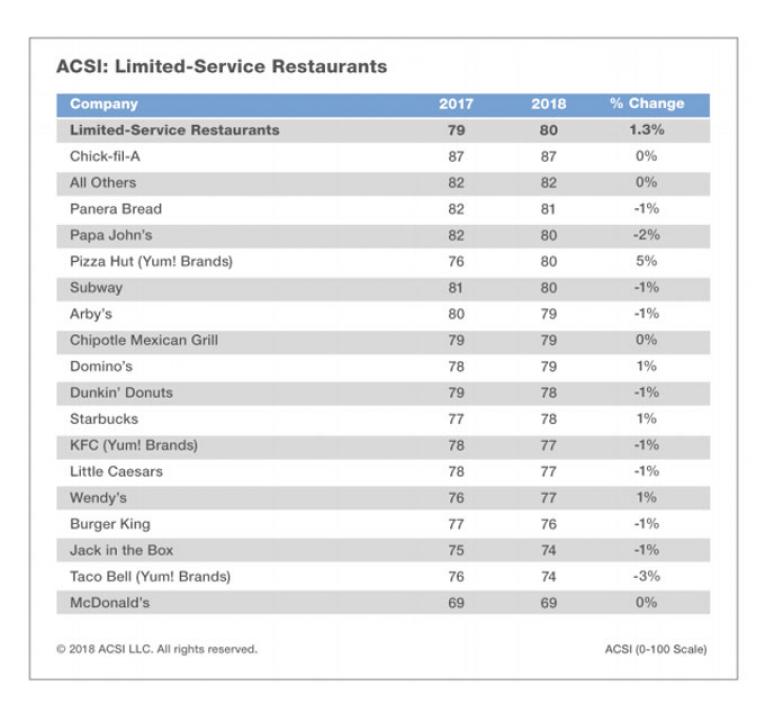 Some other notes to observe. Papa John’s and Pizza Hut are deadlocked while Domino’s is just behind. Papa John’s comp sales fell 5.3 percent in the first quarter but the brand appears just fine when it comes to customer satisfaction. However, the brand slipped 2 percent to lose its spot as the top pizza chain. Pizza Hut, meanwhile, surged 5 percent after YUM! Brands poured $130 million into revitalizing the chain. Pizza Hut is on the upward swing, and broke a streak of five consecutive quarters of declining sales, and report comps gains of 1 percent to start fiscal 2018. In February Pizza Hut also became the official pizza of the NFL, taking over for Papa John’s. The jump in customer satisfaction mirrored KFC’s 7 percent 2016 hike that also came after a YUM! Brands revitalization investment.

According to the data, Chipotle’s customer sentiment is still leveled out following its big dip in 2016 following the food-safety outbreak. But with financials on the rise, a new direction under former Taco Bell CEO Brian Niccol, and apparently new menu changes coming, perhaps the Mexican fast could be in line for a sizable boost next year.

The four burger chains—Wendy’s, Burger King, Jack in the Box, and McDonald’s—have exhibited flat, or nearly flat, customer satisfaction over the past three years.

“As in the full-service segment, these well-known names are focusing on attracting and holding a younger demographic through technology—from investing in automated kiosks to exploring mobile fast pass lanes,” the study said. “It will be interesting to see if such efforts will amp up customer satisfaction in the future.”

At 88, order fulfillment remains the top-rated aspect of the quick-service experience for customers. Staff performance (85) and food quality (85) are on the rise as well. 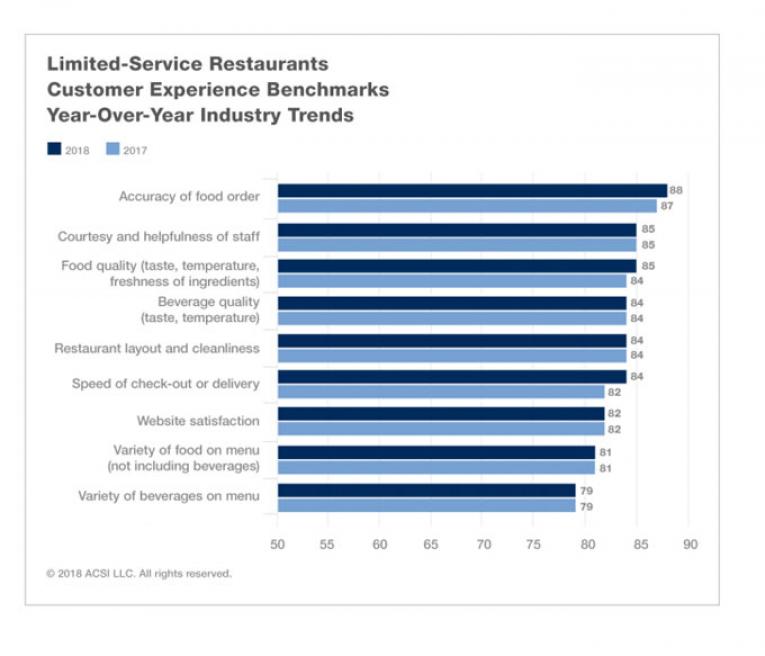 ACSI said it believes millennials are shifting the industry landscape thanks to a demand for fresh, organic ingredients, as well as a desire for new ways to order and deliver food.

“In response, restaurants are revamping menus and investing in new technology (for example, smartphone apps and automated kiosks), as well as adding curbside and third-party delivery services. During the past five years, restaurant revenue from deliveries increased by 20 percent as a growing number of consumers favor at-home dining,” the study said.