Subway is having mixed results with some of its innovations.

After much touting, Subway’s new updates—from its loyalty program and revamped app to its store remodels and menu—have yielded something of a mixed bag. According to consumer research firm YouGov BrandIndex, the world’s largest sandwich provider curried favor with new customers but potentially deterred brand loyalists.

It’s an ironic outcome, given how integral the new and improved loyalty program is to Subway’s revitalization efforts. When the company announced Subway MyWay Rewards February 22, 37 percent of adults aged 18 and older said they would consider purchasing Subway as their next fast-food meal. In the ensuing weeks that number has grown to 40 percent with quality and satisfaction scores also rising.

“The sharper consideration increase among the general population suggests that the refresh might convince people who have left Subway to give it another try. That could be good news for the brand if it can delight those consumers and turn them into regular customers,” says Ted Marzilli, CEO of YouGov. 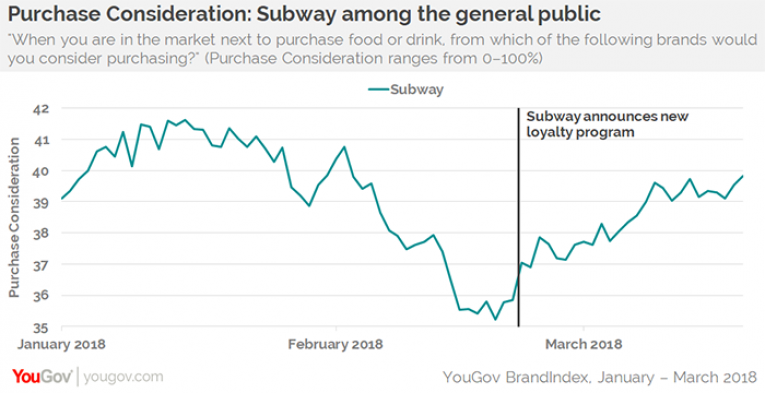 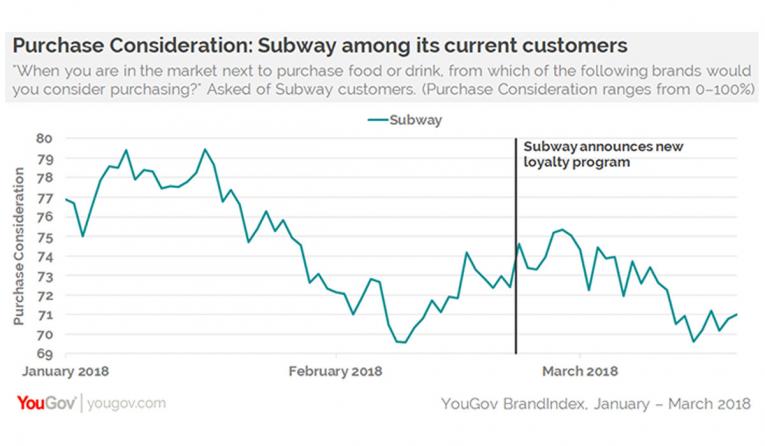 Conversely, Subway’s current customer base’s consideration dipped within the same period. In late February, about 75 percent considered buying Subway for their next fast-food meal. Since then it’s fallen to 70 percent with quality and satisfaction on the downslide, too.

One possible interpretation is that current customers already think the sandwich chain is doing a great job, so their reaction to the changes are more subdued, Marzilli says. However, the data could indicate the very opposite: Even long-time fans are beginning to turn away from Subway. “The dip in consideration during the month of March might also be a confirmation of the refresh really is needed,” he adds.

Subway is playing the long game with a concerted effort to reinvigorate the brand—even when those changes come with growing (or in this case, shrinking) pains.

Last year the chain closed 909 domestic locations, amounting to 4 percent of its domestic pipeline. Subway predicts closures will continue in some form through 2020 as a way to cull underperforming stores while using the mandatory Fresh Forward design to drive business at new and remaining locations.

“Sometimes, we move a location 100 feet or across the parking lot, and once its remodeled with Fresh Forward, we’re getting some new customers coming in the door getting excited about the new look of Subway,” chief development officer Don Fertman told QSR last month.

The remodels have been widely accepted thanks to franchisee buy-in, but the same cannot be said for other changes like the limited-time return of the foot-long special (this time $4.99 compared to the original $5). Hundreds of fervent operators signed a petition against the special, leading senior marketing vice president, Karlin Linhardt, to resign.

Another menu change, namely the Signature Wraps, has been met with far less controversy. YouGov’s findings suggest the new menu collection has done little to excite existing customers but may be part of the draw for new ones.

Similarly, Subway MyWay loyalty program promises a more customized experience wherein users can earn and redeem tokens in a variety of ways. The program is integrated into the new version of the app, which was redesigned to streamline online ordering.

Time will tell how customers—new and old—react to the myriad changes Subway is introducing. For now, YouGov data may be a cause for cautious optimism.

“This is a big ship to turn. But we’re really excited about it. We’re excited about the success of the future,” CEO Suzanne Greco said in a conversation with QSR last month. “The world is changing faster than ever before, and we have to be very nimble.”

Technology Can Flip the Script on Fast-Food Labor Shortages
Is Co-Branding Making a Comeback in Restaurant Franchising?
At White Castle, a Century of Cravings and Counting