The showstopping design has 10 kiosks to replace traditional analog menuboards.

Taco Bell had big plans for the Big Apple in 2018. Roughly three years after revealing a push to enter urban markets nationwide, the chain opened the first of three “Cantina” restaurants in Manhattan. To that point, and since making its 2015 announcement, Taco Bell brought 19 Cantinas and 16 Urban In-Line concepts to life. Six came to NYC’s five boroughs alone.

In total today, Taco Bell has introduced about 30 Cantinas across the U.S., part of about 60 urban in-line locations (Cantina units serve alcohol, while the others just feature a similar design).

But the NYC project itself stalled a bit, and especially in light of COVID-19, when the drive-thru became the lifeline of a clamped industry. In August, Taco Bell unveiled its “Go Mobile” design, a unit specifically built for customers ordering ahead through the chain’s mobile app. Essentially, it’s a double drive-thru prototype built around digital adoption, complete with a smaller footprint (just 1,325 square feet compared to 2,500) and smart kitchen technology that detects when guests arrive and suggests the quickest route.

One thing about the rollout, though, is that it likely signaled a slowdown, at least for a while, of the brand’s “fast social” units, which it revealed in early March. These were also the probable culprit behind why the Cantina and urban development ticked down. “Fast social” was intended as a revamp for Cantina. A Times Square location was set for the fall. Another for San Ramon, California. The latter would center on gaming and allow customers the opportunity to play video games while ordering food.

Additionally, Taco Bell said it was going to pilot a conversion of three traditional suburban restaurants into Cantinas and evaluate their performance.

READ MORE: 14 Glimpses Into the Fast-Food Restaurant of the Future

Then, just a few weeks ago, Taco Bell shared a plan to diversify its store portfolio with a series of fresh models, or “modernization to new levels coast to coast,” COO Mike Grams said. Everything from the first drive-thru Cantina in Danville, California, to some 1,000 “bellhops” across the U.S. by summer.

And one hint was a kiosk-focused store in NYC.

Taco Bell, noting “it’s been a New York minute” since it has expanded in NYC, unveiled a new Cantina in the heart of Times Square, set to open April 14. Notably, it’s a first-of-its kind fully digital Cantina for Taco Bell.

TAKE A 3D TOUR OF THE RESTAURANT

The unit joins nearly 60 Taco Bell restaurants and 20-plus Cantinas now operating across the city. There are 200-plus Taco Bells in the larger New York metropolitan area. And Taco Bell reaffirmed some new growth targets, including a plan for 25 new restaurants in the region this year. This will account for about 10 percent of the brand’s overall development mix. 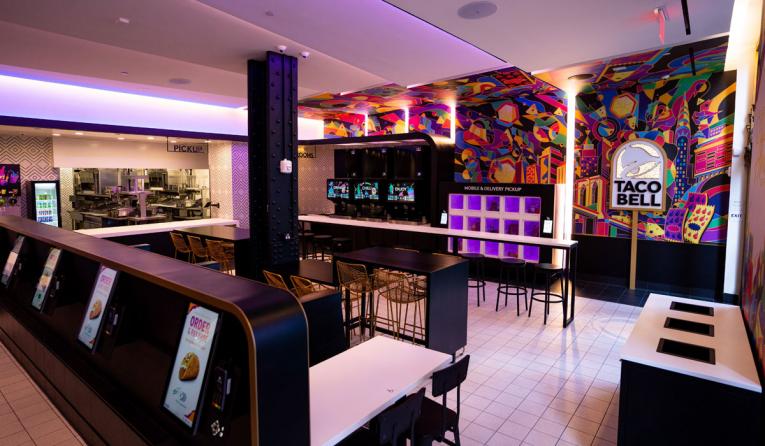 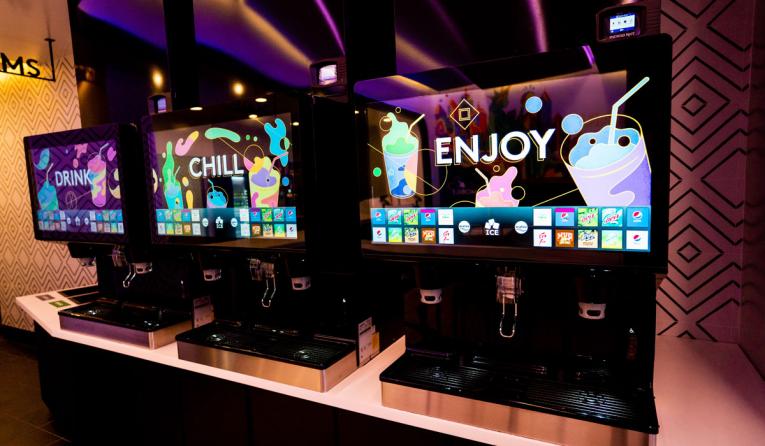 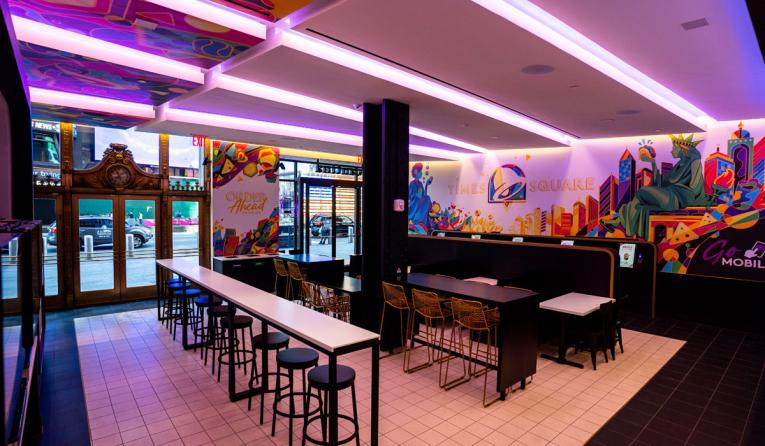 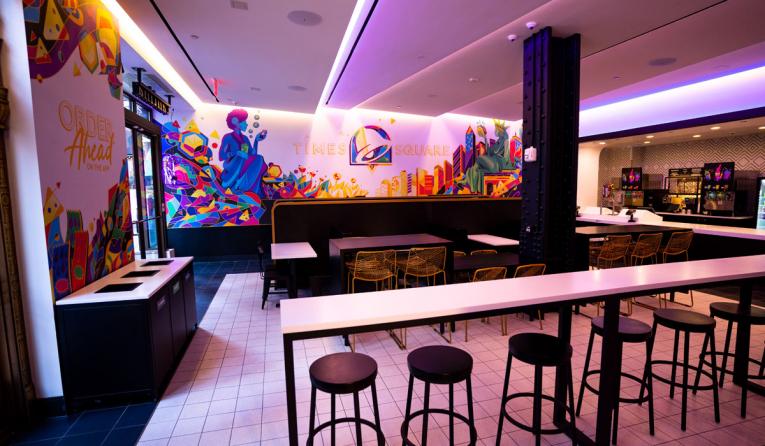 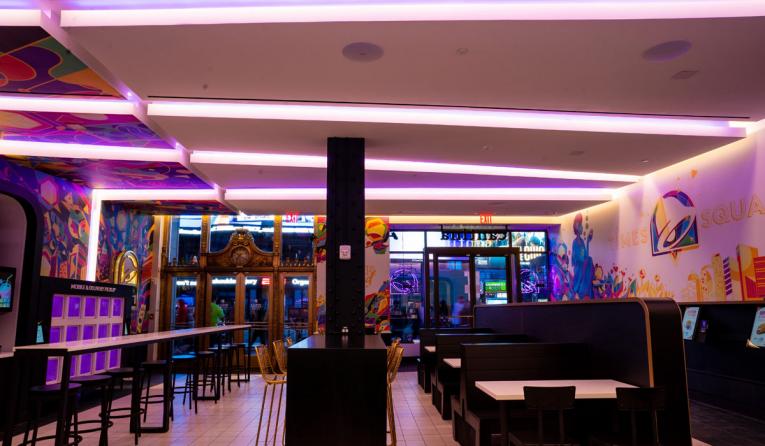 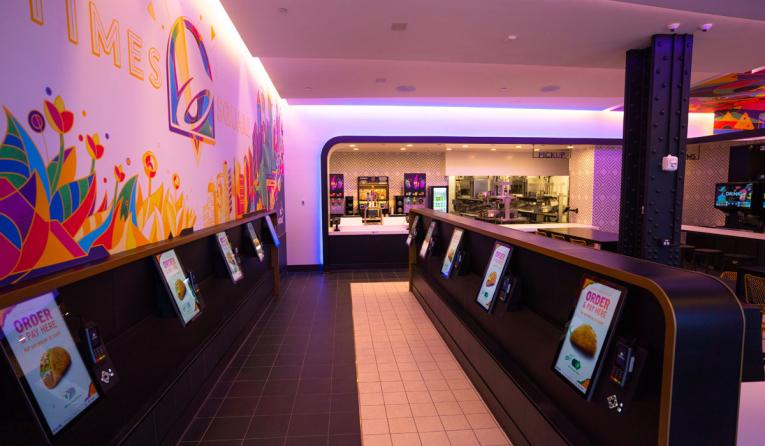 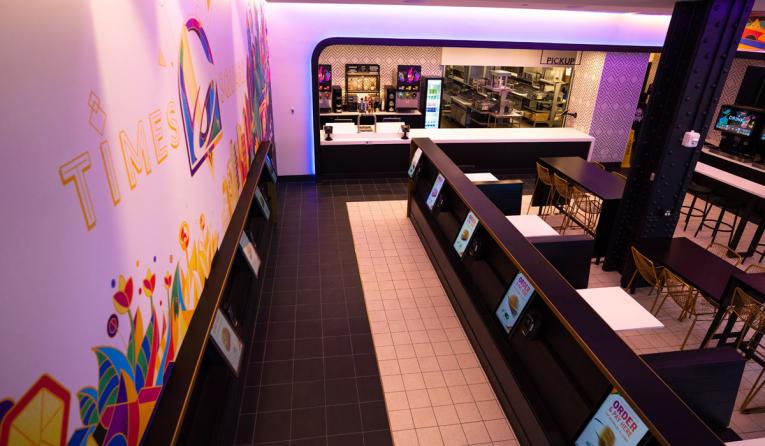 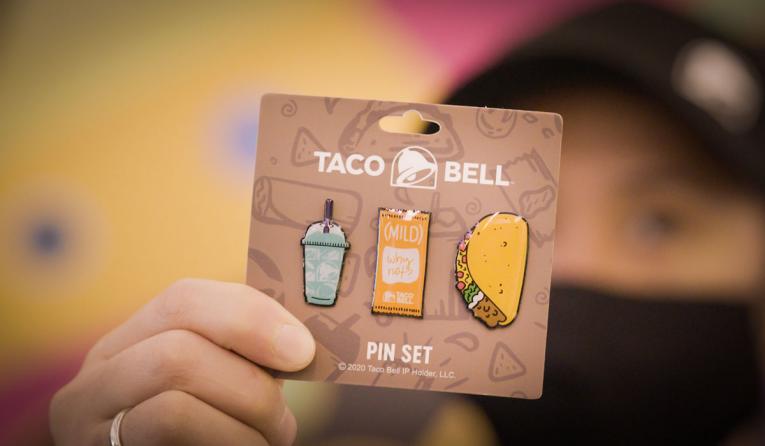 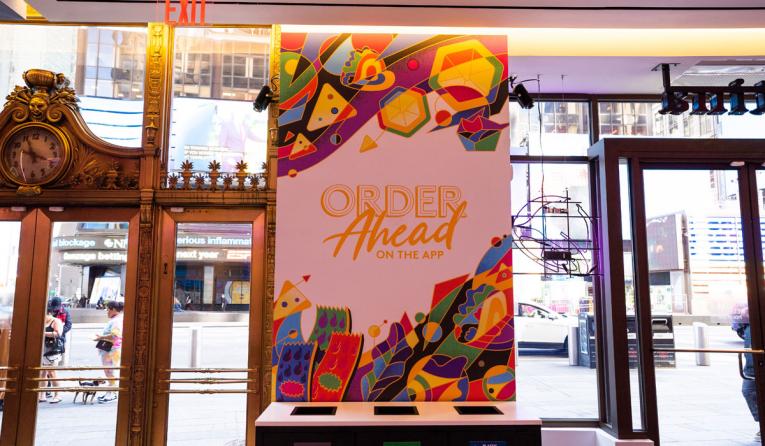 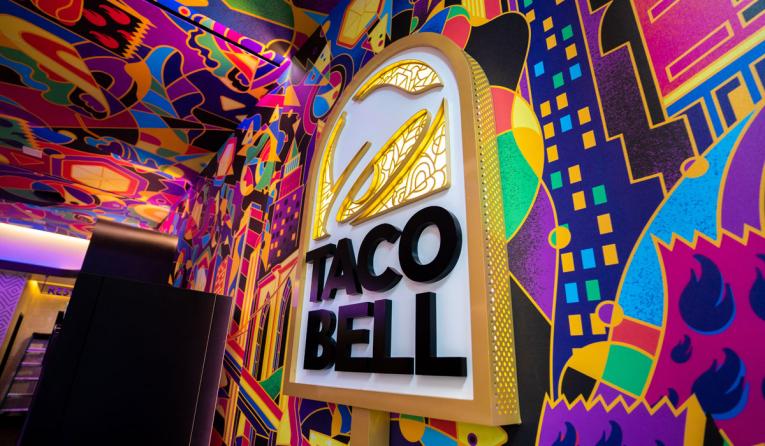 Some elements of the new store include:

Digital-Only Ordering: Electronic billboards line the streets of Times Square, which makes it only fitting kiosks inside the restaurant are equally as prominent, Taco Bell said. The restaurant’s 10 kiosks replace traditional analog menuboards.

Order Ahead Pickup Cubbies: Centered on convenience, this Cantina design highlights the pickup point. Not just that, but Taco Bell built a separate double-door entrance that allows customers to skip the traditional restaurant experience. Guests enter their order number on the touchscreen and grab their meal from one of 15 glowing cubbies.

Souvenirs: Taco Bell is also loading up the store with merchandise to capitalize on the tourist-heavy location, including sauce packet keychains, pin sets, and pens. Customers can order these—like the food—directly via digital kiosks.

Historical landmark: Taco Bell housed the store inside the iconic Paramount Building, which was built 1926–1927 and originally served as headquarters and theater for the major motion picture company. Taco Bell incorporated the original golden entrance into the design, using it as the dedicated side entrance for mobile pickup orders.

Improved team member experience: Taco Bell’s typical Cantina elements—open kitchen and alcoholic drinks—will not just modernize the consumer experience, the brand said. It will also optimize and redeploy the role of the team member within the restaurant experience. Taco Bell did not provide further details, but it’s safe to assume this means more consumer-facing activities instead of order taking.

Similar to its sister brands, KFC, Pizza Hut, and the Habit, Taco Bell’s digital performance elevated in 2020 with business reaching $1 billion. The channel mixed 12 percent in Q4, while delivery mixed in the high-single digits.

Taco Bell was also the first of the brands to test a new advanced POS system, which Yum! described as a modern, tablet-based application that’s completely customizable.