On the first anniversary of YUM! Brands’ strategic $200 million partnership with Grubhub, Taco Bell officially launched nationwide delivery to more than 4,000 U.S. restaurants. Yet that newsflash hardly did the chain’s recent performance justice. Taco Bell, for some time now, has anchored YUM!’s financial reports with sales and growth prospects that crush industry averages. And the fourth quarter was no different. In fact, it was even more robust than usual, with growth potential that’s quickly becoming tough to rival across any segment of the industry.

Here’s where it gets interesting, though. In 2018, Taco Bell’s franchisees committed to more than 1,100 international units under development agreements. Taco Bell reentered London in 2018 and has just three units there. The chain has said, on a few occasions, it plans to add 100,000 jobs stateside by 2022. What that breaks down to is 200 U.S. stores annually as it tracks toward 8,000 total within the next three years. That would amount to 9,000 or so globally if the current chart holds up.

All in all, it’s not overly surprising to see YUM!, a company with such a heavy focus in net restaurant growth, put Taco Bell on the fast path to global expansion. It’s still—by a wide margin—the smallest of its three legacy brands. What’s really intriguing for the added scale, however, is this: Taco Bell is currently working on something newly minted YUM! president and COO David Gibbs referred to as “our initiative of easy.”

In Q4, speed of service improved 3 seconds at lunch and 2 seconds at dinner. Might not sound overly impactful but it helped drive more than 4 million additional transactions during the quarter, Gibbs said. “Their focus on excellent execution is generation operating profit growth, while offering customers faster service and a better experience,” he said, shouting out Julie Felss Masino, the chain’s North America president. 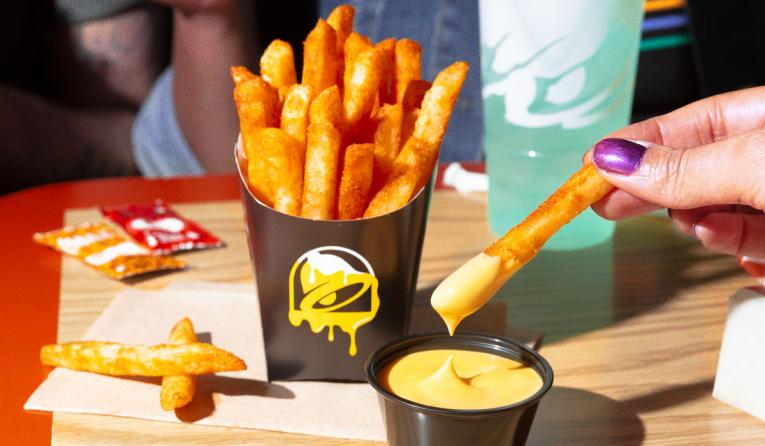 Another factor driving traffic is Taco Bell's value play. The chain has always held a spot on the quick-service Mount Rushmore of value. But it planted its flag with more force than usual this past year. When the calendar flipped to 2018, Taco Bell said—perhaps in response to McDonald’s $1 $2 $3 Dollar Menu—it would tag another 20 items to its $1 offerings. No tier. Just $1. Then 2019 rolled around and Taco Bell decided to play the high-low value game that’s become so widespread at the $5 price point in fast food. Not just value, but value that trades up to more value and allows customers to stack and build higher average checks, or simply remain at the lowest entry point.

Taco Bell’s “Cravings Value Menu” replaced its previous dollar menu on December 27. It’s divided into four categories: Specialties, Sweets, Tacos & Burritos, and $5 Boxes. Taco Bell said it would continue to inject new items into the tiers as the year progresses. Given the brand’s history with product innovation, it's a scary proposition for competitors. (a vegetarian menu is even in the works).

This past quarter, Taco Bell doubled down on value in the U.S., Creed said. It offered double versions of classics, like the Triple Double Crunchwrap and Double Chalupa. Creed added that Rolled Chicken Tacos drove transactions later in Q4.

Taco Bell’s best-selling LTO (more than 53 million orders were placed during the original run from late January to April) of all time—the viral Nacho Fries—were brought back nationwide in January and will show up in next quarter’s review.

The delivery deal is significant. Unlike many brands, which don’t have the scale to take a $200 million stake in Grubhub, Taco Bell and YUM! have gone about the process different than most. 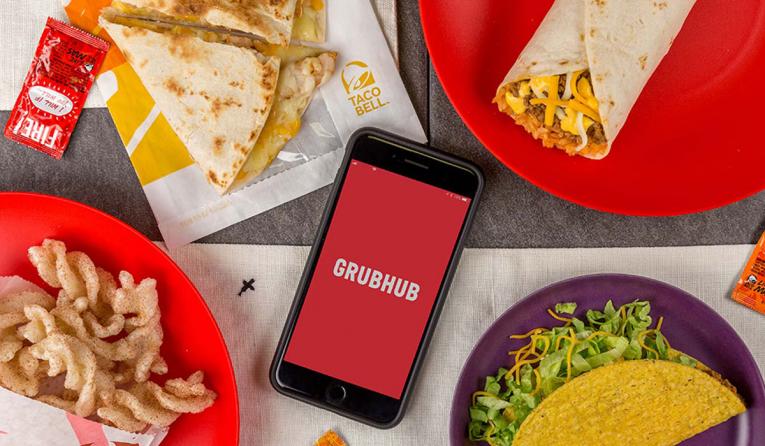 Taco Bell, in an effort to ensure faster delivery, integrated its point-of-sale system directly in the Grubhub app. Now, pickup is timed to the moment an order is ready. Delivery is available on Taco Bell’s site, where guests can plug in their zip code and be directed to Grubhub. They can also just go to Grubhub’s site or app.

Creed said the POS integration improved order accuracy as well. Getting that done was critical to the chain’s delivery rollout, which is why they didn’t jump out the gate with a massive amount of locations. “I would say we’ve gone a little slow early in order to accelerate going forward,” he said.

Creed added, “there’s no silver bullet” for why Taco Bell has been so effectively lately. “We are known as the innovation leader. As David [Gibbs] said, we're running great operations. The assets are in great shape. The franchisees like their restaurant-level margins. And so, I think when you add all that up, you just get a consistent performance for seven years that Taco Bell has delivered, and we believe will continue to deliver,” he said.

BTIG analyst Peter Saleh wrote in a Friday note, “For Taco Bell, a focus on value in the U.S. helped accelerate comps from 5 percent in 3Q18, with two-year stacked figures consistent at 8 percent. Looking ahead to 2019, we believe Taco Bell should benefit from delivery ... with a limited-time free delivery offer designed to raise awareness and adoption. Given that a free delivery promotion at Chipotle contributed to driving double-digit comps in December and into January, we believe this could be a meaningful promotion and sales driver for Taco Bell as well."

The challenges persist at Pizza Hut

YUM! has been candid about its struggles with the global pizza icon in recent quarters. Perhaps the biggest issue at hand is the gap between delivery and dine-in sales, and how the latter continues to drop. In addition, Pizza Hut went promotion heavy in Q4, rolling out deals like the $5 Lineup. The higher spending reduced operating margins to 33.1 percent from 38.8 percent.

The 60-year-old chain is in the process of updating and repositioning its asset base, and working on a more defined message, Creed said. But returning to the dine-in challenge, Creed said the gap between dine-in general sales and off-premises is “significant,” with both the U.S. and international seeing a roughly 10-point differential. About 40 percent of Pizza Hut’s units outside of the U.S. are dine-in restaurants, with predominantly dine-in sales. Roughly half of those are in China. 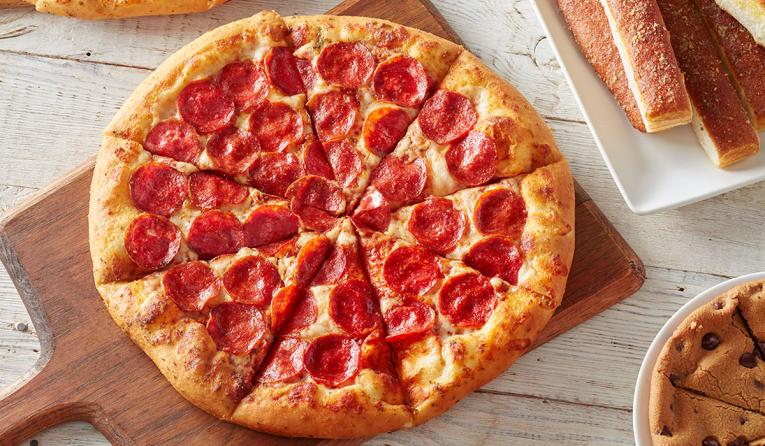 Pizza Hut wants to push its delivery over dine-in business, but it's going to be a slow churn.

This past year, YUM! found success, Creed said, leveraging its off-premises-focused asset options, including “Delco” units, fast-casual Delco models, and express locations. Combined, the modernized, take-out and delivery-focused restaurants represented 90 percent of Pizza Hut’s total net new units in 2018. Also, adding nearly 1,300 Telepizza locations in a deal closed in December that was first announced last May, will accelerate the transformation of Pizza Hut’s estate to a more off-premised-focused asset immediately. Telepizza agreed to add at least 2,500 units over the next 20 years as well.

In the U.S., Gibbs said, Pizza Hut improved average delivery times by 3 minutes. He acknowledged that Pizza Hut would continue to see headwinds, however, from the transition of its dine-in footprint to a more delivery-focused one. “That involves closing and opening stores,” Gibbs said. “And during that churn, we may see more closures perhaps than we anticipated in the short term at Pizza Hut.”

Pizza Hut witnessed solid rewards growth in 2018, too. The chain kicked off the program along with mobile app updates in late 2017. It now has more than 12 million active users in the loyalty program and expects to add more as Pizza Hut’s off-line channel gains momentum, Gibbs said.

The value emphasis, along with Pizza Hut’s first year as the official sponsor of the NFL, “improved the distinctness of our messaging,” Creed said.

“Pizza and sports go hand-in-hand and our partnerships with the players and teams should continue to bring the marketing to life,” he said. 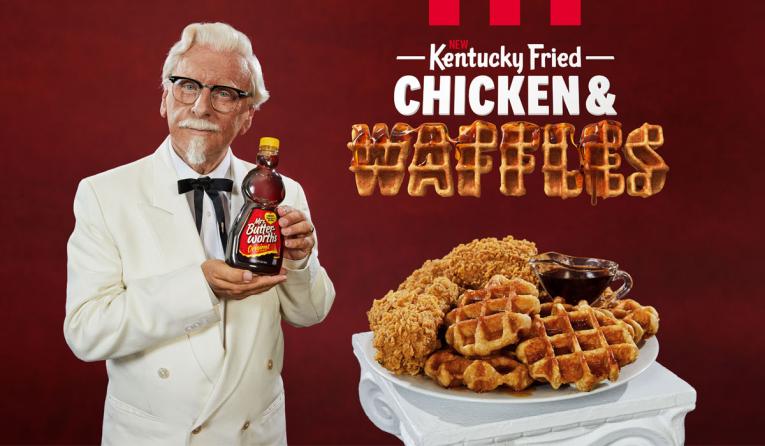 In Q4, KFC delivered system sales growth of 7 percent, with strong same-store sales of 3 percent (1 percent in the U.S.) and net new unit growth of 5 percent. There are 22,621 locations compared to 21,487 in the prior year.

Some interesting things to watch: While Taco Bell’s delivery launch was first, KFC’s is coming later this year, Gibbs said. YUM! also set a goal of 5,000 restaurant with kiosks and more than 70 percent on delivery by 2020. “Just as promising, these enhancements are occurring at the same time our franchisees upgrade and modernize existing assets,” Gibbs said.

The Missing Piece to Consumer Satisfaction in the Restaurant Industry
The Next Wave of On-Demand Restaurant Delivery
What are the Biggest Challenges with Implementing Dynamic Pricing?