Thanks to Chicken Sandwich, Popeyes is Making $400K More Per Restaurant

Can the fast-food chain keep it up in 2021? There's no reason to bet against it.

There was a statistic early on in Popeyes’ chicken sandwich saga that felt better suited for fiction. As social buzz rampaged throughout the sector, Apex Marketing Group estimated Popeyes reaped $65 million in equivalent media value—nearly triple the $23 million media value the sandwich generated in its first few days of sale.

While it feels ages ago, Peopeyes ran out of chicken sandwiches by the end of that August, just two weeks after launch. It sold as many in 14 days as it expected to through September. Individual restaurants reported serving 1,000 chicken sandwiches per day. A June report in Ad Age said Popeyes’ tweet (the now-infamous Chick-fil-A challenge) earned more than 20 billion impressions worth some $220 million. By the time 2019 closed, Popeyes had more than doubled its Twitter following and had so much word-of-mouth momentum it canceled an ad campaign scheduled for Labor Day.

Popeyes tried to catch its breath. It wasn’t exaggerating when it called the chicken sandwich its biggest launch in three decades—from a sheer development perspective. That didn’t even factor demand.

Popeyes same-store sales skyrocketed 10.2 percent in Q3 2019, a period where the chicken sandwich was in stores for a mere two weeks of the entire quarter.

With supply issues fixed, it returned November 3 (on a Sunday, of course—another competitive tip to Chick-fil-A) and Q4 sales ended up rising 37.9 percent, year-over-year.

In the second half of March, when COVID-19 pulled the plug on restaurants nationwide, Popeyes’ same-store sales ran flat versus prior-year levels. Nothing more than a blip, though. By the time the quarter ended, Popeyes’ Q1 comps were up 26.2 percent compared to 2019. And from the end of March to the third full week of May, Popeyes surged into the low-40s as customers ventured back to the drive thru. Unsurprisingly, they ordered the chicken sandwich from their cars as rabidly as they did sitting in dining rooms.

Popeyes’ figures lifted 19.7 percent in Q3 and then, announced this week, declined 6.4 percent in Q4. This latter result is hardly a sign the chicken sandwich has seen its heyday. You have to factor in Q4 2019’s 37.9 percent lap to get perspective. Essentially, Popeyes achieved 94 percent of last year’s jaw-dropping sales, despite the fact we’re still in a global pandemic.

Even without the COVID reality, doing so would have been impressive considering the marketing that ignited last summer’s performance.

But one thing we can do now is take stock of the chicken sandwich’s wider impact. Popeyes’ 2020 systemwide sales increased nearly 18 percent to more than $5 billion, driven by a lift in global comparable sales of 14 percent, and net restaurant growth of 4 percent. This with Q4 systemwide figures decreasing about 1 percent thanks to the comps decline (net restaurant growth was up 4 percent in this period as well). In Q4 2019, systemwide sales rose 42.3 percent, year-over-year. So, again, a 1 percent decline, while in the red, is nothing to scoff at.

But while double-digit unit net growth is part of the story, it doesn’t fully explain the sales surge. Rather, it’s what’s unfolded between 2019 and 2020. Popeyes today generates an average of more than $1.8 million in sales per restaurant, company CEO Jose Cil said Thursday. Before the chicken sandwich, it was $1.4 million.

The chicken sandwich wasn’t just a marketing success for the storybooks; It helped push $400,000 in added sales, per restaurant, across Popeyes’ entire mature base.

Just going off 2019 figures, $1.8 million ranks Popeyes 13th among the top 50 highest-grossing quick-service chains in the country in terms of AUV, behind El Pollo Loco and ahead of Panda Express. It was 20th last year. 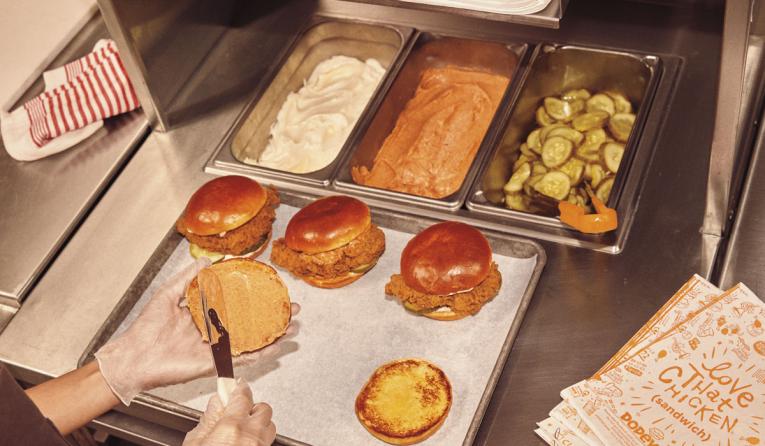 Popeyes' chicken sandwich was two years in the making. Chefs in Popeyes’ Miami test kitchen developed a new buttermilk batter for the product and tracked down a special flour to create its crunchy texture.

“Popeyes U.S. has been in an incredible run since the second half of 2019,” Cil said simply.

He added Q4’s sales continued at “very strong levels,” compared to last year, thanks to “sustained sandwich business” and success across the menu, especially with group and family occasions. “In January, we continue to lap the early days of the relaunch of Chicken Sandwich, but the business is back to flat and continuing to perform at healthy nominal levels,” he said.

Returning to early chicken sandwich days, market intelligence firm Numerator tried to capture some future implications. What it found was the product brought in visitors with unique characteristics versus Popeyes’ typical buyers. Namely, younger, more affluent diners from larger households compared to average customers. As this below graph illustrates. 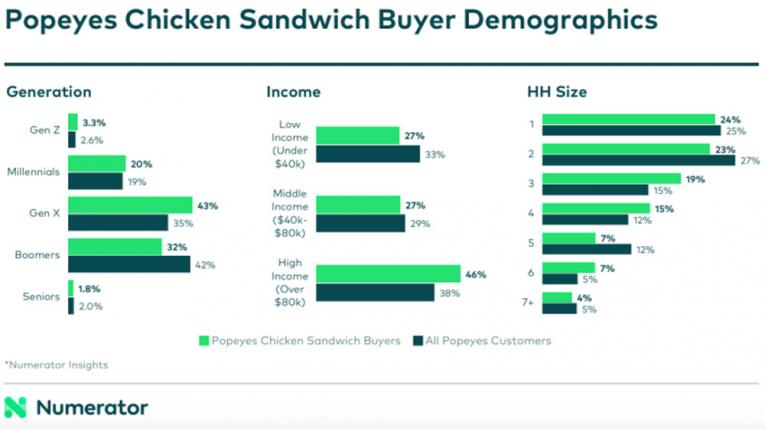 Numerator also discovered about 30 percent of Popeyes’ new chicken sandwich fans were purchasing crispy chicken sandwiches at other quick-serves in the weeks prior to trying it. Post-launch, further share went to Popeyes and Chick-fil-A at the expense of others, including McDonald’s.

Put another way, it not only inspired new customers, it also successfully pulled guests from category competitors. More than half (51 percent) of non-buyers during Popeyes’ shortage period said they went to the chain with the intent to buy it.

And this is where the heart of the so-called “chicken sandwich wars” started beating. If not to get in on the gold rush’s ground floor, then to not let a chicken sandwich be the reason you ceded customers to Popeyes and Chick-fil-A.

McDonald’s, as well as Popeyes’ sister brand Burger King, are among the chains preparing to launch new sandwiches in 2021. Countless others did so in 2020, from KFC to Zaxby’s to Boston Market. This doesn’t even factor the endless virtual wing and tender brands flooding the market.

Aligned with Numerator’s data, Popeyes’ chicken sandwich was a gateway product. Cil said Thursday, “a large part of this growth is attributable to the Chicken Sandwich, but we continue to see significant growth across every category of our menu,” echoing a statement he’s made previous. “The compelling unit economics and the consumer demand for more access to the brand have created a tremendous amount of appetite for new development.”

Like RBI’s other brands, COVID opened accessibility to Popeyes and could help it scale once the dust clears. Digital accounted for 16 percent of total sales this past quarter, which was double the figure at Burger King. Delivery was three times greater than 2019.

One underlying detail to remember is that, in Q1, leadership said digital orders represented about 15 percent of Popeyes’ sales, while 20 percent of its delivery flowed through the brand’s white-label app. On Thursday, COO Josh Kobza listed the program, where delivery comes in via its app or website and is fulfilled by third parties, as a key directive for 2021. The data implications are significant.

Popeyes will be able to send more targeted communications to guests and augment its digital abilities. One of the ways Popeyes was successful promoting its chicken sandwich was through shared mail, where it inspired trial. There are simply more marketing tools at the ready now to compound that method, thanks to higher digital adoption brought on by lockdown behavior.

Also on deck is the same drive-thru modernization currently rolling across Burger King and Tim Hortons. RBI said Thursday Popeyes would get digital menuboards and other improvements, including, potentially, intelligent selling technology, installed at the majority of restaurants in 2021.

Needless to say, as long as demand remains strong, and there’s nothing to suggest it won’t, Popeyes hasn’t plenty of levers still to pull this year and beyond, with fresh markets to enter and a global empire to build.