After one of its best growth years in decades, the burger chain doesn't expect to miss a beat in 2022.

Breakfast, digital, and the company’s highest net new growth in two decades, carried Wendy’s to what CEO Todd Penegor called a “breakthrough year” in 2021. So how will the encore unfold? Penegor doesn’t see much of a slowdown on the horizon.

Wendy’s delivered 121 net new restaurants last year, which marked six consecutive calendars of positive gains and, as noted, the highest figure in nearly 20 years. But a detail that speaks to the future, and how COVID shaped it, is the fact roughly 50 percent of growth is coming via nontraditional means. In one example, Wendy’s opened 30 REEF Kitchens across the U.S., Canada, and U.K. in 2021. These delivery venues boast average-unit volumes in the $500,000 to $1 million range, with Wendy’s collecting about a 6 percent royalty rate income compared to its typical collection of 4 percent (the higher number results in similar economics for Wendy's, despite the lower AUV).

For some time, Wendy’s has touted being underpenetrated in major urban markets. “Dramatically” so relative to its peer group, Penegor said. REEF provides a clear path in. Wendy’s has a development commitment in place today to do up to 700 of them. In 2022, it expects to debut 150–200 globally—about 65 percent in the U.S.; 10 percent in Canada; and 25 percent in the U.K. “These kitchens are designed and operated solely as Wendy’s locations and are operated the Wendy’s way,” Penegor said.

CFO Gunther Plosch said Wendy’s expects nontraditional development—REEF included—to continue mixing 40–50 percent of the brand’s path. And this is a significant view into what Wendy’s could look like in a few years. The brand’s net new growth last year came in at about 2 percent. Even with supply chain impacts causing delays, Penegor said, Wendy’s has now opened all of the restaurants hit by setbacks in 2021. Yet a “meaningful step change” is on deck for 2022—Wendy’s expects full-year net new growth of 5–6 percent in 2022. Also, 72 percent of all Wendy’s units have been reimaged.

The company recently launched its “Own Your Opportunity” campaign to boost the diversity of its franchise system, which creates competitive liquidity and net worth requirements for new applicants. Wendy’s is adding resources with a focus on recruiting operators, and has developed financial programs and partnerships with banks. It became a mission partner at First Women's Bank, the only women-founded, women-owned, and women-led commercial bank in the U.S.

The way Wendy’s operates by then isn’t going to mirror 2019, either. Not physically (new models and off-premises-focused assets) or in the way it drives revenue.

Wendy’s same-store sales grew 6.1 percent in the U.S. in Q4 (9.2 percent for the full year and 11.6 percent on a two-year Q4 basis) and 7.3 percent globally. The latter represented Wendy’s 11th straight calendar of growth.

Price played a role in the comp, too, as Wendy’s stayed slightly below food-away-from-home inflation, Plosch said. The company priced about 6 percent in Q4 and expects to go north of 5 percent in 2022. “We’re going to watch value and value perception,” he said. “About 30 percent, 35 percent of our consumers are making less than $45,000 a year. So we need to make sure that we are striking the right balance and maintaining value perception.”

Part of what propelled the overall result for Wendy’s isn’t a new topic, but the arc of it has begun to change. Wendy’s breakfast business—launched on the doorstep of COVID in March 2020—reached 8.5 percent of U.S. sales at its peak in Q4 before balancing at 8 percent for the period. Penegor credited a “very successful biscuit promotion” (the brand’s Buck Biscuit offer) and its “global digital acceleration.”

Even with inflationary pressures, these levers, alongside higher average check and an increase in customer counts, as well as price, led to company-operated margin expansion of nearly 200 basis points to 16.7 percent. And this with about 15 percent of dining rooms still closed at any point in time during Q4. “If you think about what we did on our hot and crispy fries, meaningful increases in fry attachment incidence rates in the fourth quarter, it’s really helped us drive our customer count, while maintaining the check,” Penegor said of the brand's August fry innovation. “And we saw really meaningful increases in our overall liking and repurchase intent on the fry business, and that’s a gift that can keep giving.” 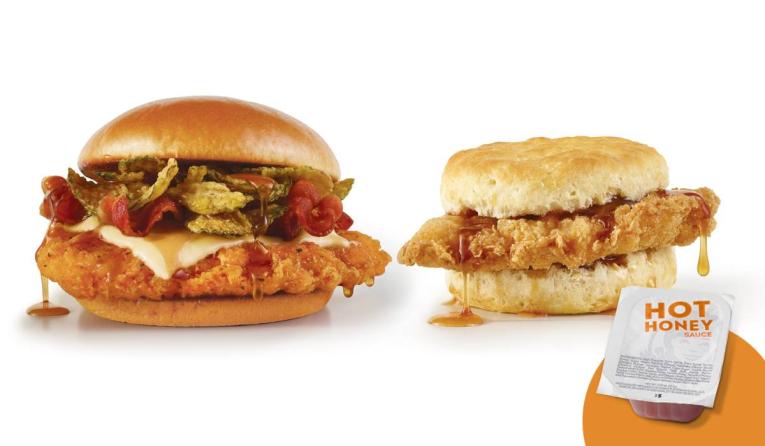 Menu innovation will play a key role in Wendy's breakfast efforts this year.

For breakfast, Wendy’s made good on its promise to emerge from 2020 on the marketing offensive. Promotions drove “significant trial” in Q4, Penegor said, which was clear through a meaningful increase in buyer penetration. Breakfast awareness, which held at about 50 percent through the early months of COVID, reached “record levels,” he added.

“This culminated in another quarter of morning meal traffic share growth in the [quick-service restaurant] burger category,” Penegor said.

In other words, Wendy’s gained ground on McDonald’s and Burger King.

The chain grew breakfast sales by about 25 percent last year. Trial-driven campaigns, continued increases in customer repeat, two additional months of the daypart (given it didn’t launch until March the previous year), and the support of Wendy’s $25 million incremental investment in breakfast advertising, moved the needle, Penegor said.

In 2022, Wendy’s will support growth through menu innovation, like the Hot Honey Chicken Biscuit. While marketing is coming down to $16 million, trial-driving offers aren’t going anywhere. Penegor believes breakfast, stateside, will accelerate by about 10–20 percent, taking average weekly U.S. breakfast sales to $3,000–$3,500 per restaurant by year’s end.

Penegor said Wendy’s will shift aim to dollars per week as a success metric versus percentage of sales (the previous aim was 10 percent of mix). Additionally, the chain will soon launch breakfast in its largest international market—Canada—in Q2, bringing breakfast coverage to about 95 percent of Wendy’s global system.

The playbook in Canada will look much like the U.S.: minimal franchisee investment, familiar items and biscuit-focused options, and company advertising support.

Already, Wendy’s spent more than $1 million in Q4 to ensure the launch cleared. The end result, like the U.S., should provide a roughly 3–4 percent lift to international same-store sales this coming year.

Of the $16 million Wendy’s set aside for incremental breakfast advertising in 2022, $5 million will go to Canada.

One important example to note is what’s taken place at legacy restaurants that offered breakfast pre-2020 introduction. Those stores, Penegor said, are running north of $4,500 per week. “And those are the restaurants that had a little more reps on how you manage breakfast operationally, put a lot more time to ingrain the habit and the communities that they serve, which gets us really excited about where the growth can continue to go,” he said.

In the $3,000–$4,500 per restaurant realm, breakfast clocks in significantly above breakeven profitability, Penegor added. That historically was the final blow with past attempts.

“We think there’s a lot of leg room, a lot of opportunity to grow the breakfast in the future,” he said. “As morning routines come back, as folks start to routine move back into the office a little more, kids all getting back into school, all of those things … continue to drive our business quite hard. And the disruptive promotions do get folks’ attention. It allows us to talk about the Wendy’s brand and talk about the quality at a very great price point, and it does drive a lot of people in for trial.”

Breakfast traffic in Q4 returned to pre-pandemic levels. Customer mobility is bouncing back, albeit a little later in the morning. Peak hours, Penegor said, are coming in the last two hours of the block.

Meanwhile, Wendy’s international digital sales mix exceeded 15 percent. In the U.S., it eclipsed 9 percent in December, thanks mainly to mobile ordering and delivery.

The brand’s loyalty program, launched in July 2020, grew total members by about 75 percent over the course of 2021. It expanded monthly active users by 25 percent.

For the full fiscal year, Wendy’s digital sales growth jumped 75 percent compared to the prior 12 months. It saw more active users and higher average checks across all digital platforms.

Penegor said Wendy’s will keep pushing customers into its app with compelling offers.

It’s a critical element given Wendy’s pace of innovation against the labor market. Curbside, while it will continue, has proven a labor strain on the brand’s digital experience. “And we’re really trying to get folks to move to mobile grab-and-go and putting some racks in the restaurants to make it a little bit easier operationally for our teams in the restaurant,” Penegor said.

Operations tablets continue to roll out to help Wendy’s automate menial tasks around scheduling and inventory management ordering in the back of the house.

The more customers who tap mobile ordering, the better. It takes pressure off of the order point and speeds payment, Penegor said. “All of those things are all little things that add up to make the restaurant more operationally efficient,” he said. “And we’ll continue to lean into what the flow of the restaurant looks like, not only for today but into the future as we drive more folks into digital.”

Another executive call-out was Wendy’s ongoing investment in a double-sided grill. The brand will transform about 40 percent of its grill footprint in company units this year before finishing up in 2023. About a third will be converted at that point. Plosch said the update, which cooks faster, juicier burgers, should lead to increased sales since consumer satisfaction should increase in tandem. “It also will drive some labor efficiencies,” he said.