Wendy's Gets Ready for the Breakfast Rush

The fast-food chain plans to drop as much as $80 million in marketing to promote awareness.
Fast Food | February 2020 | Danny Klein

Wendy's breakfast will run through the drive thru, a decision that helps with labor.

Just how serious is Wendy’s about breakfast this go around? The company told investors it’s dropping between $70 million and $80 million on advertising alone over the course of 2020 to promote awareness. And that’s incremental spend; Wendy’s still plans to fund lunch and dinner campaigns like it usually does. In total, the chain’s media rates will run about 30 percent higher than they are today.

Wendy’s corporate will provide $40 million to $50 million of that figure, with franchisees covering the rest.

Now the question becomes, can Wendy’s grab in the range of $700 million in breakfast sales and get operators near breakeven? And do so as competitors ratchet up marketing, value, and menu innovation to stymie Wendy’s penetration into one of fast food’s most hotly contested battlegrounds?

In the meantime, one thing is certain: Wendy’s is giving this initiative all its got.

The company said earlier it would make a one-time, upfront investment of $20 million to prepare for launch, which is all set for Monday. It spent $17 million in Q4 and plans to flow the remainder into 2020. Much of that capital funded recruiting campaigns—Wendy’s estimated it would take 20,000 or so employees to execute its breakfast hopes.

CEO Todd Penegor said during the company’s Q4 and full-year review this week the system “is fully staffed and trained.”

“We are ready to launch what we believe will be America’s favorite breakfast nationally across the U.S. on March 2,” he said.

Wendy’s is looking at the process through a three-year lens, and doesn’t expect the daypart to be profitable in 2020. That could change as soon as the following year, though, CFO Gunther Plosch said. Breakfast is predicted to generate $600 million to $800 million of system sales in 2020, equating to a 6–8 percent comp benefit and roughly $2,300 in weekly business per store.

BTIG analyst Peter Saleh noted Wendy’s current weekly sales assumptions run below prior breakeven levels of about $3,000 per week for franchisees experienced in 2010–2012.

And, in the end, breakfast stalled somewhere around 600–700 restaurants.

This is really where the key change in 2020 takes aim. Wendy’s mentioned multiple times in its quarterly call that 2020’s approach to breakfast centers on simplicity. There are fewer items and its designed as a drive-thru only setup. The latter helps with labor—Penegor said previously breakfast would take just three people per restaurant to staff, and block scheduling could Wendy’s improve levels through lunch, too.

“While we expect leverage on fixed costs such as rent, we do believe other expenses such as utilities [4–8 percent of sales) and credit card fees [1–2 percent of sales] could make it more difficult to achieve breakeven,” Saleh wrote.

Penegor said Wendy’s spent more than two years preparing for Monday’s launch. Another important change from past attempts, the brand is going into the effort with nearly its entire system in tow. Of the 5,850 or so restaurants in the U.S., only 80 opted out. Wendy’s gave the opportunity to restaurants in “a unique location,” Penegor said. And there is an option in the agreement, on a case-by-case basis “on a very exceptional basis,” Plosch said, for franchisees to abandon breakfast if they couldn’t make it work. Penegor added that will be a restaurant-by-restaurant decision, not a franchisee-by-franchisee one.

"We’re absolutely committed to this daypart, so we’re very much committed to spend those kind of dollars during the course of this year," Wendy's CEO Todd Penegor says. 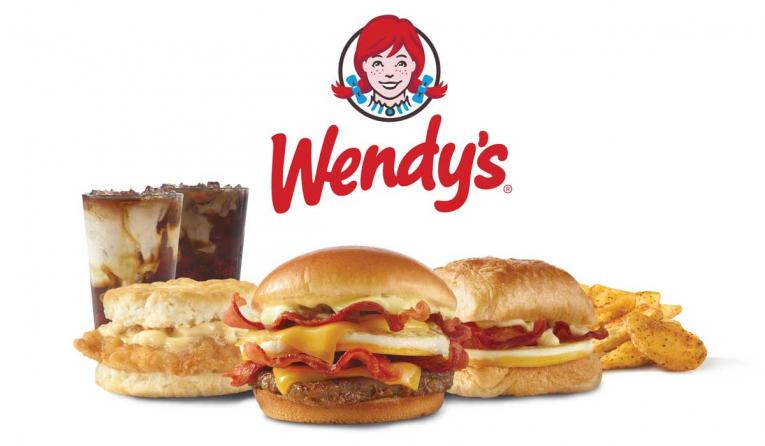 Wendy's is fully staffed ahead of Monday's breakfast launch.

Beyond the technical measures, Penegor said, Wendy’s will define its breakfast success across a variety of metrics. Speed of service will be critical, he said. So will consistency and high-quality food that “ingrains the habit,” so guests want to add Wendy’s to their morning routines.

Again, this is something the chain believes will take multiple years. And it’s why Wendy’s is pushing so many incremental dollars into breakfast instead of simply shifting its spend. That’s also intended to guard against a concern from the 2010 push, which was cannibalization on lunch and dinner sales. Wendy’s is not reducing its lunch and dinner marketing budgets as the result of breakfast.

Plosch said cannibalization really hasn’t been an issue in the 300 test stores. It switched old breakfast offerings to new and saw a couple of optimistic trends emerge: Happier crews due to a simpler menu, and a slight rise in sales in line with no additional marketing.

“The great news is it’s all incremental dollars that we’re bringing to the party,” Penegor said. “We’re going to have more media pressure out there. We’re not stealing from lunch or dinner. So we’ll not only be able to showcase breakfast, we’ll continue to be able to keep our nice support on lunch and dinner in all of our messaging. We’ll have a great halo to fresh, high-quality food that Wendy’s continues to deliver. If sales came in a little bit softer, we’re not going to flinch. We’re absolutely committed to this daypart, so we’re very much committed to spend those kind of dollars during the course of this year.”

But the most-critical directive, Penegor said, was getting fully hired before launch. “A lot of folks didn’t think we could hire the staffing for that breakfast daypart and get fully trained. And our teams are energized and excited and our systems are all-in behind breakfast to drive great execution, so we will make sure that we create a great first impression with all the trial that we have as we launch into the breakfast daypart,” he said.

Penegor added franchisees are set up to make money from day one, thanks to the upfront cost and hiring support aided by Wendy’s corporate. The chain paid for the menuboard work. Operators just had to hire and train.

Wendy’s put value up and down its breakfast menu, which highlights some classics in new form, like the Breakfast Baconator and Frosty-ccino. There’s nine sandwiches in total—three on croissants, including two with eggs (sausage, egg and Swiss cheese or a bacon, egg, and Swiss cheese), and a maple bacon chicken croissant. Other eggs sandwiches will be sold on biscuits and classic buns. There’s a honey butter chicken biscuit as well.

Additionally, Penegor said, Wendy’s built its breakfast economic model around a promotional calendar designed to drive trial. “And you will see this week we had a national coupon drop that you probably picked up in your mail just today or yesterday. We’ll continue to monitor the competitive situation and make sure that we’re competitive and we’ve got those plans in place,” he said. One current example includes free coffee with the purchase of an item.

“So fastball down the middle, all SKUs that will move nice and strong, and importantly, high-quality. Fresh cracked eggs on all of our sandwiches every single day,” Penegor added. 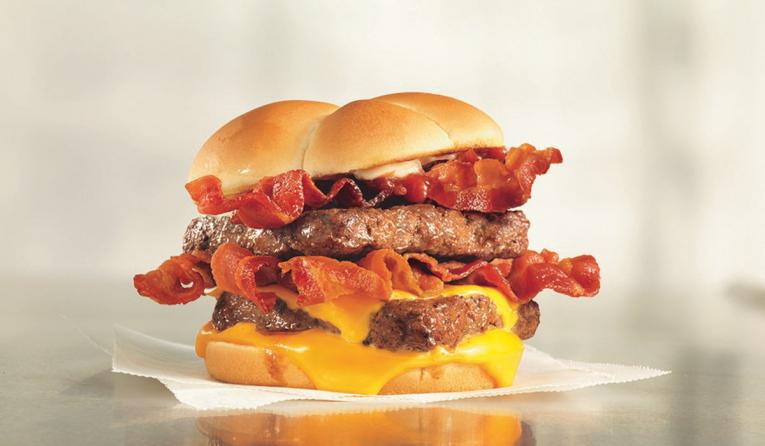 The Baconator in breakfast form? It's coming.

Wendy’s finished the year with same-store sales growth of 4.3 percent at North America locations. It lapped a 0.2 percent in the year-ago quarter.

Quarterly revenues came in at $427.2 million, up 7.4 percent versus 2018. Global systemwide sales, including company and franchised locations, were $2.8 million, a rise of 5.9 percent. Quarterly operating profit was $36.7 million, down almost 20 percent. However, net income of $26.5 million jumped 41 percent from $18.8 million in 2018. The increase primarily driven by a cash settlement related to a previously held investment, partially offset by a fall in operating profit and a higher provision for income taxes.

Wendy’s also recorded 2.8 percent comps growth for the full year, which Penegor said was one of the brand’s best results in the past decade.

In 2019, 2.5 percent of Wendy’s U.S. sales flowed through digital channels, double that of year-end 2018. The chain plans to expand delivery this year by adding Grubhub and UberEats, along with current provider DoorDash.

Additionally, the brand said it plans to more than double its net new restaurant openings internationally in 2020 as it looks to double system sales to $2 billion by that same date. The company opened net 77 global restaurants this past year (29 international and 48 North America).