Unit growth is picking up across the burger chain's system.

Inflation and higher prices are hardly a Wendy’s-specific story. And either is the consumer segmentation forming out of it, which CEO Todd Penegor said Wednesday was “roughly the same across all of [the quick-service restaurant industry]."

In recent data from Revenue Management Solutions, more than 50 percent of polled Gen Z and millennial consumers said they felt they were paying “higher” or “much higher” prices at restaurants these days. For Gen X and Baby Boomers, it was 74 and 78 percent, respectively.

Average checks in April, within quick service, climbed 7.2 percent, year-over-year. How it breaks down, though, is where the conversation has moved: 9.4 percent from higher prices offset by a basket size decline of 2 percent—smaller and more individual orders as dine-in replaces some digital orders, coupled with pricing movement on the top line.

Historically, roughly a third of the chain’s guests earn $45,000 or less per year. The same is true broadly of fast food and echoed in recent weeks by McDonald’s, Burger King, and others, with McDonald's CFO Kevin Ozan saying the brand was "certainly [keeping] a close watch on lower-end consumers just to make sure that we're still providing the right value ..."

Yet to date, healthy activity from “the folks making over $75,000,” has helped Wendy’s hang in, Penegor said.

Wendy’s U.S. same-store sales gained 1.1 percent in Q1 against 2021’s lap of 13.5 percent. Globally, the brand achieved its second consecutive period of double-digit two-year comps at 15.4 percent following “one of our best quarters of all time in the prior year,” Penegor said. It marked an acceleration versus Wendy’s Q4 on a two-year basis. Internationally, the chain’s same-store sales gained 14.1 percent, which helped push the systemwide figure to 2.4 percent. Wendy’s also opened a net of 67 locations (45 domestic) as it tracks toward unit growth of 5–6 percent for the year.

The growth figure was a significant bump from Q1 2021 when Wendy’s expanded by a net of 10 stores, including four stateside. “We achieved one of our best quarters in our history for unit growth,” Penegor said.

However, inflation reared through Wendy’s quarterly recap. Company-operated restaurant margins fell to 11.6 percent of sales (versus 17 percent a year earlier). The brand credited bad weather early in the quarter, which led to customer count declines; Omicron setbacks; commodity and labor inflations in the high- and mid-teens, respectively; and leftover stimulus benefits from last year; as well as the impact of Wendy’s investments to support entry into the U.K.

Wendy’s was able to partially stem challenges with higher checks driven by pricing, CFO Gunther Plosch said, which was “just below food-away-from-home inflation of 5–6 percent.” McDonald's was at about 8 percent last quarter, for comparison.

Furthermore, Wendy’s expects company-operated restaurant margins of 14.5–15.5 percent for the year thanks to commodity inflation it believes will run in the mid-teens for the full calendar. So pricing at Wendy’s will now lift from mid-single, as guided earlier in the year, to mid- to high-single digits, Plosch said.

“We think we have actually more pricing power left,” he said. “If, obviously, inflationary pressures are going to accelerate further, we will be stepping in to take more price.”

Plosch said Wendy’s strategy, however, will continue to operate from a long-term view—court traffic and keep the brand’s high-low menu offerings attractive at both points. Additionally, keep incentivizing digital though app offers and other deals.

Wendy’s “one more visit, one more dollar,” strategy, which it’s deployed for years, still resonates in this climate, Penegor said. The company’s 4 for $4 and $5 Biggie Bag remain value platforms Wendy’s can innovate against and generate new news around, versus trying to introduce and market LTOs and deep-discounted products that fall outside the core.

Use 4 for $4 to get guests in, trade them up into the $5 Biggie Bag. Then, keep leaning into premium innovation with Made to Crave at the top of the barbell. “We will also continue to have some great news on the rest of the daypart to drive a lot of innovation to move our business forward—speed, convenience, affordability of why folks continue to come back to [quick service],” Penegor said.

“We say that consistently time and again. But we’ve done a lot of work to really differentiate around the quality of what we deliver in the restaurant,” he adds, mentioning Wendy’s hot and crispy fry guarantee, as well as the double-sided grills its rolling into corporate locations, which improve cook times.

Plosch added Wendy’s understands which part of its menu is more elastic to price. “I can tell you, our flow-through rate on pricing is pretty high,” he said. “It’s about 85 percent.” This has become a common quick-service thread as well. McDonald's pricing likely took place among premium and mid-tier products, BTIG analyst Peter Saleh said. In turn, "some consumers are trading down within the menu, opting for more value-oriented items," he noted. "This is the first time in many years that McDonald's has highlighted such a change in consumer behavior, which could be a harbinger of further traffic declines."

Wendy's comment about guest count declines in one consumer bucket versus another, Saleh said, suggests reduced frequency for the vast majority of customers. Although he added that’s “consistent with the trends experienced across most of quick service, including pizza, wings, and other hamburger concepts."

It's a point Penegor made Wednesday. Even with traffic in the red, Wendy’s stretched its streak of growing or maintaining category burger dollar share to 11 quarters, which speaks to the bigger picture and how the brand is holding fort.

"[We'll] do the things that we need to do on the innovation front to continue to keep our menu fresh and on the top of mind for consumers to come in," he said, "and even drive things like the buck biscuit trial promotion that was in the market to start the year to make sure that we can continue to have our customers' backs, bring them in, make sure that we’re focused not only on driving dollar sales, but driving traffic." 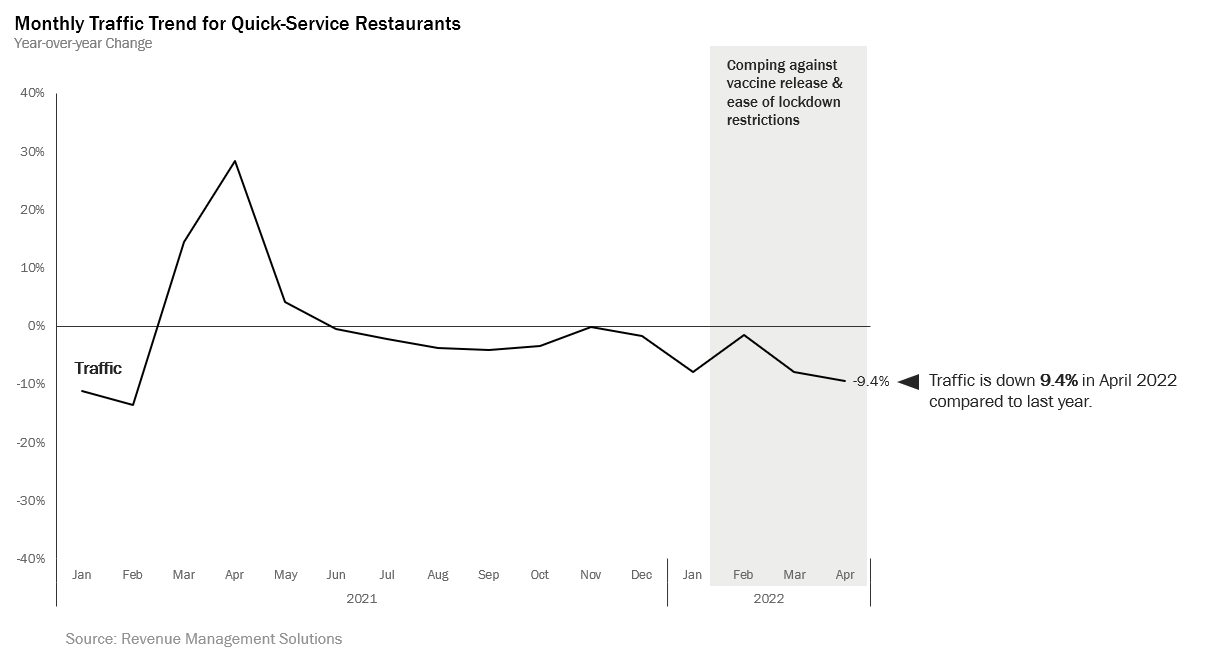 In addition to Omicron and guests staying home due to winter weather, Penegor said consumers had to adjust to high inflation, especially at the fuel pump “when they filled up for the first time in March.”

“I think some of those dynamics had a bigger impact, outsized impact on traffic in the category in Q1,” he said.

RMS’ data also showed a 13.4 percent decline in drive-thru traffic April over April, which the company credited to gas prices and their typical link to drive-thru performance.

In Q4 of last year, 91 percent of Gen Z respondents reported at least one weekly drive-thru visit in RMS’ poll. When asked in Q1 2022, it decreased to 81 percent. Looking ahead: the share of Gen Zers planning on ordering “more” or “much more” from drive-thrus significantly declined from 34 percent in Q4 2021 to 12 percent percent in the first quarter of this year.

As summer approaches, Penegor said, Wendy’s relative value food-at-home versus food-away-from-home could supply another counterpoint. It’s currently enjoying a gap north of 300 basis points. Indeed, it’s a conversation where quick-serves are finding leeway. The food-at-home index in April, per the BLS, increased 10.8 percent, year-over-year, the largest 12-month increase since November 1980. The index for meats, poultry, fish, and eggs grew 14.3 percent over the last year, the largest 12-month rise since the period ending May 1979.

That’s well ahead of the overall food-away-from-home index bump of 7.2 percent in April. Another potential quick-serve differentiator—full-service meals climbed 8.7 percent, which marked the segment’s highest increase since 1997 and also represented the second month in a row the category saw greater year-over-year inflation than quick service. The last time that happened? March 2020. 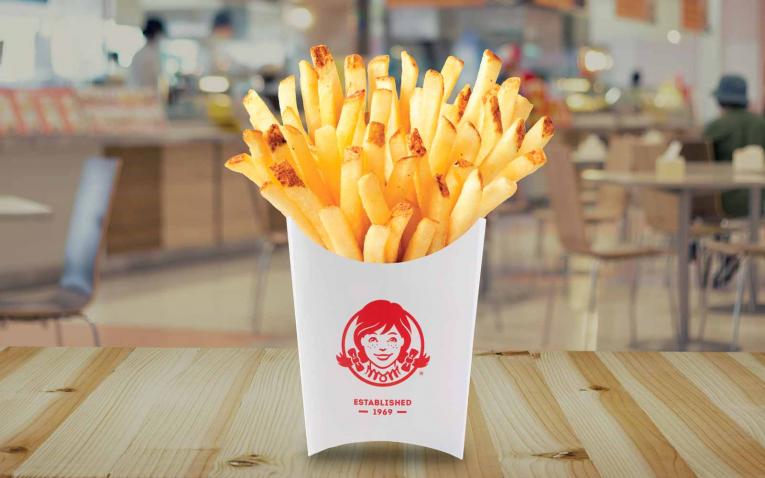 Reflecting RMS’ breakfast data, Wendy’s early daypart accounted for about 7 percent of sales in Q1, down from 7.8 percent in Q4 2021 and 7.3 percent throughout last year. Average weekly breakfast sales came in at $2,500 per restaurant. Wendy’s remains committed to reaching $3,000–$3,500 per store and said legacy locations (those that offered breakfast before the 2020 launch) are sitting in the $4,000–$4,500 range, or more than 10 percent of sales.

Wendy’s launched a $1 Breakfast Biscuit promotion to generate interest, which has proven effective previously. Saleh wrote in a note Thursday, given the softening in traffic trends among lower-income customers mentioned earlier, “we believe it might be necessary to continue to innovate and introduce new breakfast value offerings with significant media support to achieve those targets.”

“While we expect Wendy's to continue to take price to support margins, we believe more aggressive value promotions across dayparts could weigh on margins,” he added.

Penegor said, despite recent challenges, he’s confident Wendy’s will hit the low-end of its goal to grow breakfast sales by 10–20 percent for the full year. The brand also launched the daypart in Canada last week.

As for what slowed the category exactly, it wasn’t all that different than the overall theme. Omicron early in the quarter impacted mobility, and so did weather, Penegor said. “There is some seasonality every year to breakfast,” he noted.

The biscuit promotion has brought guests back as Wendy’s moves out of the winter months and routines pick up again, Penegor said.

Plosch added the plan for breakfast, on the U.S. corporate said, is to have no additional investment in 2023. “We absolutely believe it has enough sales to stand on its feet,” he said, adding Q1’s results were “a little bump” more than any long-term concern.

Something to keep an eye on as well, Penegor said, is how inflation stretches not just to grocers, but to C-stores. He expects prices there will rise alongside, which offers Wendy’s further opportunity to promote relative value and back it up with integration C-stores generally cannot. Channels like drive-thru and mobile ordering (Wendy’s has been adding racks to restaurants to take pressure off the former).

“We know it’s still our highest customer satisfaction daypart,” Penegor said of breakfast. “We have got great speed of service. We know we get good repeat when we drive the trial to that breakfast daypart. So we are feeling very optimistic that as folks get out and look at convenience of a hot quickly prepared breakfast on the go, that we can serve that need quite nicely moving forward.”

He also hinted Wendy’s innovation is going to target the habitual nature of breakfast as well as “more of the all-family rather than just an individual that’s headed into the officer in the morning.”

“Our awareness levels are in a great spot. They continue to be right there with where Burger King is—has been in the industry in the breakfast business for over 30 years,” Penegor said. “So we feel good about that. We just got to continue to make sure that we build the routine, which we are feeling good that we have got the tools in place to make that happen to have a very successful business that grows for the long-term.”

In regard to digital, Wendy’s mix now rests at about 10 percent in the U.S. Penegor said Wendy’s March Madness promotions resulted in. more than a 10 percent increase in total and active users versus Q4. The brand’s partnership with REEF to build delivery-only kitchens has spread to 60 locations as they open in the U.S., U.K., and Canada.