Why Coronavirus Will Spark a Fast-Food Takeover

An era of quick-service chain-dominated growth could be coming.

Before mid-March, when COVID-19 began its assault on restaurant sales, the industry was tracking toward a fate akin to retail. From 1970–2015, malls boomed at twice the rate of the population. The eventual outcome—a landscape with too much retail and too few customers. When ecommerce entered the equation, it tipped already delicate scales.

But resulting closures weren’t so much an apocalypse as they were a course correction. It forced big-box and independent retailers to reinvent themselves around guest experience and a changing customer.

As we approached 2020, according to The Wall Street Journal, restaurants were suddenly growing at twice the rate of the population as well. While expansion crawled in the past two years, the number of restaurants jumped close to 16 percent in the previous 10, per the Bureau of Labor Statistics. Essentially, from the Great Recession to 2018.

In the same data, the number of restaurant workers increased by 2 million. From 2010–2018, restaurants accounted for one out of every seven new jobs—to give you a sense of the inflation.

Supply was outpacing demand. And so bankruptcies started to proliferate the restaurant world against an oversaturated backdrop. Just like retail in 2008, though, we weren’t witnessing the end of a sector; we were observing “bad” brands get innovated off the map.

COVID-19 introduced a new character to this drama, one that’s actually benefited a lot of quick-service restaurants. Domino’s in May reported a “material increase in U.S. same-store sales,” to the tune of 22 percent from April 20 to May 17. In normal times, a 20-percent plus year-over-year increase would stun the public restaurant sector (unless you were behind the Popeyes chicken sandwich).

Yet Domino’s pushed double-digit comparable results all the way from March 23 on. CEO Ritch Allison called this “a tailwind,” as opposed to some long-term shift in the chain’s business. Consumer behavior during the pandemic leaned toward delivery and carryout, and it provided a jolt to brands that specialize in it. Especially those with long, ingrained consumer habits around off-premises and guest databases to incentivize future visits.

However, Allison admitted, Domino’s had no real clue whether this trend would continue throughout the remainder of Q2, let along six months or a year from now.

Along with a shift toward delivery, curbside, and takeout, many quick-serves enjoyed a bump from what could be labeled a short-term course correction. Temporarily closures, permanent ones, and simply a lack of off-premises awareness and functionality for other brands, shrunk the restaurant field. Domino’s and other counter-service chains were battling for visits in an industry with far fewer options.

As dine-in continues to return, the dynamic is going to tilt. And thus, Domino’s can’t predict the length of this sales leap. To some degree, they’ll return to competing with dine-in occasions as well as other chains that thrive with delivery and carryout.

Black Box Intelligence Monday said quick-service restaurants were able to achieve positive comp sales during the first week of May. To date, it’s the only segment to move into positive sales territory since the pandemic began.

Even more revealing, comp sales in quick service since the beginning of May have actually been better than the sales growth reported by the sector for years, Black Box said.

The NPD Group reported quick-service transactions fell 13 percent in the week ending June 7 versus 2019 levels, a week-over-week improvement of just 4 percent—a sign the category has been stable for a while. Also to note, while transactions might be depressed compared to year-ago numbers, the vast majority of limited-service restaurants have reported a significant bump in order size and average check. Domino’s brought this up during its Q1 review, also noting weekday sales have gained prominence as weekends slip. Lunch and dinner moved up as late night declined, too.

Overall, the restaurant industry experienced an uptick in comp sales during the first week of May, Black Box said, hovering around negative 45 percent. The growth coincided with the reopening of dining rooms in some states.

As restrictions lift and consumers get more comfortable with the process, sales should continue to rise. But it might take a bite out of quick-service’s pandemic boon. Getting closer to the norm could detract a bit as options flood back into the dining-out decision-making process.

How long this takes, however, is anybody’s guess. And there’s the possibility of a second wave, or a swath of customers who elect to avoid dine-out for some time despite being allowed to do so. There are a lot of factors in the pot.

Worth considering, too, the National Restaurant Association said in recent data “tens of thousands” of locations could close. With most projections putting the emphasis on independents and full-serves, quick-service chains might find expansion opportunity on the other side. Not just to compete in a less-saturated landscape, but also to grow prime real estate through conversations and more friendly landlords. Think drive thrus, and lots of them.

Additionally, quick-serves in this “new normal” will be ideal growth targets because they don’t need a lot of square footage to operate, which fits perfectly into a widening consumer shift toward contactless, off-premises service. A potential, optimistic result: More profitable venues with lower overhead and plenty of customers to go around.

So it bears reason to say COVID-19 sparked a lot of quick-service restaurants in recent months. While that will taper off, it could transition to an era of chain-dominated growth and new concept development. Not all that different, once again, from what transpired in retail coming out of the financial crisis. 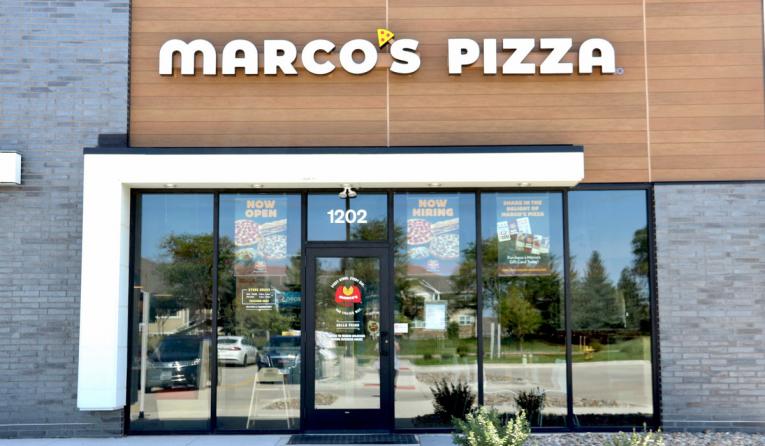 Marco's is another quick-serve that saw its sales rise—up 20 percent from year-ago levels.

As expected, online guest feedback has mirrored crisis times. People aren’t as invested in fast-food Twitter beefs and food reviews. Black Box said chatter progressed from fear to expectations. On day one, talk centered on concerns over getting the virus and sanitation issues. Guests were hyper aware of employee behavior and did not hesitate to call out restaurants when staff appeared sick.

The next phase was support. Customers recognized the dire impact coronavirus was having on their favorite spots and wanted to help out. And they also recognized brands for giving back to their communities and taking extra steps, like selling pantry goods and paper products.

Now, we’re in a period of expectations. Here’s one review Black Box cited: “Tables are not being seated 6 feet apart and server was wiping down different tables with same cloth. Not a good COVID-19 rule experience for a reopen of dining rooms.”

While food and hospitality will always carry the flag, expect no shortage of these kind of reviews. Customers are judging restaurants from a whole new set of demands and expectations. Where credit stems from will be vastly different than before. Something as simple as a virtual waitlist or curbside delivery can turn into a home run Yelp recap.

Crisis times open as much opportunity as they reveal weaknesses and challenges. Returning to the oversaturated landscape compared to today, there are ample chances to separate from the pack. From employee training to empathy-driven marketing to community response to frictionless and contactless tech, and more.

To put it plainly, food quality will share the throne with a lot of operational talking points.

Restaurants have pivoted, and results reflect that. Comp sales for the industry bottomed out in March, falling below 65 percent. The week the first stimulus checks went out in mid-April, restaurants experienced an uptick in sales, and comps have continued to improve since.

But this isn’t a shut-door point just yet. “Demand for dining in by consumers will help improve comp sales for the industry, but operators should proceed with caution. As cases continue to rise in densely populated areas, or places with heavy tourism, guests may still be extra cautious about going out to eat,” Black Box said.

It’s more likely restaurants are in a for a slow-and-steady climb back to pre-pandemic levels. And that’s not factoring what might happen if states force stay-at-home mandates again if cases lift. Or, to Black Box’s point, if COVID-19 positives surge and no official action is taken. Even in that case, will the simple numbers dissuade people from leaving their homes?

Here’s a look at how employee layoffs increased after April.

DailyPay has continued to monitor quick-service hiring trends in recent weeks. In its latest period—May 11 to June 14—it found a 28 percent increase in hiring over the five-week stretch. From May 11 to June 7, it was up 25 percent.

It’s not overly surprising given 69 percent of restaurant units are now in geographies that permit some level of on-premise dining and the number could increase to 74 percent in week ending June 14, according to NPD. Restaurants are staffing up.

The question, Black Box said, is whether or not there will be enough employees to hire.

One in four furloughed workers and two out of three laid-off staff members are not expected to return, the company said. Hourly staff, though, are mostly expected to come back at the same base salary.

In March, when initial furloughs and layoffs began, only 22 percent of managers were affected. Many restaurants saw GMs as a safety valve for restarting when the time arrived. Also, they were most capable of directing skeleton off-premises crews.

Given the historical sales loss, almost half of companies adjusted criteria or performance goals used to calculate bonuses at all levels of restaurant management, Black Box said. The goal being to maintain the validity of their incentive plans in unprecedented times (and inspire retention).

First Watch, in one example, promised to make managers financially whole by providing a bonus upon their return to work to assist with hardship costs incurred as a result of the pandemic and work to close the gap between the federal and state benefits they received and their First Watch salary. Basically, when they came back, First Watch paid the difference in their salary versus what they received in expanded unemployment benefits.

As difficult as it’s going to be to recall workers with UI benefits paying people, on average, well above what they were making at restaurants, cutting compensation doesn’t appear to be an early answer.

Quarantine behavior fueled third-party adoption out of necessity. This is especially true for full-service brands, which came into the crisis pushing roughly 88 percent of their sales within the four walls.

Per Black Box, all of third-party delivery has seen 36 percent, year-over-year guest growth. For quick-serves, the figure is 64 percent. It’s 105 percent in full-service chains.

However, off-premises sales have plateaued in recent weeks. You could thank reopening states for this. Pent-up demand for dine-in remains strong, concerns or not. But speaking to early points, we just don’t know what shifts are in store. Whether that pent-up demand reverses or simply levels out, and what it means for delivery and takeout. How long will people continue to seek safer options? Will adoption during the crisis inspire off-premises occasions down the line, just from heightened awareness alone?

As much as has happened already in these wild four months, the number of unknowns hasn’t dissipated. We’re just getting started.