Wienerschnitzel’s Legacy is in Good Hands with CEO J.R. Galardi

At 33, he's leading the world's largest hot dog chain, and honoring his father along the way.

J.R. Galardi is a realist. He’s the CEO of a 350-unit restaurant chain at 33 years old, and without his last name, he probably wouldn’t have got here, he admits. But while it’s something “always in the back of people’s heads,” Galardi isn’t carrying a chip on his shoulder.

“I want to do my best to make sure I run this business as it should be run,” says Galardi, whose father, John, created the chain in 1961. “Regardless of who my dad is.”

Galardi’s story isn’t your standard birthright. Growing up, he didn’t expect to run the family business and was, in fact, doing the opposite. He had a concert promotion company in Denver after following his father’s advice—to pursue his own interests if it suited him.

MORE: Check out QSR's full list of Young Leaders to Watch for 2022

Yet things shifted when John was diagnosed with pancreatic cancer. Galardi grasped the gravity of what his father, who passed away in 2013, built, starting as a single hot dog stand six-plus decades ago. Galardi didn’t want Wienerschnitzel to “get broken up,” or for private equity to swoop in. “We’re going to continue the upward trend,” Galardi says, “and really make sure that everything my dad worked for stays in place.”

Galardi has a habit of going all-in when he sets course, he says. It drives his wife crazy. And it’s what happened with Wienerschnitzel.

Galardi was promoted atop the world’s largest hot dog franchise in early February. He added CEO to his president title, which he held since 2017. Galardi also stepped into his mother, Cindy Galardi Culpepper’s, role, who stayed on as executive chairman.

In recent years, Galardi says she stepped back and let him learn from the front. That was nothing new. At 13, Galardi helped out at a Wienerschnitzel in Newport Beach, California. He was a janitor, fry cook, and drive-thru window attendant. He even poured beer out of the store’s tap.

When his father got sick, however, Galardi returned with a specific directive—to learn the business while also earning his stripes. On day one, “nobody knew what to do with me,” Galardi recalls. They had him update pricing stickers on a menuboard that hung in the conference room.

“It’s not only that I wanted the perception to be that I just didn’t take over, but also, I’ve been a big believer that you shouldn’t be able to tell people what to do if you don’t know what to do yourself,” he says. “I wanted to make sure that I had a very solid understanding of the business from the ground up.”

Galardi took jobs across the organization, from operations to development to marketing. He started with the latter, which proved a natural extension from Galardi’s events history. Additionally, this was during the “rise of the millennials,” and the best way to reach them, Galardi says, was to market to himself. He created a “Visionary Department” in 2014 that amplified social media, digital, and outreach. They’d connect with events—concerts, Supercross, music festivals—and meet guests by handing out product and talking about the legacy chain. The goal being to get in front of a younger demographic while remaining loyal to a core guest who has stuck around for generations. “You don’t want to alienate them, but you want to attract new business,” Galardi says. 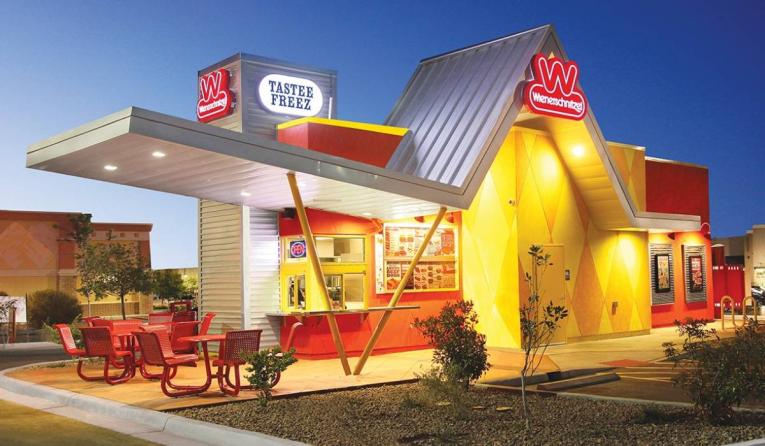 “It’s not only that I wanted the perception to be that I just didn’t take over, but also, I’ve been a big believer that you shouldn’t be able to tell people what to do if you don’t know what to do yourself," Galardi says.

Through this, the brand brought the average age of its diner down from 49 to 44. While the Visionary Department started out as a separate arm of Wienerschnitzel’s business, it’s now integrated within the company’s broader marketing aim. During COVID-19, it got set aside due to the fact events, generally, stopped happening. It’s building back up now, Galardi says.

His marketing role tailed into another position, which carried over into another. And Galardi kept asking questions and figuring things out. One outlet he wanted to explore was philanthropy. Then the company’s “chief visionary officer,” Galardi ignited a program called, “Hot Dogs for Homeless,” partnering with Skate for Change founder Mike Smith. The Hot Dogs for Homeless Tour, which also included Skate for Change CMO Josh Schmitz, visited 20 cities and raised $200,000. It gave away more than 40,000 hot dogs. Another end result—seven people inked matching tattoos of a skateboarding hot dog. Galardi got his on his left arm.

Interestingly, the notion of a Wienerschnitzel tattoo isn’t all that unique, he says. Galardi has seen them on customers plenty of times before. CMO Doug Koegeboehn once even walked into the office and pulled his pant leg up to reveal Wienerschnitzel’s famed pole. “He’s like, please don’t ever fire me,” Galardi jokes.

This kind of loyalty struck Galardi from the moment he rejoined the company. “People live and die by this food. And I get it. It’s delicious,” he says. “But it threw me for a loop. I never experienced it until working in the brand.” 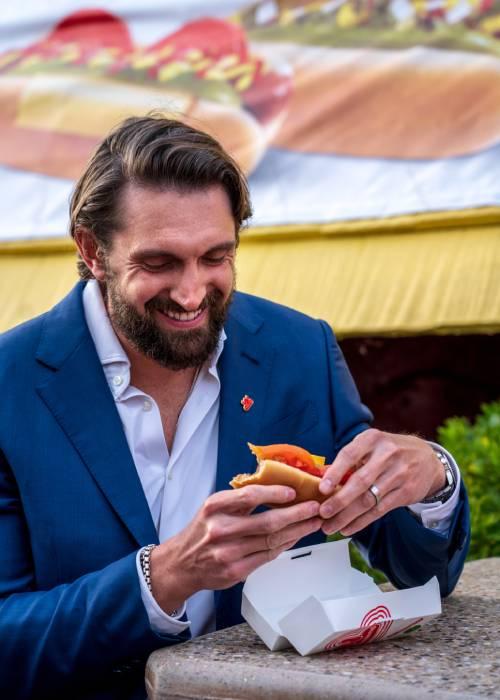 Wienerschnitzel’s unit expansion in recent calendars, however, has been mostly stagnant. Galardi says it’s a product of some external realities—construction costs and the landscape being what it is—and a footprint with perhaps too many variations. He says the chain is working to develop a modular concept to lower costs and improve scalability. Wienerschnitzel has six different main building types and sub-options on each of those. And unlike some other quick-serves, kitchens aren’t standard, either. So the brand doesn’t have the luxury of picking an innovation and rolling. “We have to go to each building type and configure it,” Galardi says. “It’s caused some challenges. I think moving toward a more consolidated and consistent footprint, like a modular unit, will l have a lot of benefits in the future, because we can get footprint consistency. That will help with operational efficiency and equipment rollouts.”

Meanwhile, Wienerschnitzel continues to explore technology and become more efficient. It implemented third-party delivery pre-pandemic and then worked on packaging and streamlining off-premises. It put doorbells on some dining rooms so guests could ring and head in for takeout. The company teamed with Olo to build out its website for mobile ordering. “I think it jumped us probably five years, at least, in the first year,” Galardi says of COVID.

But just as with marketing, Galardi wants to ensure nobody shows up and can’t order because they don’t understand the process. It’s the ever-evolving balance of staying relevant yet not forgetting the consumers who got Wienerschnitzel to the dance in the first place.

Galardi also oversees 13-unit Hamburger Stand and Tastee Freeze, which Galardi Group acquired in 2003. The latter has four units, but is on the menu at nearly all Wienerschnitzels.

Galardi believes both have legs to grow, especially overseas. Hamburger Stand, in particular, appears to be the company’s most viable vehicle, just given the product’s familiarity with international consumers (the hot dog isn’t quite an established daypart outside of America). It incorporates Wienerschnitzel’s menu, which typically mixes about 49 percent of sales.

He can see Tastee Freeze kiosks in malls, movie theaters, and more.

As Wienerschnitzel’s growth unfolds, Galardi will continue to drive his father’s legacy forward. At 33, he’s a young CEO by most measures, in addition to being the founder’s son. “I think definitely in the beginning, when I was in my mid- and early-20s, I would show up to meetings and people would think I was there to set up the projector, bring them coffee,” he says. “Now, I’ve established a good relationship with vendors and franchisees. I’m hoping age is irrelevant and they’ll take me for my merit."