CEO said the company could set a new mark for the entire industry.

Yum! Brands is opening restaurants at a pace unlike anything it’s done before.

The parent of KFC, Taco Bell, Pizza Hut, and The Habit Burger Grill opened a Q3 record 760 net new restaurants, right after setting the Q2 record with 603 net new stores. Year-to-date, the company has debuted a net of 1,798 locations, and only needs 243 more net openings to break the full-year mark (2,040) set in 2019.

The company essentially opened a restaurant every other hour all quarter long.

CEO David Gibbs said if this trend continues, Yum! will “obviously set a record” for Q4, and potentially have an opportunity to set the all-time restaurant industry record for number of stores opened in a year.

“Our franchise system is healthy and well-positioned to invest through the near-term pressures, fueling our development engine and future unit growth,” Gibbs said during the company’s Q3 earnings call. “Our unit growth and sustained sales momentum, despite lingering COVID impacts, only make us more confident in our ability to deliver on our long-term growth algorithm.”

Amid accelerating development, each brand has continued to see positive sales. KFC’s domestic comps lifted 13 percent on a two-year basis, while Taco Bell soared 8 percent and Habit Burger increased 7 percent. Pizza Hut’s U.S. same-store sales grew 8 percent on a two-year stack, with off-premises rising 17 percent. Dine-in grew from Q2 to Q3, but Yum! still posted more than $5 billion in global digital sales, good for a nearly 40 percent mix in the quarter. More than 41,000 restaurants offer delivery around the globe, yet another record the company has set.

Overall, Yum! earned $1.6 billion in revenue in Q3, up from $1.4 billion in the year-ago period. The brand swung a net income of $528 million, an increase from $283 million last year. KFC and Pizza Hut grew core operating profit by 10 percent and 11 percent, respectively.

“Taco Bell company store margins have begun to normalize in the back half of this year due to increased staffing in our restaurants as we return to our historical daypart mix, wage investments, and recent commodity inflation,” CFO Chris Turner said. “While there will be quarterly variability due to the dynamic environment, we are confident in our ability to consistently deliver Taco Bell company store margins in line with our historical pre-COVID levels for full-year 2021 and beyond.”

Turner attributed strong unit growth to a myriad of drivers, the first being unit economics. Franchisees are experiencing strong EBITDA around the world, Turner said, and operators are seeing that turn into improved returns when they build restaurants.

Additionally, development teams are equipped with analytics to better calculate growth plans and are bringing new prototypes to market, such as the digitally driven Taco Bell Go Mobile concept, which now numbers 23 in the U.S. The most recent example is the “Defy” concept, a 3,000-square-foot, two-story model that features four drive-thru lanes, including one traditional and three for mobile orders. 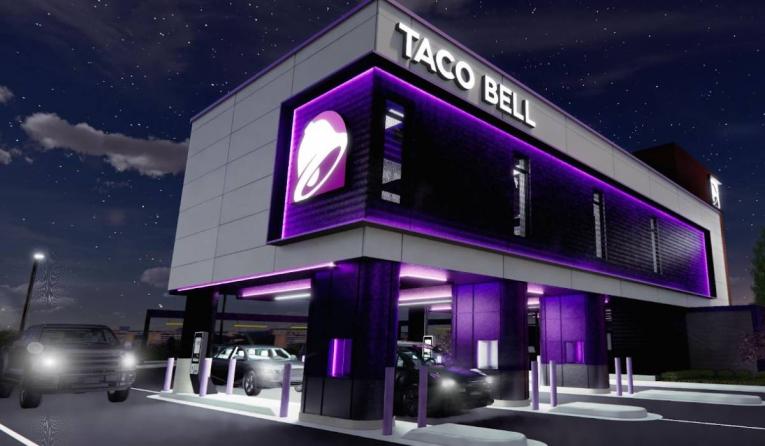 Another key piece is the stabilization of Pizza Hut, a chain that closed a net of 1,063 restaurants in 2020. This year, the brand has opened a net of 368 stores through three quarters. The brand has spent the past few years pivoting from sit-down eateries to a predominantly delivery/carryout model.

“Pizza Hut U.S. is obviously a bright spot for us right now and will be for the long-term as all the work that we've been doing over the last few years investing in digital and capabilities and working with our franchise partners has really started to pay off,” Gibbs said. “ … But it's not immune to the same staffing challenges that everybody is facing."

“I'm sure those sales were held back to some degree by the challenges of getting drivers,” he continued. “We actually saw our carryout businesses now starting to grow faster. When we don't have the ability to get drivers, we're still able to pivot to carryout. We know that there is a lot of demand for what we're offering at Pizza Hut and with a bright future in the U.S."

The Habit Burger, which Yum! acquired for $375 million in 2020, is by far the company’s smallest brand, but momentum is building. Gibbs said demand from potential franchisees—both inside and outside the system—is growing and the company is starting to close a few deals both domestically and internationally.

The CEO noted the restaurant had the biggest hill to climb during the pandemic with dine-in mixing 60 percent, and people have noticed the successful pivot to off-premises and digital operations.

“We closed on two already with Yum! franchisees entering the Habit system and we have more in the hopper,” Gibbs said. “So we're seeing strong demand and interest in becoming Habit franchisees because the unit economics are great to all the reasons why we bought them.”

Even with the record-breaking development figures, Gibbs said supply chain pressures have prevented Yum! from opening as many restaurants as it would like. So there is further upside, backed by the company’s scale, purchasing capability, and the size of franchisees and their access to capital.

“There are certainly going to be some local challenges here and there related to permitting, but again this is where that capabilities that helped us get ahead, plus our larger more sophisticated franchisees who invest ahead, they have sophisticated teams who are driving their development and that's a big asset here, as well,” Gibbs said. “So yeah, we probably left a few units on the table this year as a result of that, but in general, we don't see that as a constraint on our long-term development path.”

Much of the growth going forward will be directed by new leadership. In August, the company announced Kimberly-Clark veteran Aaron Powell as the new CEO of Pizza Hut. He took over for Artie Starr, who became Topgolf’s CEO in April. Also, David Graves, the pizza chain’s U.S. general manager, will be promoted to president of the domestic business in January.

For KFC, Sabir Sami, the brand’s global chief operations officer, will succeed CEO Tony Lowings, who is retiring in March.