The company beat its previous record by more than 1,000.

Fast Food | February 10, 2022 | Ben Coley
KFC
KFC U.S. opened a net of four stores in 2021, which is the first time domestic markets have seen positive net growth in more than a decade.

Yum! Brands CEO David Gibbs knew in November a record-breaking 2021 was all but certain.

At the end of the third quarter, the KFC, Taco Bell, Pizza Hut, and Habit Burger Grill parent only needed 243 more net openings to set a new company mark for a fiscal year. Yum! not only eclipsed 243, but it did so more than five times over.

The restaurant conglomerate debuted a net of 1,259 restaurants in Q4, pushing the year-end total to an unprecedented 3,057 net new openings. The previous record was 2,040 net stores in 2019.

Overall, Yum! added 4,180 gross units, putting an exclamation mark on what Gibbs called “the strongest growth year in our history and setting an industry record for unit development.”

For perspective, that means the company opened a new restaurant on average every two hours. The number of stores equates to more than 100,000 jobs created.

“In my 32 years in this business, I've never seen anything like it, obviously,” Gibbs said during Yum!’s Q4 and full-year earnings call. “The growth rates are industry records; Yum! records. It was widespread. It's across all brands. It's occurring in the vast majority of our countries, which is really encouraging.”

CFO Chris Turner noted China is the biggest developer, but added Yum!’s strength is still broad-based, with more than 2,500 restaurants built outside of the country last year. New units opened in more than 110 countries, which Turner said is a step-up from previous years.

KFC accounted for roughly 63 percent of the expansion, with 1,928 net new openings. That includes 1,924 units internationally and four units domestically. Although the U.S. number appears small, it’s the first time KFC U.S. has seen positive growth in more than a decade.

Here’s a look back at KFC's unit development in the past two decades, per financial analyst firm BTIG:

“At KFC U.S., after several years of same-store sales growth and strengthening unit economics, we have a much stronger foundation now on which to grow in the future as evidenced by the inflection point in development with the system moving to positive unit growth in 2021,” Turner said.

For domestic markets, same-store sales grew 12 percent in Q4 and 13 percent for 2021, both on a two-year basis. Sales were driven by group occasions, digital growth, and the rising chicken sandwich. The menu innovation mixed 9 percent in Q4, up from 1 percent last year. Meanwhile, comps at international markets lifted 3 percent in the quarter, but dropped 1 percent for the full year. 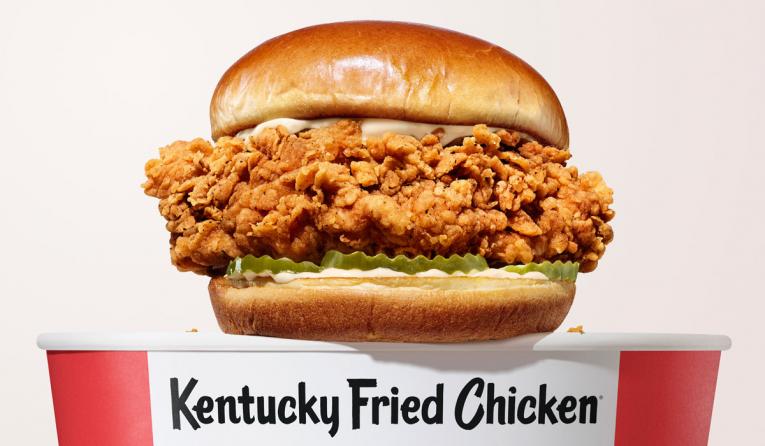 Taco Bell represented 12 percent of Yum!’s net new openings with 364, and ended 2021 with significant domestic and international milestones. In the U.S., Taco Bell reached 7,000, and outside of the borders, Spain became the first international market to surpass 100 units.

The fast-food giant completed 2021 with 7,791 restaurants, including 7,002 domestically and 789 internationally.

Same-store sales increased 9 percent in Q4 and 10 percent in 2021 on a two-year stack. Sales growth in Q4 was fueled by a host of menu innovation, including the Cantina Crispy Melt Taco, Grilled Cheese Burrito, a new lineup of toasted breakfast burritos, and a new Cravings Value Menu.

“Taco Bell U.S. is back to developing at a really fast pace, like in the early days of Taco Bell, we see that accelerate,” Gibbs said. “The Taco Bell International is probably one of the most exciting stories we have right now. We’ve talked about it a lot and you’re seeing over 160 net new units built on a base of 600 entering the year, that’s a 26 percent growth. That’s pretty impressive, and we see that accelerating.”

Out of all the brands, Pizza Hut experienced the biggest turnaround. In 2020, the chain closed a net of 1,063 across the globe as the brand continued its years-long shift toward a delivery/takeout footprint. In 2021, the pizza concept opened a net of 742 stores, or 24 percent of the total net unit growth.

Pizza Hut’s international markets debuted a net of 755 units, while the U.S. declined by a net of 13 stores. Although the company dropped in domestic unit count, it’s still much better than 2020, when U.S. markets closed a net of 745 restaurants.

“Pizza Hut International delivered a record year in development with all international business units reporting net positive growth, led by China and India,” Turner said. “ … Pizza Hut U.S. continues to make progress on its development journey and is poised for future growth, thanks to improved unit economics and a healthy franchise base.”

Habit Burger, although much smaller than its sister concepts, experienced positive growth as well, with net openings of 23 stores, or 11 percent unit growth. The burger brand’s comps lifted 5 percent in Q4 on a two-year basis, and increased 2 percent in 2021.

Gibbs said Yum! Isn’t concerned about pulling back development in any country. As an example, he pointed toward India—a country that opened 335 units last year, and one that should see continued acceleration.

“Even in the U.S., we’re starting to see the momentum develop in our Pizza Hut and KFC businesses where we historically haven’t been contributing net new unit growth,” Gibbs said. “We’re optimistic about that.”

Full-year core operating profit increased 18 percent, driven by same-store sales growth and the impact of unit development throughout the year. Worldwide system-sales grew 13 percent in 2021, with KFC at 16 percent, Taco Bell at 13 percent, and Pizza Hut at 6 percent.