Yum!’s journey through COVID-19 has taken dramatic turns, as you would expect for a global company with 50,000 restaurants. In April, roughly 11,000 of those were temporarily closed. By June 10, it hovered around 5,000, or 10 percent of Yum!’s total system.

Today, closures have slid to fewer than 2,500 units, meaning Yum! is back to 95 percent coverage. Of those outliers, roughly 70 percent are in malls, transportation centers, airports, and the like.

Naturally, the Taco Bell, KFC, Pizza Hut, and Habit Grill’s top line appreciated a boost, as its U.S. business turned positive at all major brands in June and July. The culprit: Massive drive-thru access and a record-breaking rise in digital.

Yum! generated $3.5 billion in digital sales in Q2, a 40 percent year-over-year boom that equated to a $1 billion step-up from 2019 levels. Yum! now has 34,000 restaurants offering delivery globally, up from 30,000 this time last year, and witnessed its digital sales mix cross 30 percent of system sales—a 15-point improvement.

Another key reality is the fact Yum! still has 24,000 dining rooms closed. It’s just a fraction stateside. “So when you look at the results that we're getting, when you talk about our excluding closed stores, we still have a lot of stores that are open with closed dining rooms, it's really quite impressive that we're able to get sales globally back to approaching flat without those dining rooms in the majority of our stores,” CEO David Gibbs said Thursday on a conference call. “So it's not critical to our success. It's obviously something that we will return to over time when it makes sense.”

KFC to Provide $500,000 Worth of Groceries to Employees

Taco Bell Wants to Become the Safest Place to Eat

Progress has varied throughout Yum!’s portfolio. KFC’s closures peaked in mid-April at about 6,000. While it started Q2 with 5,000 temporarily off-line, the brand exited the period with 95 percent back thanks to a “massive effort to reopen,” Gibbs said.

And the digital windfall has been particularly kind to KFC. Gibbs said the company’s direct pickup and delivery launch last October, coupled with aggregator expansion and bundled bucket meals, delivered a “fantastic quarter.” In early May, KFC recorded the highest average sales per store in the brand’s history and finished Q2 with 7 percent same-store sales growth in the U.S. market, which accounts for 16 percent of KFC’s system sales.

“In the U.S., KFC is serving the right occasion at the right time, fulfilling families' needs for delicious meals to take home and unpack around the dinner table,” Gibbs said.

It’s likely the chain’s consolidated same-store sales would have been much higher if not for its legacy dine-in business at “Red Roof” restaurants, which account for about 10 percent of sales and were virtually non-existent in Q2.

Pizza Hut entered the period with more than 3,500 temporarily closures. They peaked, like KFC, in mid-April at 4,000. By Q2’s close, 87 percent of Pizza Huts were running, with U.S. Express units representing half of the remaining closures. Generally, markets that operate a dine-in segment, have significant stores in malls or transportation hubs or include Express units, were hit hardest by government restrictions, Gibbs said.

Pre-virus, Pizza Hut was in the midst of a footprint overhaul as it tried to evolve toward more asset-light, delivery, and carryout-friendly real estate.

The chain closed 278 domestic locations in Q2, while opening 47. Here’s how it’s tracked:

When Yum! first began outlining this Pizza Hut retraction in August 2019, it noted the U.S. system could drop as low as 7,000 locations. So the chain is quickly closing on that projection—it’s cut back 398 stores since Q1 2019.

Sales trends and momentum have picked up in pandemic-saddled months, however. Not unlike Pizza Hut’s category peers (Domino’s comps lifted 16.1 percent in its most recent report; Papa John’s grew same-store sales 24.4 percent in June).

CFO Chris Turner commented briefly on Pizza Hut franchisee NPC International’s bankruptcy filing in July. The 1,200-unit operator defaulted on about $800 million in loans January after it decided to skip payments. It entered the filing with $903 million in debt and negotiated a restructuring agreement with 92 percent of first-lien lenders and 17 percent of second-lien lenders.

Turner said this was an expected development, and one Yum! views as an “opportunity to create a better future for Pizza Hut restaurants owned by NPC, and, therefore, the overall system in the U.S.”

“As the proceedings continue, we expect that there will be some issues that we can resolve with NPC and related parties directly and others that will require briefings and court rulings,” he said. “Ultimately, we will support an outcome that results in a lower, more sustainable level of debt, a higher focus on operational excellence and a greater level of investment for the restaurants in the NPC system.”

Party due to the NPC situation, as well as KFC’s struggles overseas, Yum!’s Q2 bad debt expense related to royalties, rent, and other franchise serves was $13 million, an increase of $11 million year-over-year.

Gibbs said Yum! is “working productively” on the NPD asset base, and “there's lots of interest in that business, and we expect it to be in the hands of a capable franchisee coming out of this process.” 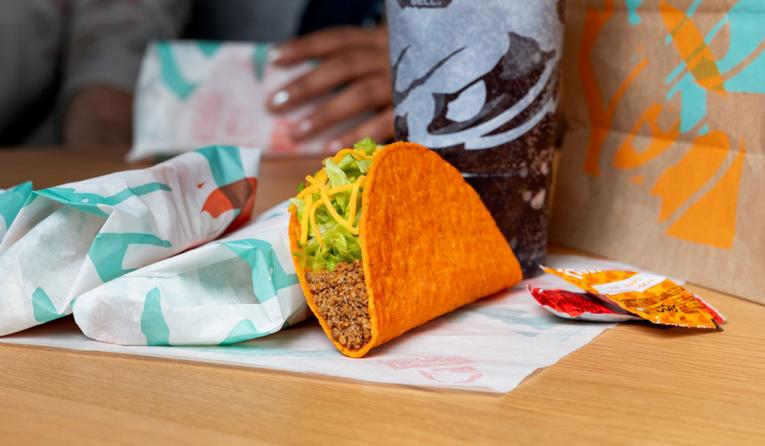 Taco Bell has had the most ground to cover since COVID-19.

Taco Bell surges its way back

Taco Bell’s COVID-19 climb has been steeper than KFC and Pizza Hut. In the U.S., close to a quarter of the brand’s business was dine-in, and it thrives late-night and breakfast. All have been significantly dampened by pandemic pressures.

Taco Bell’s same-store sales declined 8 percent in Q2 off a 7 percent gain in the year-ago period. Temporary closures climbed as high as 500 at the end of Q1, with 100 locations reopening by mid-April. Taco Bell had 97 percent of its restaurants up by the end of this past quarter.

It’s a couple of weeks away from launching a broad menu revamp, too. Taco Bell plans to cut 12 items August 13 in an effort to remove complexity and improve efficiency as safety protocols and execution become an everyday reality of operational life.

Gibbs said Taco Bell added more than a million new users to its active e-commerce platforms through the chain’s mobile app and website.

Despite the negative comp, Gibbs called Taco Bell the “bright spot for the quarter.” On a two-year basis, the brand is basically flat. And if you track from April forward, he said, Taco Bell posted the best results for Yum!, despite having the most ground to cover.

In July, along with KFC and Pizza Hut U.S., Taco Bell charted into positive sales territory. “So that's enormous progress given the hit to their business,” Gibbs said. Taco Bell introduced its loyalty program in July with free Doritos Locos Tacos up for grabs. Enrolled users earn 250 points for every $25 spent, which unlocks an award.

Taco Bell’s operating margin was 34.4 percent in Q2 as it benefits from adjusted operating hours and labor efficiencies.

“When you add all that up, it's the brand with a huge amount of momentum as we come out of the quarter and very excited about the future for Taco Bell,” he said.

Yum!’s newest acquisition, The Habit Burger Grill, which it acquired for $375 million in March, posted same-store sales declines of 18 percent in Q2.

Typically, more than half of the fast casual’s sales flow from dine-in. Given temporary closures ran at about 10 percent throughout the quarter at the 270-unit brand, it “faced a massive headwind,” Gibbs said. Recent trends for open stores are flat to slightly negative, he added.

In the period, the Habit also shifted focus to family meal bundles as digital ordering via mobile and kiosks represented 40 percent of sales.

“None of us could have imagined how Q2 would play out when we made the decision to acquire The Habit, but I'm more confident than ever that the brand and the team will create a new long-term growth opportunity for Yum!,” Gibbs said.