The sandwich chain signed as many stores in the past six months as the previous eight years.
Finance | August 2019 | Rachel Taylor

Potbelly is betting on off-premises as a channel that will boost growth and sales in the future.

Despite a rocky end to the second quarter, Potbelly chief executive Alan Johnson is confident the brand is headed for a turnaround. Weak traffic contributed to a 4 percent drop in same-store sales, but Johnson said the company put several strategies in place to ignite a comeback.

“Turnarounds require an exceptionally high level of focus and patience,” Johnson said during an August 6 conference call. “We need to focus on the right things… Improving same-store sales and traffic trends is our No. 1 priority and we believe we are on the right path, and there are a number of new initiatives that are starting to take hold.”

Potbelly’s growth strategy is shifting, too, as the fast casual looks to infuse more franchisees into the system. In the past six months alone, the brand signed “as many shops as we have in the previous eight years since we began franchising in the U.S.,” Johnson said. The new franchise agreements are the first step to getting momentum going around renewed growth.

Don't Give Up On Potbelly's Comeback Just Yet

“Our enhanced menu expanded off-premises and digital business and shop of the future are really resonating and we feel like the proof of our transformation lies here,” Johnson said. “It's great to see growing franchise momentum and we believe we'll see more success in 2020 and beyond with this low-capital approach to future growth.”

The deals will open 38 restaurants over the next five to seven years in Tampa, Florida, the Carolinas, and Las Vegas.

“It's great to see growing franchise momentum and we believe we'll see more success in 2020 and beyond with this low-capital approach to future growth.” ⁠—  Alan Johnson, Potbelly’s chief executive officer.

During Q2, three new franchise shops opened in the U.S. Two company-owned locations and two franchise locations closed. The company is turning focus to core markets, which means exiting international ones. Six international locations also shuttered during Q2, leaving only one shop abroad in the Middle East, which is expected to close by the end of the year. In Q1, Potbelly opened three new shops (one corporate and two franchises) and shuttered eight, including seven company-run units and one franchised.

Regarding the trimmed unit count, Potbelly execs identified underperforming locations and have closed a majority that are in the bottom 25, Potbelly’s chief financial officer Tom Fitzgerald said.

“More importantly the stores that are now on the bottom list, as those bigger drains have been pulled away, are really not nearly as negative as the ones that we've pulled back on,” Fitzgerald said. “I think in a couple markets where we're subscale and relatively unknown, our comps are quite a bit more negative, but they're not really pulling the average down by any means.”

The brand’s full-year goal for openings revised downward. Instead of opening 12-18 stores, the company now expects to debut 10­­–15. Fitzgerald said four to five company-owned restaurants will open instead of the previous expectation of six to eight restaurants.

“We remain focused on balancing the initiatives to profitably drive same-store sales and traffic with tight cost control,” Fitzgerald said.

Johnson added: “We continue to have positive conversations with accomplished and experienced franchisees who are beginning to see our turnaround initiatives take shape.”

Another attraction for getting new franchisees on board is a fresh restaurant model. A store design was recently unveiled that offers a new look and feel for Potbelly. A more comfortable and relaxed dine-in experience is center to the prototype.

The new design also addresses some of the biggest issues Potbelly is facing right now, Johnson said. The purchase process was simplified with the customer ordering and paying now in one spot. A consolidated menuboard puts all of the options in one place instead of being scattered throughout the shop.

“Customers will also be able to see their food as its being lovingly made by one of our team members,” Johnson said. “This is a big plus and allows customers to see the quality and freshness of the ingredients we use to make great sandwiches.”

The first remodels will open during Q4 in Chicago, he added.

Potbelly is betting on off-premises as a channel that will boost growth. Between catering, delivery, and pickup, it now makes up 20 percent of sales, up 10.1 percent from the previous quarter.

Potbelly doesn’t break down mix, but Johnson said all channels and parts of the sandwich brand’s digital business lifted year-over-year. Despite an overall decline in comps, off-premises managed to expand for seven consecutive quarters.

Potbelly has come a long way, Johnson added. Over the past 18 months, it’s made the ordering process more convenient and easy for guests.

“We have more work to do, but the changes from where we were 18 months ago are dramatic and confirmation that this part of our strategy is working,” Johnson said.

Potbelly recently launched a revamped catering site to provide a seamless experience. Catering is the largest slice of Potbelly’s off-premises business. Potbelly worked with customers to see how they could improve. “… a number of additions,” Johnson said, “including recommendations based on your party size and showing what's popular right now, to spur ideas to easily and intuitively build the order and drive check.”

In-store upgrades are also being made to aid delivery and take-out orders. Each location is outfitted with new pickup racks. Delivery drivers can easily find orders instead of having to wait for an employee to bring it to them. The same goes for guests who are picking up. The racks eliminate friction at the counter, Johnson said.

At the beginning of July, Potbelly also announced its new partnership with DoorDash across all locations. As a part of the aggregator’s vast marketplace, Potbelly shows up whenever someone searches for sandwiches, which helps build brand awareness, Johnson said. Throughout the third and fourth quarter, Potbelly will be featured on different DoorDash promotional windows to reinforce the brand’s presence. Customers can still order through the Potbelly website and app. 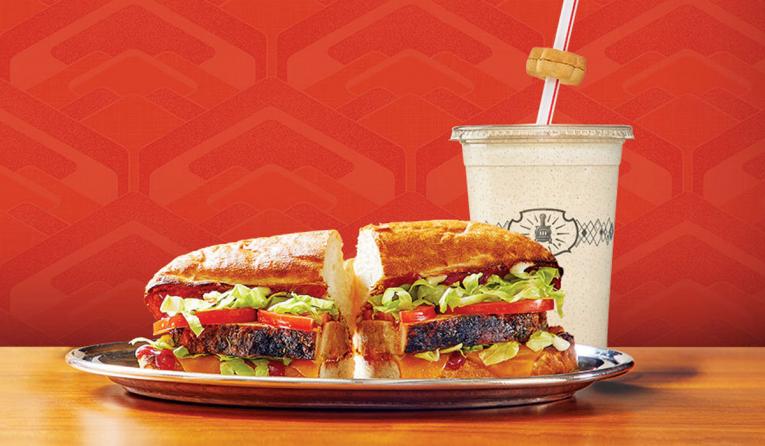 During Q2, three new franchise shops opened in the U.S.

It’s too early to tell how these improvements will affect off-premises down the road—all were rolled out over the past five weeks.

“The first half of the year laid the foundation with a lot of heavy lifting, but we're excited to see how these initiatives perform throughout the second half of the year,” Johnson said.

Johnson believes Potbelly’s new loyalty platform will boost traffic and turn customers into repeat guests. The new Summer Perks program only launched six weeks ago so there isn’t too much data to report yet, but Johnson said he was surprised with the frequency of transactions so far.

During Q2, Potbelly perk registrants increased from 1.3 million to 1.5 million users. Perk members only make up 17.3 percent of sales. Johnson said that number will continue to grow as they roll out more loyalty related promotions.

Potbelly is shifting how it markets loyalty with the hope it will attract new members and different audiences.

“The goal is to create promotions that are more efficient and incremental than what we have done in the past,” Johnson said. “Our focus now is on finding the right balance between marketing and promotions that will drive comps and build brand awareness.”