Inside the 'Aggressive Turnaround' of Luby's

The company continues to battle with an activist investor.
Finance | January 2019 | Danny Klein

Luby's shuttered 21 restaurants in fiscal 2018 and has since closed six more.

Luby’s believes it has a turnaround plan in place, and that its executive team is the right group for the job. But that sentiment hasn’t been shared by activist investor Bandera Partners—a New York hedge fund that owns about 9.8 percent of the company’s shares—in recent months. Bandera put forth four candidates for Luby’s nine-member board in November and has waged a proxy contest ahead of Luby’s January 26 annual meeting, where investors will vote on directors.

On Tuesday, Luby’s struck back with a presentation that not only makes its case for the company’s comeback, but also questions the qualifications of Bandera’s nominees, saying its principal, Jeff Gramm, is not “suited to sit on any public company board.”

Starting with the company’s performance itself, there’s no denying Luby’s is limping into the event. It shuttered 21 restaurants in fiscal 2018 following nine closures the year before. It has since closed six more. Additionally, Luby’s sold 10 properties during 2018. The parent company of Luby’s Cafeteria, Fuddruckers, and Cheeseburger in Paradise saw its same-store sales decline 0.5 percent systemwide in 2018. Total sales for fiscal 2018 were $365 million, including $332 million in restaurant sales, compared to total sales of $376 million, including $350 million in restaurant sales, in 2017. The chain has a market capitalization of about $45 million.

In December, it was reported that only one Cheeseburger in Paradise, in Secaucus, New Jersey, remained. That after an Omaha, Nebraska, restaurant shuttered in October. "Unfortunately, it was already challenged when we purchased it in 2012 and continued to face headwinds since," Lisa Lee, vice president of brand and marketing strategy, told the North Jersey Record. "We had to make a tough decision to close underperforming locations. We also converted a few locations into Fuddruckers.”

Luby’s bought the brand in 2012 for $11 million when there were 23 restaurants scattered across 14 states. The company does not refer to Cheeseburger in Paradise throughout the presentation. It instead focuses on Luby’s, which had $210.9 million in annual revenues last year; Fuddruckers ($88.1 million); and Luby’s Culinary Services ($25.8 million).

Luby’s Cafeteria’s same-store sales rose 3.9 percent in Q4. This was comprised of a 10.3 percent increase in average spend per guest offset by a 5.8 percent decrease in traffic. It marked the second consecutive positive quarter of comps for the chain following a 2.4 percent lift in Q3.

Fuddruckers’ same-store sales declined 3.9 percent in Q4 and rose 0.6 percent for the year. The chain’s traffic dropped 8.3 percent in Q4. Cheeseburger in Paradise restaurants witnessed a 10.5 percent comps decline for the fiscal calendar with a 4.4 percent drop in Q4.

Luby’s said in Tuesday’s presentation that change is already underway at Luby’s, “and the board and management team are executing on an aggressive turnaround plan” to improve financial and operating performance.

Luby’s noted that its CEO, Chris Pappas, reduced his annual salary to only $1 “in recognition of the fact that Luby’s business needs to improve.” This isn’t expected to change until sales pick up. Luby’s, founded in San Antonio in 1947, has been led by the Pappas brothers since 2001.

Chris and Harris Pappas hold beneficial ownership of about 34 percent of the company. They have co-founded and run more than 90 restaurants during their careers, including the Pappadeaux Seafood Kitchen, Pappasitos Cantina, and Pappas Bros. Steakhouse brands.

Luby’s said Bandera demanded a third of its board seats and threatened to nominate an opposing slate of directors if its demands were not met within 48 hours of receipt of its proposed term sheet. It also claims that its request to interview two of Bandera’s nominees was denied. “In our view, this may be due to the fact that Bandera’s nominees do not have the appropriate skillsets, experience or track records to justify replacing Luby’s highly qualified nominees,” the company said.

It added that Bandera has “exhibited a pattern of confusing and concerning behavior, which calls into question whether Bandera principal Jeff Gramm—or anyone nominated by him—is suited to sit on any public company board.”

Bandera has roughly $150 million in assets and has been in business since 2006, including 10 as a Luby’s investor. This is Gramm’s first proxy contest. Per Reuters, he said of Luby’s, “We are tired of years of unfulfilled promises at the company and excessive director and executive compensation. We feel there needs to be change in the board room.”

Bandera offered to settle with Luby’s back in November. It demanded an answer within 48 hours and then revoked its settlement agreement. In a letter sent to shareholders Thursday, Luby's went after Bandera's history and nominees. It said, "In 2017, Bandera formed a group with other activists to wage a proxy fight against Fiesta Restaurant Group Inc. Fiesta’s shareholders overwhelmingly voted to re-elect all three Fiesta directors with vote margins between 89 and 97 percent [excluding the dissident group’s shares]instead of the nominees proposed by Bandera and its group."

It said William Philip Gramm, Hock, and Singh lack restaurant industry experience and that Singh owns "no Luby's stock to the company's knowledge and "seems to be highly occupied with other executive and board roles."

"We believe Mr. Singh has no capacity to truly represent Luby’s shareholders—especially in a turnaround situation that requires a great deal of time, experience and attention," the company wrote. Hock, Luby's added, also had no Luby's stock to the company's knowledge or "relevant expertise or skillsets to help Luby’s maximize its potential." William Philip Gramm also does not own any Luby's stock to the company's understanding.

"For example, he claims to have 'led' an equity recap of Denny’s in 2004 while working at Mellon HBV Alternative Strategies LLC," Luby's said. "We find it hard to believe that Mr. Gramm 'led' anything in his first year out of business school."

We’ve been here before

Luby’s credited broader pressures for some of its struggles. The company cites fast-food chains, independents, grocers, C-stores, and other to-go outlets for stressing the casual-dining segment overall. “Many casual-dining chains have suffered ongoing traffic declines as generational preferences change and fast-food restaurants attract customers with cheaper price points,” the company said. In turn, chains have turned to heavy discounting to maintain market share and restaurant-level operating margins are under increasing pressure from rising minimum wage levels and a competitive hiring environment.

Luby’s has been here before, though, the company said. In 2009, Luby’s same-store sales dropped 8.9 percent “primarily due to declining traffic and dining frequency.” Store-level profit fell to 10.7 percent compared to 13.5 percent in 2008.

The company responded with a cash flow improvement and capital redeployment plan, which called for the closure and sale of 25 underperforming stores; a focus on sales development, labor productivity, as well as food and operating cost management at the core locations; and an increased emphasis on the expansion of Luby’s Culinary Contract Service. There were 30 locations of Luby’s Culinary Services as of November 7, which provide foodservice management as an amenity to healthcare, higher education, and corporate dining facilities.

Below, according to Luby’s, is what followed. 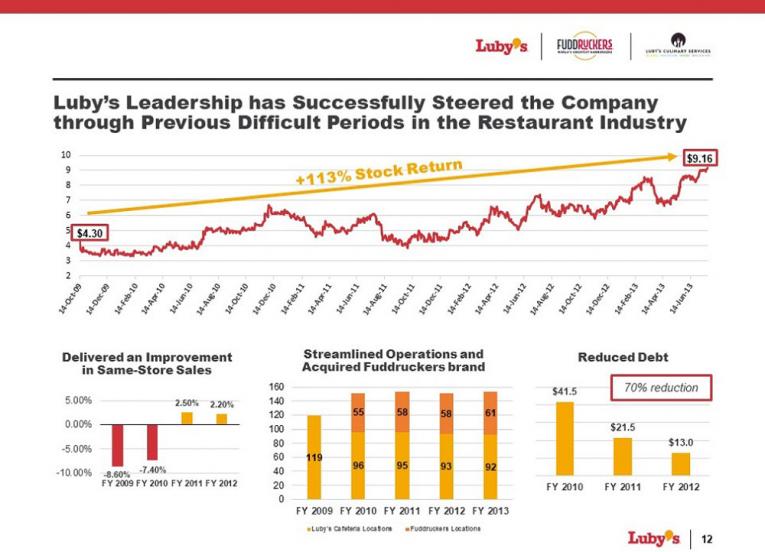 Luby’s broke down in further detail how it plans to accelerate results.

On the topic of raising awareness, the company said it’s developed new menu options at Luby’s and Fuddruckers.

Luby’s believes it needs to balance value with innovation moving forward. At the same time, it will supplement with marketing efforts and value campaigns that differentiate its offerings, drive additional traffic and spending, and build “customer goodwill.” Luby’s also said Fuddruckers has potential to become a worldwide brand and that Luby’s retail products can be leveraged to foodservice management, like corporate dining facilitates and higher education.

On the topic of strengthening operations

Luby’s same-store sales boost last quarter was driven by a 10.3 percent increase in average spend per guest, which speaks to a larger change—one that can be seen in discontinued discounting and the removal of promotional offers used in the past.

Luby’s began development of a digital loyalty and recognition program for each of its brands centering on “surprising and delighting our guests through engagement rather than merely discounting.”

And stepping inside the optimization process …

Luby’s, as noted before, closed 21 undeperforming company stores in fiscal 2018, with 13 of those shuttering within the last month of the year. It has closed an additional six restaurants since.

The company said it plans to deploy proceeds from the closure and sale of locations into stores that show the most promise for enhanced profitability. It will balance capital-intensive investments for new development as well as remodels to stay competitive and continue to close locations and sell company-run property at certain venues, it said.

Put in straightforward terms, Luby’s said taking short-term focused actions would be a disservice to shareholders over the long-term.

In February, Luby’s announced the addition of Twila Day, the former CIO at SYSCO, to its slate of director nominees for the upcoming meeting. This would increase the number of independent directors and bring the total number of female directors to three, or one-third of the board.

Luby’s noted, again, Pappas’ $1 salary and the expectation that he will keep it there until the company’s turnaround efforts bear fruit for Luby’s shareholders.

Some other actions include:

The rights plan was adopted, the company said, not in response to any takeover bid or in reaction to Bandera or another activist.

Overall, Luby’s said its executive leadership is aligning compensation with its turnaround, which ensures the success of Luby’s is in their best interest.