Checks under $5 and those over $5 are both fueling sales increases.

For the second straight quarter, Jack in the Box saw positive transaction growth.

It may not sound like much, CEO Darin Harris said, but considering the industry’s current reliance on growing average ticket to create sales, it’s a monumental win. Same-store sales leapt 10.2 percent in Q3, or 16.8 percent on a two-year basis, driven by a balanced mix of check and transaction growth. Breaking it down further, franchises rose 10.3 percent while company-run stores lifted 9 percent.

“This is not only something we are very capable of consistently due to our ability to provide both value and premium offerings to guests who want it, but it is also certainly the most sustainable way for us to grow sales and compete,” said Harris, discussing Jack's transaction momentum.

The balanced approach of value and premium increased visits from customers with higher incomes while also maintaining growth of high-frequency guests. Harris said core premium items like the Buttery Jack continue to help sales, and value items like Tacos and the Jumbo Jack support growth. The chain saw checks under $5 move to normal levels and sustained improvement from checks over $5.

Jack leveraged LTOs to drive customers into restaurants, as well. In the third quarter, Popcorn Chicken upsells were the highlight, although Harris said the innovation “almost performed too well.” Jack in the Box wasn’t able to continue with the product even though customers were craving it, which didn’t sit well with Harris. However, the team pivoted to the biscuit sandwich platform, including the Cheddar Biscuit, which also did well with upsells. Then there were $3 to $4 add-ons like Mini Munchies, Mac & Cheese Bites, Roost Fries, and Chocolate Croissant Bites.

“That's a part of what's working is our menu strategy,” Harris said. “Our overall strategy of listening to our guests and giving them the offers they want. And then lastly what I would add to that is our dayparts. We're seeing growth across all dayparts and specifically at late-night. We continue to know that that's a huge opportunity for us to take share if we can continue to service it well.”

When it comes to those new guests in particular, Jack is using digital growth to become more culturally relevant. The best example was the One in a Milli Virtual Restaurant, launched in Q3 in partnership with award-winning artist Jason Derulo. The delivery-only concept was available exclusively on Uber Eats for two weeks in June, and featured such items like the Milli Meal—Triple Bacon Cheesy Jack, Roost Fries, and Mini Chocolate Croissant Bites. Also in June, Jack hired Kyra Media to build its TikTok, a growing social media platform among Gen Zs.

Harris believes the digital channel, along with more 1:1 marketing efforts, is a “strong opportunity for us in maximizing guest satisfaction as well as creating sticky, frequent customer behavior." So far in 2021, Jack has grown its digital mix close to 8 percent, and increased its database by 30 percent. The company recently rolled out in-app ordering and launched its first loyalty program, as well.

“I think we've created some behaviors by bringing some customers back, as I mentioned, our new customers and our infrequent customers,” Harris said. “We're seeing their frequency go up, which hopefully we've introduced them to new flavors and new experiences at Jack that keep them wanting to come back and trade some of their former dining dollars into [quick-service restaurants] because of the experience and the flavors and the quality that we've given them.”

“And so, that's part of our overall crave strategy here at Jack in the Box is to drive guests to our restaurants that have craveable products that want them, that keep them coming back,” he added. “I think that's a part of it between digital and just making the right product introductions to innovation and value.” 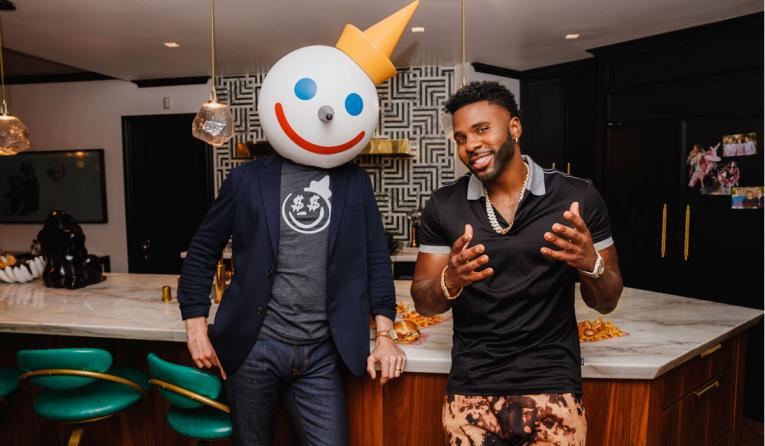 Jack in the Box attracted new customers when it launched a virtual concept with hip-hop artist Jason Derulo.

As Harris has noted for several months, rising sales and traffic have motivated franchisees to entertain more development opportunities. Jack finished Q3 with 2,219 restaurants systemwide—2,080 franchises and 148 company-owned. Four stores opened in the period while 13 closed, but Jack anticipated this as it worked to build communication with franchisees. The chain doesn’t expect the rate to outpace historical averages. Additionally, most of those closures include agreements for offsetting locations, meaning those stores continue to pay royalty and rent contribution until the new, offsetting units become operational.

Jack has painted a much brighter future. During its Investor Day at the end of June, the company said it was capable reaching 4 percent unit growth in 2025, operating in 40 states by 2030, and expanding beyond 6,000 restaurants in new and existing markets. In 2021, Jack has completed development agreements for 64 restaurants, which will be spread out over time. Harris said it will take between 18 to 24 months to see Jack’s growth strategy truly come to fruition, but the beginning stages should start in 2022.

“We will get there by learning from our past to improve fundamentals, solidifying our unique brand position to potential guests in a strong fashion, and most importantly providing a franchise opportunity like no other in [the quick-service restaurant segment],” Harris said.

“ … With the improvement in our economics year-to-date we're up about $90,000 in just overall unit economics. The franchisees are aligned," he later noted. “They're showing the desire to grow. And I anticipate another good quarter with more development agreements coming.”

In terms of dealing with the volatile costs market, Jack saw commodity inflation of 5.7 percent in Q3, compared to an increase of 1.7 percent in Q2 and 1.6 percent in Q1. Despite the inflation, Harris said the brand is in a good position because it serves multiple proteins, allowing it to utilize a variety of promotions to run business effectively and profitably.

When it comes to labor, inflation was 8 percent, rising from 6.3 percent in Q2 and 4 percent in Q1. The CEO said Jack has spent the majority of its time focusing on staffing dayparts in which demand is present.

"Like everyone in the industry, I would love to be making sure we could service and keep our stores staffed at all levels of the day, because we would take these results and improve them even more than what they already are," Harris said. "But the industry as a whole as you know are challenged by this. " ... If we know that we can staff late-night or hours when our business is there and the demand is there, we want to make sure we're staffing it."

Total revenue in Q3 rose from $242.3 million last year to $269.5 million. Restaurant level margin remained flat at 25.4 percent or $23.4 million, while franchise level margin improved to 43.3 percent or $76.9 million. Net earnings increased to $40 million for the third quarter versus $32.6 million a year ago. Adjusted EBITDA was $79 million in Q3 compared with just under $73 million from the prior-year period.