Jack in the Box Pivots to More Value

Bundles and a refreshed message, as well as drive thrus, are on deck for 2019.
Finance | February 2019 | Danny Klein

Jack in the Box's sales and traffic are lagging competitors.

In regards to value, Jack in the Box has stuck to its long-term guns. Avoid deep discounting, especially in the face of rising labor costs. Yet the 2,241-unit burger brand is losing some ground, CEO Lenny Comma admitted following Jack in the Box’s first-quarter 2019 report.

Per The Street, Jake Bartlett, an analyst with SunTrust Robinson Humphrey, wrote that decelerating traffic and widening same-store sales underperformance as a whole show “that [Jack in the Box] remains at a disadvantage in the current value-oriented promotional environment.”

The chain’s traffic fell 3.3 percent at company run stores in Q1 versus a 2 percent increase in the prior-year period. Same-store sales upped 0.5 percent at company-run units and declined 0.1 percent at franchised stores (less than 200 of the brand’s total footprint is corporate).

That negative 0.1 percent figure lagged the quick-service sandwich segment by 3.2 percentage points for the comparable period, according to The NPD Group’s SalesTrack Weekly. If you break down the company-run 0.5 percent lift, it comprised of average check growth of 3.8 percent, offset by a 3.3 percent decrease in transactions.

There’s further proof Jack in the Box’s value play was stressed. For the first seven weeks of Q1, same-store sales tracked down 1–2 percent. The chain then pivoted to a more value-oriented approach, Comma said. The effect? Sales turned positive for the remainder of the quarter. Bartlett estimated the boost at 1 percent in the final nine weeks following the introduction of a value-priced BLT Cheeseburger Combo, a $4.99 promotion, and $3 Loaded Fries.

Permanent items, like 2 tacos, the Breakfast Jack, and Jr. Bacon Cheeseburger, as well as margin-friendly combos and bundled products priced below $5, are where Jack in the Box’s value hovers. But the entire structure is about to ramp up and adjust to meet marketplace demands.

"When it comes to the value consumer, we're all actually competing against each other. So where the share is being lost, it's being lost to those players who I think are speaking loudly and playing well to the value-oriented customer. That's who's winning today.” — Lenny Comma, Jack in the Box CEO.

In 2018, about half of the brand’s marketing calendar featured promotions the company defined as “value-priced.” This year: more than 80 percent are planned.

In Q2 already, Jack in the Box offered a $4.99 Sourdough Patty Melt Combo and a $4 Fish Sandwich combo. That kind of indulgent, differentiated value has been a Jack in the Box staple over the years. Yet is it enough for today’s guest?

The chain is pushing forward with bundles that showcase premium items and new news, like LTOs, as well as indulgent snacks and sides that sit around $3. How it tells the value story upfront will be critical, too. For instance, Jack in the Box recently witnessed a significant sales and transaction gap with premium items sold alone compared to in bundled format. Simply, the latter returned much sweeter results. Comma said that could change long term, but right now, it’s working, and Jack in the Box would like to see more franchisees adopt the structure.

In regards to the add-on strategy, Comma said, customers often pick snack or side items on their own to access a low price point. But more frequently, they tack them on to different combos or an entree, which drives average check

This is especially important for Jack in the Box given its unique brand equity. Unlike many chains, it splits its base pretty much evenly between value-oriented customers and those who associate its menu with “more craveable, indulgent” items they can’t find elsewhere in fast food.

“And so when we put the indulgent snack or side out there, the value consumer has a high take rate, because it's cheap, but the more crave-hunting consumer takes it as an add-on, because they're not so price-sensitive, they're just looking for that indulgent item that fills that need,” Comma said.

He added that value is “probably the No. 1 situation that we’re dealing with.” And it comes down to what’s happening elsewhere in the restaurant industry.

Those chains that are winning are essentially doing one of two things, he said. They’re selling a lot of a la carte items cheaply, and have a lot of brand equity in that space—customers know they can stretch their buck there; or they are selling abundant value where guests expect a significant amount of food for the dollar. 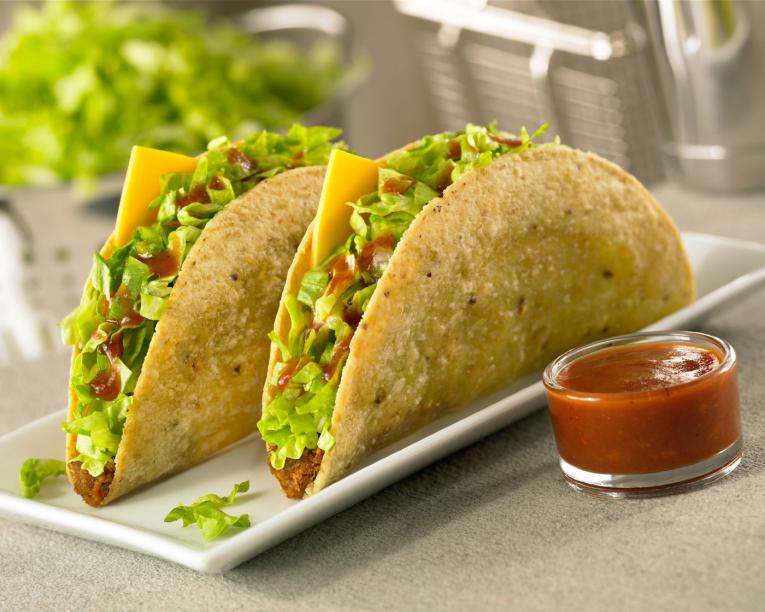 Jack in the Box Inc

Jack in the Box sees 70 percent of its business come through the drive thru.

This conversation extends from fast casual to fast food to casual dining, Comma said. “But when you look at it as just one industry, what you'll see is that abundant value and cheap à la carte items are actually prevalent across all segments of our industry,” he said. “And when it comes to the value consumer, we're all actually competing against each other. So where the share is being lost, it's being lost to those players who I think are speaking loudly and playing well to the value-oriented customer. That's who's winning today.”

That leaves brands like Jack in the Box, which toe the value line in hopes of guarding brand and cost initiatives, dropping transactions as value customers head elsewhere. There’s also the incremental profitability with combos over value at the dollar level, Comma said. And that’s an equation that changes by the brand, but is important to Jack in the Box’s long-term vision.

The BLT combo, for instance, drove sales and transactions but didn’t report a huge negative impact to Jack in the Box’s margin rate. At the same time, it showed improvement in dollar margins.

When it comes to bundles, it’s not as simple as just putting discounted core menu items in a box, either. Throughout 2019, Jack in the Box will launch fresh menu items within bundled value in the form of premium LTOs that have traditionally hit the menu. In the past, though, Jack in the Box marketed those offerings in an unpriced fashion. And, generally, as a la carte items. This time around, customers will see the value offering upfront due to the marketing and bundled message.

Another impending change, Comma said, is Jack in the Box’s chicken offerings. The company has taken price aggressively in the category in recent years. What it’s discovered, though, is that a few offerings within the mix are generating the majority of sales. Meaning if the company can refine the chicken menu to get the right size, price, and offering, it could “potentially generate a nice increase,” Comma said.

Promotional activities and chicken LTOs are coming in 2019 to help Jack in the Box collect data and, eventually, overhaul the category. It represents that “most significant opportunity for improvement,” Comma said.

Drive thru changes arriving in force

Jack in the Box previously announced it was working through significant drive-thru updates. About 70 percent of the chain’s business follows through the channel. Of the remaining sales, roughly half are take-out. So if you look at strategic priorities, Comma said, it makes sense why drive-thru enhancement should be the No. 1 area of focus for Jack in the Box’s capital investments.

Throughout most of fiscal 2019, Comma said, Jack in the Box will test the initial elements of what it expects to be a major overhaul of the drive-thru experience. It plans to start rolling out these changes across the system later in the year. By the end of fiscal 2021, he added, Jack in the Box believes the changes could touch more than 80 percent of its system.

Jack in the Box remodeled more than 50 restaurants since the beginning of last year, including 12 that were refreshed in Q1. And construction is underway at 17 additional franchised locations.

Earlier, the company said it would invest $30–$45 million on drive-thru enhancements and remodels. Here were some of the early targets, although the test is intended to adjust what’s most important over time.

Jack in the Box plans to implement digital menu boards to give the chain an “opportunity to advertise and interact with guests more dynamically,” Comma said.

It is adding menu-board canopies with the goal of using outside order takers to make the experience more personal, and to facilitate speed and consistency. This is something Chick-fil-A has done effectively in many of its locations.

Jack in the Box also expects to “dress up the drive-thru lane with various points of purchase, landscaping, and modest improvements to make sure that we look crisp,” Comma added.