A new menu and tech stack will fuel future momentum.

EBITDA improved significantly to $1 million in Q2, compared to a loss of $10 million in the previous quarter, and adjusted EBITDA rose to $1.9 million versus negative $6.6 million in Q1. Those enterprise profit achievements are far ahead of what Potbelly originally thought it could accomplish. Previously, the brand didn’t expect profitability until the second half of 2021.

The strength in profitability flowed from strong top-line sales. Comps decreased 0.7 percent against 2019 levels in the second quarter, but turned positive in June. Drive-thru and suburban stores are seeing the best recovery in same-store net sales and have been in the black for several months, while urban and university locations turned positive in the second quarter. Airport and central business district units are still seeing negative sales, but Wright said they’re continually trending in the right direction.

However, Wright wanted it to be clear that Potbelly isn't just riding the wave of recovery.

“Rather, we are taking very calculated and proactive actions to accelerate our near and long-term growth through our 'Traffic-Driven Profitability' strategy," Wright said during the chain’s Q2 earnings call.

One of those key initiatives has been a new simplified menu, which completed the testing phase with “very successful results.” The upgraded menu features consolidated menu boards and a wider price ladder, in addition to product enhancements like making every sandwich available in Potbelly’s skinny variety and making half-sized salads available outside the Pick-Your-Pair offering. There’s also large-sized options with more meat, cheese, and toppings, and more variety like the Avocado Turkey Sandwich and Steakhouse Beef Sandwich.

READ MORE: Potbelly Will Be Ready for the Restaurant Rebound

Wright said the ultimate objective of the upgraded menu is to improve traffic and enhance the guest experience while driving customers’ perception of value and simplifying operations. The new menu will roll out to the rest of company-owned and franchise locations in the coming weeks.

The improved menu also factors into how Potbelly will approach pricing going forward. Wright explained that historically, the brand took significant price for years in the low-single to mid-single digits with the expectation that it could raise check and not sacrifice traffic. That strategy didn’t work well. With the new menu, testing has shown a balance of average check and traffic. Wright said that’s a far more healthier relationship with the customer than taking price on food that’s already being sold.

“We've re-engineered [the menu] so that we're getting additional check,” the CEO said. “We really like the margins on that new menu. We're very pleased with how that blends out. That's where a lot of the testing came in, as where people would shop on this new menu so that our margins can be maintained, and yet we get the check that gives us the same leverage as price without the customer just taking pain on price increases. We think going forward, it's also a structure that allows us to be very smart with how we can surgically take price when we need to and do so in a way that's in alignment with the customers' expectations for our brand.”

“So we've thought very carefully about the exact pricing that we're taking to market with this national rollout as well,” he continued. “And looking at every nickel and every dime that makes sense for the menu, but at the same time, understand the pressures we're getting, particularly on labor with some of the legislative wage increases.” 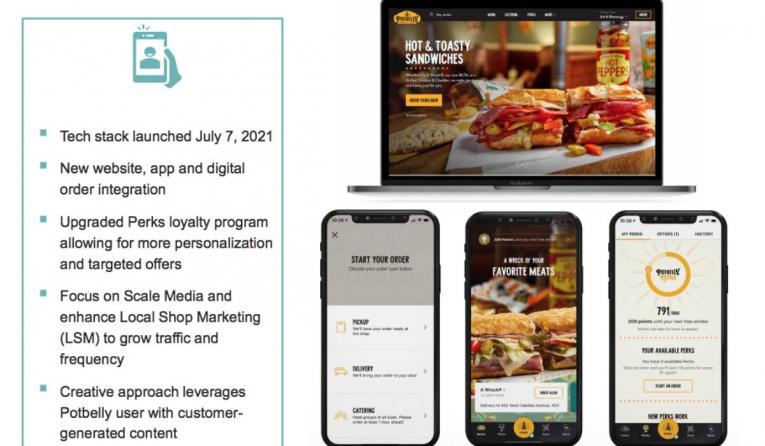 In the second quarter, the chain’s Perks Loyalty Program added 142,000 members, good for an increase of 4 percent year-over-year.

Another major tenet of the Traffic-Driven Profitability strategy is the launch of a refreshed tech stack, which includes a new mobile app and website and integration of digital ordering and the loyalty program. Wright described the new platform as having a design that’s more aligned with Potbelly’s branding and more user-friendly for core customers.

Potbelly’s digital channels have stuck fairly well since the end of last year. In Q4 2020, digital mixed 41 percent, while in-shop represented 49 percent of sales. In July, digital dipped slightly to 39 percent while dine-in rose to 52 percent. In the second quarter, the chain’s Perks Loyalty Program added 142,000 members, good for an increase of 4 percent year-over-year. Sales from the loyalty program lifted 35 percent compared to the prior-year period, as well.

With the updated tech stack, Potbelly now has multiple platforms to effectively target and draw customers toward its new menu.

“You'll see the menu celebrated on the web and on the app. As we do that we'll also continue to do what we did in our test markets with our paid social media to bring that to life,” Wright said. “There will be some more traditional [local store marketing] elements to create some local excitement and some enthusiasm for that. And then the last lever, of course, is our Perks program, which customer facing the Perks program kind of continues to work the way that it did before the Tech Stack launch. But as we've shared, the engine that runs that Perks program, it's a completely different partner with a lot more capabilities for us to dig into that data and create those one-to-one relationships.”

Potbelly expects the sequential sales lifts, along with the new menu and tech stack, to fuel future franchise development. In May, the sandwich shop appointed Larry Strain as chief development officer to lead the upcoming growth strategy. The industry veteran has more than 25 years of experience and previously held real estate and store development roles with McDonald’s, Dunkin’ Brands, and Starbucks. Wright said Potbelly has a healthy pipeline of inquiries from potential franchisees because of brand recognition, under-penetration across much of the U.S., various industry connections, and the leadership team’s combined restaurant experience.

Talks of development come a little more than a year after Potbelly mulled the closure of up to 100 locations that weren’t profitable prior to the pandemic. However, only 28 shut down. The chain ended Q2 with 443 stores—398 company-operated and 45 franchises. Potbelly projects three to five franchise openings in 2021, with new locations already opening in Tampa, Florida, and Cary, North Carolina.

The secret to success is Potbelly's unit-level economics, according to Wright.

"We've got the top line, the margins, and the investment economics are going to be very, very attractive," the CEO noted. "We believe that we can be selective with the people that we bring on. And again, with [Strain's] experience, the rest of the team, I think we can be very intentional and planful as we think about how to develop.”

Total revenues increased by 24.9 percent to $97.5 million compared to $78.1 million. Based on the progress made during Q2, Potbelly expects positive cash flow from operations to continue through the second half of 2021. As of June 27, the company had $11.8 million of cash on hand and $23.5 million available under the revolving credit facility, for total liquidity of $35.3 million