With stagnant U.S. traffic, the coffee chain is eager to expand fresh parts of its business.
Finance | April 2018 | Danny Klein

Starbucks is ready to engage new customers and build its afternoon business.

Meet the “occasional customer.” It’s Starbucks answer to stagnant U.S. traffic—which has been stuck in neutral for two consecutive quarters.

The coffee giant reported same-store sales gains of 2 percent for the U.S.-heavy Americas region in Q2. This consisted of a flat change in transactions offset by a 3 percent lift in ticket. In other terms, Starbucks isn’t driving comps growth through traffic stateside.

Even with a plethora of available excuses—competition from local coffee houses and quick-service counterparts (like McDonald’s and McCafe, for example)—Starbucks doesn’t want these figures to become its new reality. And target No. 1 is activating a under-engaged customer base and daypart.

READ MORE: What the Starbucks arrest and reaction teaches us.

Chief operating officer Rosalind Brewer, who assumed the role October 2 after serving on Starbucks’ board, spoke about the brand’s plans in Thursday’s conference call. The former president and CEO of Sam’s Club said 15 of the 75 million customers who visit Starbucks each month are members of its Rewards program. But the “occasional customer,” who visits one to five times a month, largely doesn’t have a digital relationship with Starbucks. In turn, they aren’t as aware of new product innovations or core offerings.

“In fact, over this past year, only one in four of these non-Starbucks Rewards occasional customers were aware of our new offerings and key promotions as compared to nearly double that of our frequent Starbucks Rewards customers,” Brewer said. “And these customers make up nearly 50 percent of the volume sold in the afternoon, which is greater than their share of other dayparts.”

“Said more simply, these customers are a material part of our current afternoon challenges,” she added.

Afternoon traffic and engaging with customers not in this base is a serious target for Starbucks. The brand’s past strategies, of releasing bold, short-term LTOs, and engaging customers via all-inclusive Happy Hours, didn’t trigger significant long-term audience lift.

Brewer said Starbucks is slashing the number of time-limited offerings by nearly 30 percent versus a year ago.

“Our new approach to marketing will be centered on meaningfully strengthening customer relationships by increasingly targeting our offers to each customer. While we still have unique products such as Crystal Ball Frappuccino, our focus will shift to leveraging platforms with broader appeal,” she said.

For example, Starbucks’ Blonde Espresso, initially slated to only have six weeks of marketing support, is now being marketed throughout the balance of the year.

Singular offerings are shifting to more personalized offers as well. Starbucks’ revised Happy Hour is a prime example. In the past, Starbucks offered a special on a Frappuccino over a short term to anyone and everyone, Brewer explained. “This worked for a few years as the lift we saw in the period following Happy Hour covered the cost of the discounts. But the past two years has not worked from a profitability standpoint,” she said.

Starbucks’ revised promotion, announced in late March, was the company’s first extension of the event since 2010. Now offers are invitational only and presented throughout the year with single-use digital coupons. Customers sign up through the Starbucks app or directly through email.

“The new program will be used to sign customers up for direct digital relationships and to promote the great variety of beverages that we offer all year long. This one-to-one offer will leverage our personalization capabilities and drive significant incrementally,” Brewer said, adding that the Q2 rollout allowed Starbucks to appeal to customers outside of its Rewards program, something its lacked access to in the past.

Part of this push, which includes a heavy focus on afternoon business, includes the continued innovation of cold beverages. Iced beverages contributed nearly 40 percent of Starbucks overall revenue growth in Q2 despite it being one of the coldest quarters in the company’s fiscal calendar.

In Q3, expect to see cold foam, a creamy froth layer typically association with hot beverages, and the introduction of a new Frappuccino. Brewer said the drink, set to release next week, would become a core offering within Starbucks’ blended platform.

Brewer said Starbucks is launching a focused campaign around afternoon starting May and extending through August.

“We are also looking at our afternoons in a different way. We know that the afternoon customer is looking for refreshment, and they are really interested in cold brew. So the new offering that we'll have in the product line is around cold brew, refreshers, and teas,” Brewer said.

Reducing the LTOs by 30 percent will also give Starbucks “a chance to simplify the work in the afternoon so that the partners can engage with the customers so you'll get both the experience when you're in the Starbucks café,” Brewer added.

"All companies make mistakes; great companies learn from them and improve. And that is exactly what we intend to do," Starbucks CEO Kevin Johnson on the brand's recent controversy in Philadelphia. 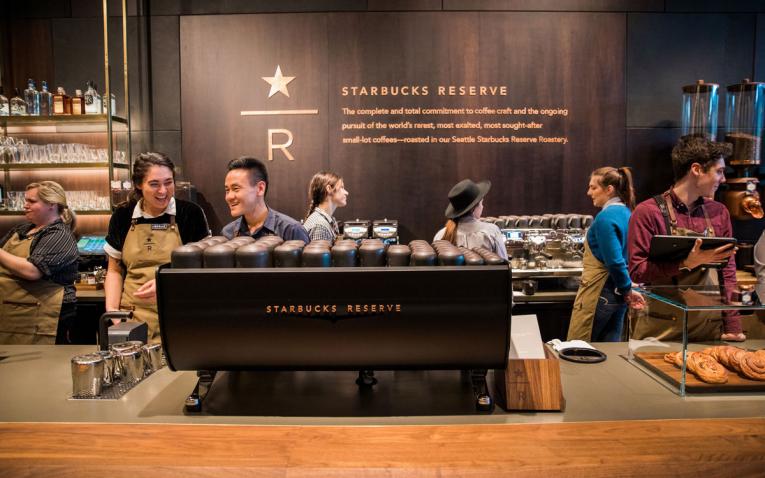 Siren Retail and Roastery stores are a big part of Starbucks' future growth.

Starbucks is growing its digital flywheel and engaging “occasional guests” through WiFi signup in stores, and opening mobile order and pay to all customers.

“Together these initiatives and related efforts will generate a few million additional registered customers by year-end, and we are already running ahead of our expectations,” chief executive officer Kevin Johnson said.

Other initiatives on the table include Starbucks’ continued foray into the food side of its offerings. Food’s share of total U.S. sales was 22 percent in Q2, up 100 basis points versus the prior year. Starbucks is in the process of expanding its Mercato lunch platforms, starting with San Francisco this month, to reach nearly 1,800 stores across six markets by the year of fiscal 2018.

There are plenty of other avenues for Starbucks to drive revenue, like additional openings, Siren Retail and other fresh concepts, as well as let its booming China business, where comps rose 4 percent in Q2, raise the needle.

“These stores will feature Reserve coffees, Princi food and design elements from the Roastery in markets across the globe. We will build on a solid foundation with the opening of our Milan Roastery in September and our New York Roastery in November. Tokyo and Chicago will follow in 2019. The potential opportunity for Siren Retail over the next decade is significant as it represents the finest of experiential retail around all things coffee, and we're off to a solid start,” he said.

The company opened 468 net new Starbucks in Q2 and now has 28,209 stores across 76 markets. Starbucks closed 298 Teavana stores in the quarter as well. Scott Maw, chief financial officer, said Starbucks is on target to open 2,300 net new units globally in fiscal 2018. Starbucks reported consolidated net revenues of $6 billion, up 14 percent over the prior year, in Q2. Starbucks' quarterly net income was $660 million, or 47 cents per share, compared with $653 million, or 45 cents per share, a year ago.

Johnson spoke of the global opportunity, especially in China. He painted the potential by saying Chinese guests drink one-half cup per person of coffee versus 300 cups per year per person in the U.S. “So you look at that math, that means it's over 1,200 times the opportunity size as the U.S. in terms of consumption,” he said. Its Shanghai Roastery is generating twice the dollar volume in a day than a regular Starbucks.

Johnson also addressed Starbucks’ recent controversy stemming from the arrests of two black men in a Philadelphia café, and the viral video that was posted by a bystander. Read more about it here.

Johnson said the incident hasn’t hurt sales in the U.S.

“I am personally committed to act on several fronts to ensure it never happens again. The closing of our stores for racial-bias education on May 29 is a small piece of a set of ongoing actions that will systematically be woven into our processes, training, and culture moving forward. The value Starbucks provides to our partners, customers and shareholders is not only through our coffee, but also through our brand, culture, and ethos. All companies make mistakes; great companies learn from them and improve. And that is exactly what we intend to do,” he said.