Starbucks expects to have nitro hit all company-run U.S. stores by the end of 2019.

For the second straight quarter, Starbucks sailed analyst expectations, which, given where it was just a few months ago, is a welcomed reversal of momentum. The java chain’s global same-store sales rose 4 percent, driven by a 3 percent increase in average ticket, in Q1 fiscal 2019, reported Thursday afternoon. That beat the average estimate of 2.8 percent, according to IBES data. Starbucks’ quarterly net revenue climbed 9.2 percent to $6.63 billion, surpassing a call for $6.49 billion. Arguably more promising, Starbucks’ U.S. market also saw a 4 percent lift (the same as last quarter) in comps while traffic was flat—an improvement from a fall in visits during the final quarter of fiscal 2018. In Q3 of 2018, Starbucks’ global same-store sales crawled 1 percent, the lowest since it began sharing financials on its investor site in 2011.

Before breaking apart the successful period, driven largely by an improved holiday campaign over the previous year, let’s dive into something else that flashed for Starbucks this quarter—something that hasn’t look this bright since 2015.

The power of loyalty

Starbucks active Rewards members upped 14 percent in Q1 to 16.3 million people. That’s an increase of a million new Starbucks Rewards members in a single quarter. Roz Brewer, Starbucks’ chief operating officer, said the company hasn’t achieved that kind of growth in close to four years. What’s notable about this, other than the obvious, is that Starbucks is really just on the cusp of pushing more digitally registered customers into its rewards program.

To strengthen its digital ecosystem, CEO Kevin Johnson added in Thursday afternoon’s conference call, Starbucks widened the aperture of its digital reach and created a funnel of activation that is leading to more active Rewards members. Since the chain started those efforts last spring, Starbucks acquired 13 million digital customer registrations. Again, those aren’t necessarily loyalty members. They’re guests who have engaged digitally with Starbucks, either through email signups or other promotions, like Happy Hour deals, but aren’t locked into the Rewards base.

As for why the actual Rewards core grew so much, Johnson said it “was driven by leveraging our increased digital reach as well as a more seamless customer onboarding experience, greater mobile order and pay adoption, and enhanced personalization features.” 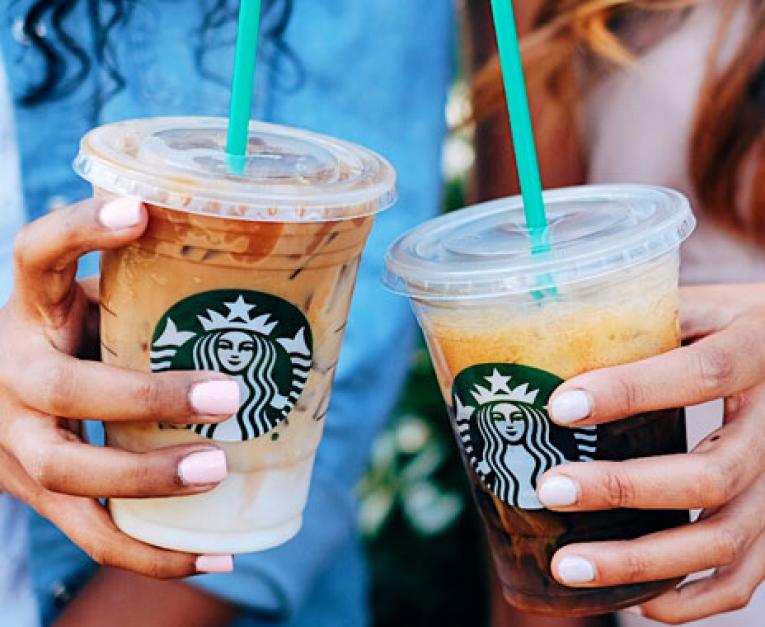 Starbucks' beverage innovation, across all dayparts, continues to be led by cold offerings.

But take this full digital picture into consideration: Right now, Starbucks has close to 30 million U.S. customers connected digitally between its Rewards program and its digitally registered base.

While Starbucks continues to drive customer data into the equation from multiple angles, it's conducting back-end work to improve the loyalty platform. This way, the company said, those guests who are already engaged will keep coming back. And those who funnel in from the digitally registered arena will have a compelling reason to do so.

This spring, Johnson said, Starbucks will enhance its Rewards program to enable loyalty customers to earn and redeem more quickly, and to redeem those rewards across a broader range of items in-store. “We have leveraged learnings and customer insight from prior changes to the Rewards program to inform our work ahead of this launch,” Johnson said. “This includes a robust marketing activation plan to drive not only awareness of the changes but overall awareness of the program and key customer benefits.”

“As we have shared in the past, lack of awareness has historically been one of the limiting factors to customer adoption, and we have a significant opportunity to amplify a powerful message around loyalty,” he added.

Coming in Q2, Starbucks’ will launch a multi-tier redemption program. This will allow Starbucks to provide additional access to customers, Brewer said. It also offers benefits broadly to the non-Rewards members.

Brewer said it would still be a transaction-to-spend based program, just with a larger range of opportunity. Some benefits will include: Customers being able to redeem from the start—no more levels to hurdle such as instant goals. There will be options to redeem faster. Engagement will benefit from lower thresholds for items and add-ons, Brewer said.

“Choice and flexibility are really at the heart of this program,” Brewer said. “And we really believe that it’ll increase the overall appeal of the program to these individuals that we’ve not been able to attract straight into the Starbucks Rewards program.”

Brewer said Starbucks continues to grow its business at peak in the morning, which is also where the chain sees its strongest Rewards customers. Also, Starbucks is seeing spend-per-member increase on Rewards transactions—a trend that has defined the program since day one.

On a side note, the delivery rollout that’s headed to 2,000 stores by spring? Starbucks is working to make it so guests can access Starbucks Delivers through the Rewards app.

Additionally, with those digitally registered customers, Starbucks has been able to learn plenty that can help it drive sales, Brewer said. For instance, by watching their spend levels, Brewer said, Starbucks noticed that non-Rewards members tend to shop more in the afternoon. It’s helped the chain tailor beverage innovation and make sure it’s meeting the targeted customers right where they want to be. 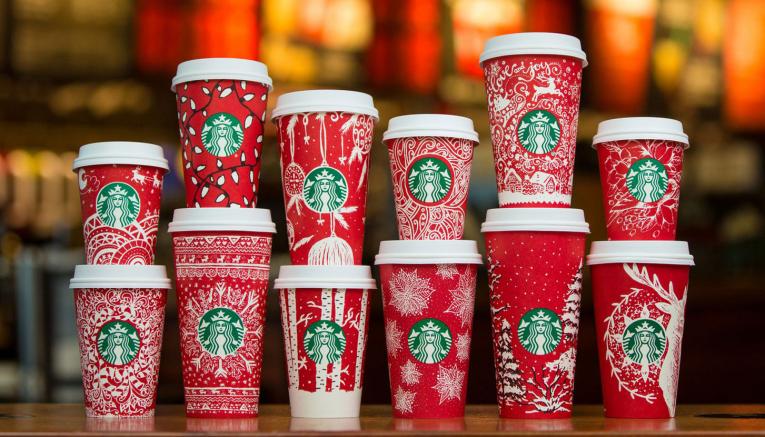 This time a year ago, Starbucks admitted that its limited-time holiday beverages, gift cards, and merchandise underperformed, which drove down transaction comp. It pushed same-store sales down more than a percentage point. That wasn’t the case in 2019.

“Our holiday plan was informed by insights we gathered from customers who highlighted what they appreciate from Starbucks during the holidays,” Johnson said.

For the second straight quarter, beverage, Starbucks’ highest-margin category, was the primarily driver of U.S. comp growth, contributing three of the four points. Food represented two points and lobby took it down one point.

This was anchored by espresso and brewed platforms, which delivered the highest contribution to same-store sales growth in nine quarters, Starbucks said. Notably, iced beverages led the growth across all dayparts, with strong performance from Starbucks Refreshers, iced espresso, and iced coffee, particular cold brew and nitro, said CFO Patrick Grismer, who joined Starbucks from Hyatt Hotels in October.

Starbucks expanded the deployment of its nitro offering from about one-third of U.S. company-run stores last quarter to 40 percent in just one period, and remains on track to hit 100 percent penetration by the end of fiscal 2019, Johnson said. “Draft nitro beverages represent a significant opportunity for the brand,” he said. “This platform is differentiated, provides theater, and drives incrementality.”

Growth, and some other figures

Starbucks opened 541 net new restaurants in Q1, bringing the total to 29,865—a 7 percent lift over the prior year. More than two-thirds of that net growth took place outside of the U.S. and roughly 50 percent were licensed.

In the Americas, Starbucks ended the quarter with 17,644 locations, which represents a 5 percent year-over-year increase from the 16,837 stores at the end of December 2017.

Starbucks’ China same-store sales upped 3 percent in the quarter as it reached 8,789 locations.

The chain said it expects to open about 2,100 net new locations globally in 2019m including more than 600 in the Americas.

Net earnings fell to $760.6 million from $2.25 billion a year earlier, reflecting nearly $1.8 billion in gains last year from acquisitions and the sale of some businesses. Excluding one-time items, the company earned 68 cents per share, beating estimates by 3 cents.